Moneyball for the Huddled Masses

In a thought-provoking piece in Politico Magazine , Professor Justin Gest proposes a “Moneyball Fix” for America’s immigration system.  Taking a page out of sports analytics, he suggests that the federal government analyze immigration data it could consolidate or collect to determine which pre-admission characteristics predict prospective immigrants’ “success as Americans.” Success would be defined by the government in power.  Admissions priority would go to visa applicants analytically deemed likeliest to meet its criteria.

Gest’s idea injects creativity, innovation, and fresh perspective into a stale and increasingly partisan debate over “merit-based” immigration reform.  But, for all its intuitive appeal, Immigration Moneyball offers at most minor improvement in exchange for significant risks.

To see why, consider a narrow definition of immigrant “success”: net economic contribution.  Gest reflects the views of most Americans in seeing merit also in family values, humanitarian goals, diversity, social engagement, and political participation.  But analytics can only clarify moral tradeoffs – say, the cost in GDP of reuniting a family or rescuing a refugee – not resolve them.  Policy goals must be determined politically.  Among the many measures of success governments might choose, economic success is one of the most well-defined and quantifiable.  If analytics have limited utility in ascertaining which immigrants would contribute most economically, they would have even less chance of illuminating what predicts more subjective and less quantifiable dimensions of success.

There are at least three reasons to doubt that analytics would tell us which prospective immigrants are poised to contribute most to the nation’s economic well-being.  First, each immigrant’s marginal contribution depends greatly on which other immigrants are admitted and the characteristics of the existing immigrant stock. Backward-looking algorithms would be poorly equipped to assess these complex dependencies. Perhaps algorithms would indicate that an engineer tends to contribute more than an agricultural worker in the current context, where STEM-trained immigrants are in short supply.  But this cannot tell us how many more or fewer of each type should be admitted to optimize total immigrant contribution.  The contribution of each engineer might diminish as more are admitted in response to the algorithm’s output, rendering the analytically determined estimate of their future collective contribution of little value.  Moneyball transformed how baseball teams scouted shortstops far more than how many teams signed.  Analytics might marginally influence our choice between two engineers in the same field but not how many we should admit to optimize immigrants’ aggregate economic contribution. 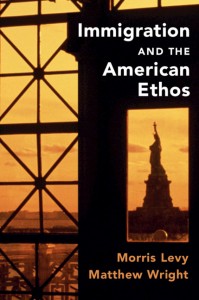 Could analytics help with the relatively modest goal of choosing between two immigrants from the same occupation or skill level?  Even here, Moneyball would furnish dubious information.  For one, it would be compromised by a phenomenon known as Goodhart’s Law. When a predictive metric becomes a target, it becomes a less valuable predictor. Transparency dictates that the immigration technocrats would disclose their key metrics of interest, just as the Federal Reserve Open Markets Committee releases minutes of its deliberations.  Aspiring immigrants would be aware of which characteristics count and could tailor their profiles accordingly.  If previous trips to the U.S. work in one’s favor, those with the means will visit more often, potentially diluting the predictive value of the metric as those with the will – and especially the means – check the right box.  If the current system is plagued by “line-jumping,” as Gest asserts, immigration Moneyball would be no more equitable.

For another, a sound assessment of immigrants’ economic outcomes requires a long-time horizon. If baseball players flop in the minors, they do not reach “the show.” But immigrants who take longer to get their bearings in America may be just as or more successful in the long run than those who hit the ground running. So why not take long-run outcomes into account? The problem is that information gleaned about previous cohorts’ success will be badly out of date by the time it can be applied to choices about new prospective immigrants. Taking this further, one of immigrants’ deepest aspirations is that their children will enjoy prosperity and success in America that they themselves can only dream about. This is why nuclear physicists and surgeons in their home countries run corner stores and become Uber drivers. But by the time information about the predictors of success among second or third generation immigrants could be harvested for use in future admission decisions, it would be generations old and likely invalid.

Even marginal insights would be worth it if they came without any downside.  But immigration Moneyball comes with serious political risks. Delegating immigrant admissions to technocrats gives a politicized bureaucracy a free hand to manipulate measures, targets, and models with no need to build broad public consensus behind change. Allowing administrations to determine their own measures of success, within parameters set by Congress, could make admissions policy erratic. Worse, bureaucrats could tilt the playing field with declarations of “invasions” or “national emergencies.” In theory, checks and balances and bureaucratic neutrality can rein in such behavior. Americans should ask themselves how reassuring they find this in light of recent political events.

Moreover, information gleaned or brought together by a government agency on individual immigrants would be ripe for abuse.  In fact, this is already happening.  To the chagrin of civil liberties groups, the Immigration Customs Enforcement Agency (ICE) has for some time been pursuing analytical systems to “evaluate an applicant’s probability of becoming a positively contributing member of society, as well as their ability to contribute to national interests,” including propensity to terrorism and criminality, allegedly on the basis of everything from social media posts to requests for special meals on airplanes (an indicator of religion).  It would be naïve to think that information collected by one immigration agency wouldn’t fall into the hands of another, claiming some national security need.  Of course security vetting has an important place, but the breadth of data required for Immigration Moneyball to work – information on immigrants’ voting records, civic involvement, employment record, family history, and so on – would greatly compound risks to civil liberties of immigrants and native-born Americans alike.

Perhaps the most insidious downside of a thoroughgoing analytic approach to immigrant admissions is that it implies immigrants’ eventual success as Americans to be tied more to what they were than what they aspire to become.  This undermines a great source of national pride and self-confidence: the defining conceit of a “nation of immigrants” that anyone, not to say everyone, can thrive on the fertile soil of freedom.

For all the hand-wringing about a “broken” immigration system and losing talented immigrants to more merit-conscious and analytically sophisticated global competitors, the legal admissions status quo in the U.S. has much to recommend it.  America’s newcomers are prospering and contributing.  Gest notes that family-based immigrants stack up well against their “highly skilled” counterparts. And public support for immigration has dramatically risen in the U.S. over the past quarter century.  A “Moneyball” approach to immigration policy would jeopardize this success in the pursuit of unclear goals and uncertain gains. And as the late, great Yogi Berra reminds us, “If you don’t know where you’re going, you might end up someplace else.”

About the Author: Matthew Wright

About the Author: Morris Levy