On 31 October, 2019, a massive fire tore through the UNESCO World Heritage site of Shuri Castle in Okinawa, sparking a global reaction and comparisons with the devastating fire at Notre Dame, another World Heritage site. The New York Times and other outlets reported that Japanese officials had expressed alarm and concern about the vulnerability of domestic sites like Shuri Castle after the fire in Paris in April 2019. Over the past several years, threats to World Heritage sites from conflict, development, and environmental changes have received widespread coverage and immediate responses from around the world. These responses have also been controversial, as in the case of Notre Dame, with the global media attention and celebrity support for fundraising contrasted with a perceived lack of coverage for humanitarian disasters occurring elsewhere. Another controversy has concerned the site itself, as commentators have pointed out that much of the appearance of Notre Dame was the result of modern additions from the architect Eugène Emmanuel Viollet-le-Duc in the nineteenth century, rather than being “medieval” heritage. 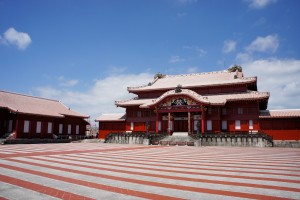 Image: The Main Hall of Shuri Castle before the fire. Photo courtesy of Wikimedia Commons

In Japan, the destruction of Shuri Castle throws up similar issues, but also sparks much more complex debates. Fortunately, like Notre Dame, the fire at Shuri Castle did not result in any casualties. Like Notre Dame, the immediate response was that the site would be rebuilt. Furthermore, although international headlines focused on the “500-year old world heritage site” and “600-year-old Shuri Castle complex,” they also mentioned that the castle had essentially been rebuilt in 1992 before being designated a World Heritage site in 2000. The focus of coverage has generally been on the role of Shuri Castle as the symbol of the former Ryukyu Kingdom, which conquered and ruled various parts of the Ryukyu Islands, from about the fifteenth century. Shuri Castle is an important site for many Okinawans, and more than ten million US dollars towards reconstruction were raised in the first month after the fire.

After Shuri took over the surrounding islands, it was in turn conquered by Japanese forces, who effectively controlled the Ryukyu Kingdom from the early seventeenth century and formally incorporated it as Okinawa Prefecture in 1879. Shuri therefore had a difficult and ambivalent relationship with Japan as well as with various islands that made up the kingdom. The Okinawan identity now symbolized by Shuri arguably formed from the late nineteenth century as a response to Japan’s efforts to integrate the islands. Okinawans were often victims of discrimination, a trend that culminated in the 1945 Battle of Okinawa. Hundreds of thousands of Okinawans were killed in the conflict, including at the hands of Japanese troops enforcing a policy of “compulsory mass suicide”. 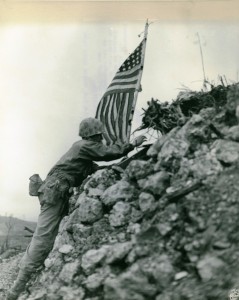 US Marines raising the flag atop the ruins of Shuri Castle after the Battle of Okinawa. Image courtesy of Wikimedia Commons

With Okinawa in ruins, Japan surrendered before the Allies advanced to the Japanese main islands. After the war, Okinawa remained occupied by the United States until 1971, leading to further resentment among Okinawans that they were being sacrificed by Tokyo. Even after the reversion of Okinawa to Japan, the United States has kept an outsize military presence in the islands. Although Okinawa is less than 1 percent of Japan’s territory it hosts about half of the 54,000 US troops stationed in Japan. This has resulted in great tensions between Okinawans and the US military, as soldiers and civilians live in close proximity. Accidents, crime, and sexual assaults by Americans against Okinawans are prominent issues, and contribute to a widespread sense of victimization in Okinawa as they shoulder an excessive burden from the US military presence relative to the rest of Japan.

In this complex situation, Shuri Castle is a highly significant site. For many Okinawans, the reconstruction of the castle and its recognition by UNESCO were great sources of pride in their heritage. At the same time, this process erased much of the problematic history of Shuri Castle and Okinawa as a whole. In the late nineteenth century, like dozens of other castles throughout Japan, Shuri Castle became a military site. The castle was later turned into a shrine in the 1920s as part of an effort to preserve the decaying buildings. Just like castles on the mainland, however, the Imperial Japanese Army repossessed Shuri Castle, turning it into their headquarters bunker. As a result, Shuri became one of the main sites of the Battle of Okinawa, and was almost completely destroyed in May 1945.

Like other castles, Shuri Castle was demilitarized after the war, and the transition to a new age was symbolized by the establishment of Ryukyu University on the castle ruins in 1950. Many other castles in Japan were similarly transformed from military sites to sites of culture and education, hosting universities, museums, parks, and sports facilities.

As elsewhere in Japan, the desire to erase of the modern military past and recover pre-imperial heritage was strong in Okinawa, and in the 1980s it was agreed to remove Ryukyu University to another site and to rebuild the original Shuri Castle using traditional techniques and materials. The focus at Shuri Castle was placed squarely on its older Ryukyuan heritage before the turmoil of the modern period. The castle’s message was epitomized by the Shureimon – the gate of courtesy that features on the 2000-Yen note. Ryukyuan heritage was presented as peaceful, glossing over the long history of Shuri’s dominance over other Okinawan islands (Shuri, after all, was a heavily fortified castle). The battle scars of the Second World War were also largely erased along with the university. 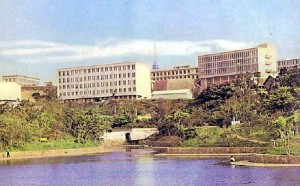 Ryukyu University in Shuri Castle in the 1960s. Image courtesy of Wikimedia Commons

The Shuri reconstruction was completed in 1992, the same year that Japan’s most famous castle, Himeji Castle, became one of the nation’s first two UNESCO World Heritage sites. Himeji Castle had also served as a major military base until 1945, and this legacy has also been largely erased as the public history of the site focuses almost entirely on the pre-modern period. Another former military base, Hiroshima Castle, has similarly removed most traces of the modern military, and its focus is a 1950s concrete reconstruction of the castle keep that was destroyed by the atomic bomb. 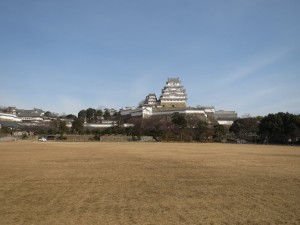 Himeji Castle in early 2018. The large open field below the keep contained Imperial Japanese Army barracks through the end of the Second World War. Photo by the author.

The issues of authenticity discussed in the case of Notre Dame are also important in the case of Japanese castles, but they are compounded by the fraught modern history of these very prominent sites. The great keep of Nagoya Castle, the largest in Japan before being destroyed by American bombs, was rebuilt out of concrete in the late 1950s, and that structure is now being demolished to make way for an “authentic” wooden reconstruction to be completed by 2022 at a cost of more than 500 million US Dollars. At the same time, its modern history has been largely erased, as Nagoya Castle also served as a major garrison until 1945. The same is true of the Imperial Palace in Tokyo, which was the central site of the imperial succession ceremonies that marked the beginning of the Reiwa period in May 2019. The legacy of the site as the Imperial Castle and garrison of the Imperial Guard through the Second World War is largely obscured. Osaka Castle, another former military base, refurbished its popular concrete keep in the late 1990s, and Prime Minister Abe Shinzo was roundly criticized for mocking the presence of elevators in the castle during the G20 Summit in June 2019. This controversy reflects tensions between authenticity and accessibility that are also erupting in Nagoya. 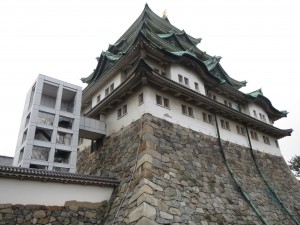 The concrete Nagoya Castle keep in January 2018, shortly before being closed for reconstruction from wood. Photo by the author.

Image: The concrete Nagoya Castle keep in January 2018, shortly before being closed for reconstruction from wood. Photo by the author.

The important symbolic role of castles can be seen in Kumamoto, another former garrison site with a 1950s concrete keep and little evidence of its military past. When the region was struck by major earthquakes in 2016, much of the public focus was on the castle, with drone footage of the damaged keep broadcast around the world. At least 50 people were killed and thousands injured, but the castle became the most recognizable image of the disaster and its reconstruction symbolizes Kumamoto’s efforts to recover. The recent burning of Shuri Castle sparked reminders of Notre Dame abroad, but in Japan it also brought memories of images of the wartime destruction of Shuri Castle, Nagoya Castle, and other important heritage sites.

The cycles of destruction and reconstruction of Shuri Castle should be seen in the context of broader developments concerning castles in modern Japan, which we discuss in our recent book, Japan’s Castles: Citadels of Modernity in War and Peace. As attention turns towards the reconstruction of the structures that were lost in October 2019, old and new controversies over the site may well come to the fore. Concerns over authenticity may be sidelined by larger debates concerning the humanitarian, political, and symbolic issues surrounding Shuri Castle’s turbulent and tragic modern history. 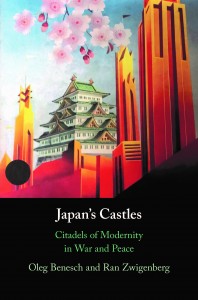 Japan’s Castles: Citadels of Modernity in War and Peace by Oleg Benesch and Ran Zwigenberg

About the Author: Oleg Benesch

Oleg Benesch is Senior Lecturer in East Asian History at the University of York. He is the author of Inventing the Way of the Samurai: Nationalism, Internationalism, and Bushido in Modern Japan (2014)....

About the Author: Ran Zwigenberg