With permission of the Canonesses of the Holy Sepulchre

Between c.1600 and c.1800, nearly four thousand women left England for mainland Europe. They were not just travelling for the sake of it, or embarking upon some form of Grand Tour; rather, they were escaping stringent penal laws against the practice of Catholicism in England that forbade any institutional expression of Catholic religious life. In mainland Europe, this tide of female religious refugees first founded and then entered a series of convents that would survive for the next two centuries. Despite the uniqueness of this endeavour, this English conventual movement was largely excluded from the scholarly landscape because of a double disadvantage, first their gender and then their religion rendering them invisible to a great many researchers.

However, during the last decade there has been an upsurge in scholarly interest in women religious more generally, and especially the members of the English convents in exile. Stimulated in part by the ‘Who were the Nuns?’ project, which was funded by the Arts and Humanities Council, this surge in interest went hand in hand with the revival of early modern English Catholicism as a growing and vital field to understanding the political and religious dynamics of the time.

The English conventual movement was unparalleled in the early modern period. After the foundation in 1598 of the first English convent to be initiated since the dissolution of the monasteries was established in Brussels, it was followed by a further twenty-one foundations across Flanders and France, which all self-identified as English institutions in Catholic Europe. In addition, there was one continuation from the pre-Reformation period, the Bridgettines of Syon Abbey eventually settling in Lisbon, Portugal. Here, in mainland Europe, these convents remained for two centuries, the nuns praying, but also involving themselves in national and international politics, reading, writing, maintaining significant financial portfolios, and pioneering forms of female education. It was not until the upheavals and anti-clerical violence of the French Revolution at the end of the eighteenth century that the majority of English women religious were forced to flee to England, once more as religious refugees.

This book is the first to take account of that recent surge in historiography, but it also re-orientates our understanding of the convents towards Catholic Europe and its centres, stressing that the convents were not isolated but part of the transnational Church, which transcended national boundaries. It situates the English Catholic experience within the wider context of the Catholic Reformation and Catholic Europe, understanding the English conventual movement as part of the historiographical effort to decentre the Catholic Reformation.

Moreover, the book acts as the entry point to the world of the nuns over their two centuries of exile existence. Rather than address the subject chronologically, I decided to order the chapters to take the reader through the experience of a nun, from entry into the convent to life in enclosure, from what the nuns’ surroundings looked like to how the whole enterprise was funded, from what nuns did all day to their wider place within the Catholic world. 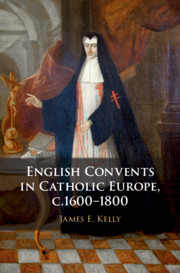 About the Author: James E. Kelly

James E. Kelly is Sweeting Fellow in the History of Catholicism at the Department of Theology and Religion, University of Durham. He was a member of the 'Who Were the Nuns?' project, and Principal Investigator of the 'Monks in Motion' project, both funded by the Arts and Humanities Research Council. He is co-editor of publications including Early M...