If you want to understand how it went from being called the “Dead Sea” to the world’s most important “Super Basin”, read the new book Gulf of Mexico Sedimentary Basin: Depositional Evolution and Petroleum Applications.  This is the first comprehensive study of the basin and its petroleum endowment in almost 40 years.

With an estimated endowment of almost 200 billion barrels oil equivalent (BBOE) and cumulative production of 60 BBOE, the GoM (including USA, Mexico, and Cuba) easily qualifies as a “Super Basin”

But it wasn’t always that way…..

In 1975, Gulf of Mexico (GoM) exploration looked like it had peaked. International capital was going to the Middle East and North Sea.  US energy shortages were becoming the new normal. President Carter called the energy challenge facing the nation “the moral equivalent of war”.  The GoM became known as the “Dead Sea” as not much was happening there from an exploration standpoint. 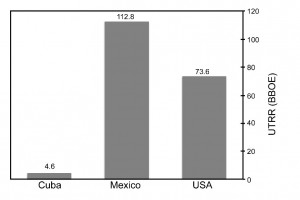 Then something magical began to happen in the GoM in the early 1980’s, as exploration poked its way in the vast uncharted territory of the deep water (water depths of >650 feet; 200 meters).  This was driven by improved technology (digital seismic acquisition and direct hydrocarbon detection, more advanced drilling technology, and new oil production capabilities) and new ideas like new deep-water reservoir concepts.  Soon GoM oil and gas discoveries climbed steeply upward, in spite of falling oil prices.

Eventually exploration activities were curtailed by 1986, commencing a phase of industry consolidation (e.g. layoffs, mergers, etc).  The GoM was thought to be too expensive and too lean in undiscovered oil.  But exploration continued, spurred on by discoveries in the supra (above) salt setting. Then another down turn by 1998 caused companies to consider exiting the basin.  Next, in 2000 the subsalt Wilcox Play was discovered, leading to a decade of growth in oil reserves.

In 2010, The Deepwater Horizon blowout occurred and a six-month drilling moratorium caused some to reconsider exploration once again. However, a new play was emerging in the eastern GoM, called Norphlet Play, where the reservoirs were old Jurassic desert sands.

In 2015, another dip in oil prices and another exodus by companies. Yet soon after Mexico opened to international exploration, with consequent huge lease sales and large discoveries (e.g. Zama).

The history lesson, shouted out by the Houston Chronicle in 2014, the Gulf just keeps reinventing itself.

What factors allow this prolific basin to keep reinventing itself, in spite of oil price fluctuations, fields nearing end of production lifespan, challenges of abyssal plain water depths, subsurface pressures over 20,000 psi, and drilling costs sometimes exceeding over a $1 million dollars a day?

As our book, GoM Sedimentary Basin: Depositional Evolution and Petroleum Applications describes, there are 10 important reasons:

2. Salt: The Louann Salt, miles thick and 100’s of miles in extent, reduces basin heat flow, acting much like a dry-fit T-shirt to wick away heat.  This is why older Jurassic and Cretaceous rocks remain viable so long, charging traps with oil even today.

3. Traps:  salt also flows, almost like wet putty, around the basin, setting up traps where oil and gas accumulates to be discovered by drilling (Figure below). 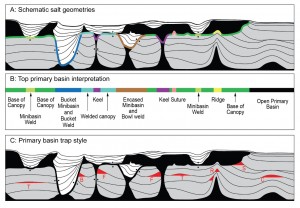 6. Creativity: the inspiring work of experts, those willing to think outside the box, and those bringing in new ideas from the outside.  Example: Deep-water reservoir models from West Texas, South Africa, France, and even Ireland have been applied in the GoM.

7. Stability: Relatively stable political systems founded on legal standards and systems that encourage investment. No wonder virtually every global energy company explores in either the northern and/or southern G0M.

8. Knowledge:  Students and researchers from universities around the world study the basin, from the surface to the deep crust, yielding important insights that often have practical applications.  The recent IODP drilling of the Chicxulub crater in the southern GoM told us so much about the last day of dinosaurs
https://www.sciencenewsforstudents.org/article/reliving-last-day-dinosaurs
Products of the impact event are also important reservoirs nearby in Mexico.

9. Cross-border communication and application: we are learning a lot about the southern Gulf from extending trends from the US into Mexico (e.g. Perdido), but also insights from Mexico help us better understand the US.

About the Author: John W. Snedden

John W. Snedden is a senior research scientist at the Institute for Geophysics, University of Texas, Austin. He directs the Gulf Basin Depositional Synthesis project, an industry research consortium investigating the depositional history of the Gulf of Mexico. Previously, he worked in the oil industry for over twenty-five years....