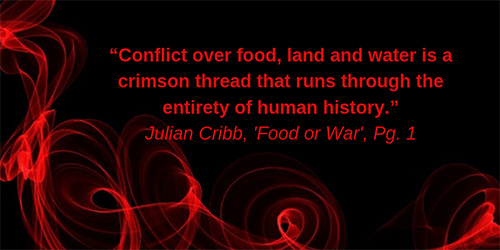 Ours is the Age of Food. Food is a central obsession in all cultures, nations, the media and society.

There is a rising danger of ‘food wars’ – conflicts over food, land and water – as the world food system begins to crack under the combined pressures of climate, water scarcity, toxicity and soil loss. In ‘Food or War’ – I show how food insecurity has driven conflict for thousands of years.

A complete rethink of the current global food system is now urgent, to avoid widespread wars and migratory crises in the mid-century, as the human population surges past 10 billion and outruns its resources.

“Ours is the Age of Food. Food is a central obsession in all cultures, nations, the media and society. Our future supply of food is filled with risk, and history tells us that lack of food leads to war. But this also presents spectacular opportunities for fresh human creativity and technological achievement.”

Everyone depends on food, every single day. We take for granted it will always be there – but the scientific evidence suggests the global food system that fed us in the 20th Century is now in big trouble, from multiple causes.
What the world most needs, before almost any other priority, is a new global food system that can feed ten billion people or more on a hot, overcrowded, resource-depleted Planet reliably, every single day – and do so for at least a century until we can bring human numbers safely back to a level the Earth can support.

The alternative is catastrophe: a growing succession of climate-driven famines, mass migration out of affected regions, collapse of governments and outright wars. Anyone who doubts this need only look at our history, which records many such events.

In the book I argue our traditional agriculture-based food system is no longer sustainable because it will lack the soil, water and stable climate necessary for it to thrive, it forces climate change and is being misused to create an unhealthy diet. Instead Food or War proposes a three-part global food system based on (i) regenerative farming (ii) urban food production using recycled water and nutrients and (iii) ocean aquaculture of fish and plants.
Such a system can not only supply an affordable secure, healthy diet for all humans in a climate-ravaged world, by re-wilding half the world’s currently farmed or grazed lands it can help to curb both the 6th Extinction and the dangerous trajectory of climate change.

Many people would say such a change is impossible – yet I have met farmers, food producers and scientists all over the world who are already hard at work designing the new system. As with the clean energy revolution, we need a clean, green food revolution to take place universally – as soon as possible. Furthermore, we can readily afford it. In Food or War I demonstrate where funds are available to pay for a rapid transition in food production systems, the repair of the wild world and a practical way to greatly increase the prospects for world peace.

Humanity is facing the greatest existential emergency in its history, with ten major threats bearing down on us. But if we get food right, we can greatly alleviate six or seven of the other megathreats.

Large-scale food production is among the greatest of human achievements. We cannot survive without it. The future of our civilization, and our species, depends on how well we do it.

Large-scale food production is among the greatest of human achievements. We cannot survive without it. The future of our civilization, and our species, depends on how well we do it. 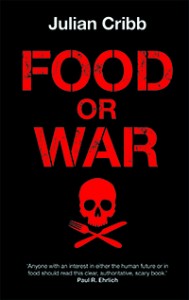