The ten states now comprising the Association of Southeast Asian Nations have collectively become a major part of the world economy, bringing together over 600 million people including a growing middle class. Yet they are highly diverse in socio-economic development, political structure and legal traditions, as outlined in chapter 1 of our book. What hope is there for real legal harmonisation or cooperation, especially for consumer protection.
The “ASEAN Economic Community” project significantly expanded intra-regional trade and investment liberalisation commitments, aiming to raise individual member states’ living standards. We argue that the liberalisation project can be enhanced by improving consumer laws and regulations.
Chapter 2 shows how and why ASEAN, through AEC Blueprints and related law reform and capacity-building initiatives, has tried to “trade up” to higher consumer law standards. It also applies other theoretical perspectives to explore the actual achievements of ASEAN, generally and for consumer protection.

Chapter 3 chronicles national enactments of consumer product safety laws and regulations, often as part of general consumer protection law statutes, as well as (often strict liability based) product liability laws, in three stages including the 2007-2015 AEC phase. It highlights regulatory gaps and demarcation problems among “line ministries” and newer consumer affairs regulators, as well as problems of access to justice for consumers seeking compensation for harm from unsafe products.

Chapter 4 focuses on consumer contracts, contrasting the widespread bans on misleading conduct with more variable treatment of unfair contract terms. A uniform approach is more unlikely but most existing laws may be sufficient if backed by effective education and enforcement.
Chapters 5 and 6 take a regional perspective in examining how ASEAN collectively can deal with pressing issues regarding consumer finance and professional health services. The challenge for consumer finance is having all states at least apply consumer protection measures against abusive lending practices, including debtor harassment. Another challenge reducing the number of people who are financially excluded. New technologies offer opportunities to achieve this, but ASEAN can strengthen knowledge and experience sharing networks amongst government agencies and other key players in this fast-evolving field.

ASEAN’s trade liberalisation agenda needs to be applied in a carefully nuanced way concerning professional health services. These services are not only a consumer product; access to health services is a basic human right. Attuning public policy to meet universal health objectives while also gaining the benefits of being subjected to competitive marketplace disciplines is tricky, especially when national budgets are highly constrained. The challenges may be exacerbated if members implement ASEAN’s commitment to mutual recognition of professional qualifications, so health professionals gravitate from poorer countries to higher income states. 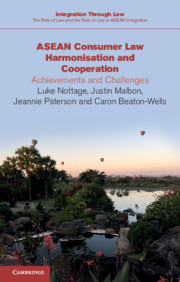 Chapter 7 explores the development of competition policy and associated laws and enforcement institutions in ASEAN, at both the national and regional levels. It explains the interface between competition and consumer protection and examines the implications for substantive and institutional design and operation that have been increasingly recognised around the world.  Highlighting the general lack of coordination between competition and consumer protection endeavours in ASEAN to date, it poses some explanations for this and argues that a more coordinated and outcome-focused approach would assist in achieving the economic and social objectives of the AEC.
The book concludes by considering whether transgovernmentalism or “regional shared value” can promote more coordinated and effective consumer law, galvanising the cooperative and consensus-building approach traditionally preferred by ASEAN.

About the Author: Luke Nottage

Luke Nottage is Associate Director of the Centre for Asian and Pacific Law at the University of Sydney. His previous books include works on ASEAN product safety law, and consumer law in Australia and New Zealand. Luke has consulted for law firms and international organisations, including the ASEAN Secretariat....

About the Author: Jeannie Paterson

Jeannie Paterson specialises in contracts, consumer protection and consumer credit law, as well as the role of technological change in these contexts. She writes and consults widely in these areas....

About the Author: Justin Malbon

Justin Malbon is an Adjunct Professor at Griffith University, Australia. He is a former Professor at the Monash University Law School. He has published across a wide range of topics, including consumer law, international trade, intellectual property and the legal rights of Indigenous peoples....

About the Author: Caron Beaton-Wells

Caron Beaton-Wells is Co-Director of the Global Competition and Consumer Law Program and Director of the Competition Law & Economics Network at the University of Melbourne. She is regarded as Australia's leading academic in this field, is extensively published and has been invited to speak at numerous international conferences....