Searching for a Biblical Scribe

Written by: Christopher B. Hays

The author looks over the ruins of Ramat Rahel near Jerusalem. He argues it was the site of an ancient Assyrian imperial citadel whose destruction was celebrated in Isaiah 24-27

In recent decades, my field has become increasingly fascinated with ancient authors—scholars of Hebrew Bible have asked who the scribes who wrote the Bible were, and how they worked. Whatever else we do as scholars, it seems like we come back to those questions again and again.

These questions are fundamentally historical ones, and so they depend on the proper handling of sources. But ancient Near Eastern history is all the more difficult because the sources are often scarce and contested. We have to deal with fragments and hints from diverse subfields. For all their challenges, these empirical data serve as checks on the intuitions and improper analogies of past generations of scholarship.

My new book is the result of more than a decade of wrestling with a particular piece of the book of Isaiah that has long been a puzzle for interpreters: chapters 24-27. Many have seen it as a collection of broken fragments that do not cohere well. Others have called it one of the very latest texts in the Hebrew Bible, one perhaps written by sectarians like those at Qumran. Since I have been preparing to write a major commentary on Isaiah, I felt like I first had to understand this piece of it better, because it plays such an important role in theories of the book’s formation.

I analyzed its Hebrew and discovered that it lacked the late linguistic features that all postexilic compositions have (including Isa 40-66). I considered its language of the dead rising and of widespread destruction, and realized that they were not indicators of a Hellenistic text. In the end, I decided a new explanation was needed.

It had been suggested that Isa 27:5’s exhortation—“Let it make peace with me!”—was an overture by King Josiah of Judah to the northern territory that had once been part of Israel. The kingdom of David and Solomon had split, in a kind of civil war, into a northern kingdom (Israel) and a southern one (Judah). Eventually the northern kingdom was overrun by the Neo-Assyrian Empire, and colonized. Judah survived, barely, but paid onerous taxes to the empire. When Assyria itself eventually collapsed a century later, it left a brief window of independence and opportunity for small nations like Judah.

Upon further analysis, it turned out that the bulk of Isa 24-27 could be understood as a kind of festival scroll for that moment in the 7th cent. BCE, during the reign of Josiah, when Assyria crumbled. For the first time in centuries, everything looked possible for the Davidic dynasty—even the reclamation of the northern lands—if only Josiah could make the right sales pitch.

My book concludes by imagining the story of a scribe who is surprised to be asked to compile this ambitious message on Josiah’s behalf. It suggests that he searched the extant traditions of his times for images to express the king’s ambitions, and theologies both ancient and contemporary to make sense of the purposes of God.

The fact that Josiah’s dream was never fulfilled in the way he hoped meant that the text itself, like the fallen Assyrian citadel, was eventually buried and forgotten—under other literary layers in this case, rather than dirt and stone. But I view its excavation as a kind of archeological project, and I’m glad to present this story again for readers to consider, like a pot pieced back together from its sherds.

An article that summarizes the book can be found here. 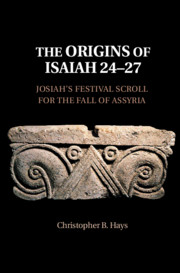 The Origins of Isaiah 24–27 by Christopher B. Hays

About the Author: Christopher B. Hays

Christopher B. Hays holds the D. Wilson Moore Chair of Ancient Near Eastern Studies at Fuller Theological Seminary, California. In 2013, he won the Manfred Lautenschlaeger Award for Theological Promise for Death in the Iron Age II and in First Isaiah (2011). He is also the author of Hidden Riches: A Sourcebook for the Comparative Study of the Hebre...