In October 2015 Ireland’s National Theatre announced its commemorative ‘Waking the Nation’ programme. The intention was to ‘interrogate rather than celebrate’ the 1916 Easter Rising, yet women were largely obscured from the programme: 90% of the plays were male authored. The marginalization of women theatre-makers and female narratives prompted an incendiary response in the form of the #WakingTheFeminists campaign which has compelled arts organisations in Ireland to address gender equality at the level of policy and governance, and demands that we ‘interrogate what stories are told, who gets to tell those stories [1].’  This demand is central to my book Women and Embodied Mythmaking in Irish Theatre in which I address a rich tradition of women’s mythmaking in Ireland: underexamined, radical and inspiring performances which deserve further scholarly consideration as well as theatrical re-engagement. These performances span the twentieth and twenty-first centuries, from the tableaux vivants performed by the Inghinidhe na hÉireann (Daughters of Ireland) in 1901 to contemporary work translated, adapted and performed by Olwen Fouéré.

Irish myth was foundational to the creation of a national theatre and formed the cultural bedrock for an independent nation. Myth’s perpetuation of idealised tropes of femininity silenced the realities of women’s lives and bodies, most notably through the figure of Mother Ireland, yet women theatre makers have persistently and imaginatively engaged with and rewritten these feminine icons. Myth was a source for women’s activism and theatrical work, and their mythmaking did not always align with, and frequently opposed, nationalist motivations. The male-dominated literary canon and mythmaking of Irish theatre and masculinist scholarship has focused attention on nationalist discourse thereby replicating the marginalisation of women’s voices and experiences from the public sphere. In order to rewrite history we need to reframe it and I adopt feminist philosopher Alison Stone’s proposal of a genealogy which advocates a coalitional politics and acknowledges women’s differing experiences, rather than asserting essentialist identities: ‘women are connected together in complex and variable ways, through historical chains of partially and multiply overlapping interpretations of femininity [2].’  The mythmaking in the plays and performances discussed in my book comprise ‘chains of reinterpretation that bring them into complex filiations with one another’ [3].

This framework has enabled me to weave an alternative history of modern Irish theatre shaped by women’s contributions. Women’s progress towards equality in Ireland has at times appeared to stall; most notably the impact of the conservatism of the decades after Independence (1922). I adopt a non-linear approach to counter the linear canon of Irish theatre which has served to reinforce the apparent silence of these stalled periods and severed the connections which form a tradition of women’s theatre. The genealogy as a coalition is a crucial intervention as it addresses the question of how the individual might make a meaningful intervention in the face of myth’s power, as well as resilient power structures including the canon. 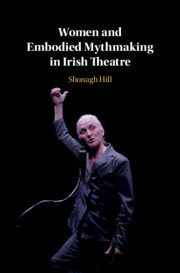 Women and Embodied Mythmaking in Irish Theatre by Shonagh Hill

About the Author: Shonagh Hill

Shonagh Hill teaches at University College Dublin. She was awarded an Irish Research Council Postdoctoral Fellowship 2016–17 (University College Dublin) to develop her monograph Women and Embodied Mythmaking in Irish Theatre. Hill has published articles on women and Irish theatre in a range of leading journals and internationally reviewed books. ...

Why Write a Cambridge Companion to...