Who runs the joint? Gangs and social order in prisons

To most people, life in prison is a mystery. In a new study, we examine many aspects of prison life, with a special focus on the role of gangs.

We interviewed 802 inmates in prison in Texas, half of whom were gang members. With 150,000 inmates, Texas is the largest state prison system in the country. With around 80 gangs and 12,000 gang affiliates, the Texas prison system has a lot of gang activity.

Gangs are thought to be highly secretive, prohibiting the sharing of information with prison authorities, rival gangs, and others. Could we trust what inmates told us? Would administrative records reveal a different picture of gang life? We compared the administrative records of inmates to what we were told during in-depth interviews. There was considerable overlap between the two sources of data. This is a unique feature of the book, as access to official prison records and permission to conduct in-person interviews with inmates are rare.

We examine traditional explanations of inmate behavior such as importation, deprivation, exportation, and organizational control. We focus specifically on the competition for control in prison. The stakes are high in this battle, with contraband, such as drugs and cellphones, and personal safety as key elements of the transactions among inmates and between inmates and staff. Gangs play a core role in the social order of prisons, but do not maintain the iron-fisted influence they once had.

There are many similarities between gang members in prison and those on the street. Both engage in high levels of serious criminality, including assault, robbery, and even murder. Not unexpectedly, gang members face increased levels of surveillance and punishment by authorities. The corollary to offending is victimization. As is the case on the street, gang members experience very high rates of victimization. In many cases, being a victim of a violent crime is a factor in future offending, whether as revenge or a pre-emptive strike against rivals.

The role of prison in promoting gang membership is not well understood. Just as many inmates initiated their gang affiliation in prison as imported it from the street, although most inmates (80%) do not affiliate with gangs. Most strikingly, inmates regularly leave gangs in prison. Most of them leave for reasons related to family, a concern about their future, or disillusionment with gang life. There were few repercussions for members who chose to leave their gang.

Our most important findings concern the organizational structure of prison gangs. The long-standing view of this issue is that prison gangs are highly organized and exercise strict control over their members, other inmates, and correctional staff. We found some evidence of this, but also a lot of variation. Individuals reported that prison gangs had lost some of their control through the years, especially over non-gang members. If anything, there are distinct codes, one for the gang members and another for non-gang inmates.

Gang members are commonly viewed as an issue to manage, not rehabilitate. However, we find considerable promise for a number of interventions with prison gangs. Programming could help those who have tired of gang life or want to reentry society without the burdens of gang affiliation transition away from gangs.

The prison world remains largely unknown to the public and to many policymakers. Life in a prison gang is even murkier. Our study sheds light on this world in Texas. 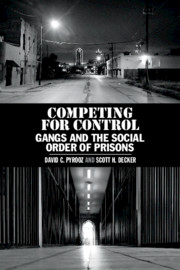 About the Author: Scott H. Decker

Scott H. Decker is Foundation Professor in the School of Criminology at Arizona State University. His main research interests are in gangs, violence, and active offenders. He is the author of Life in the Gang: Family, Friends and Violence (1996) and Policing Immigrants: Local Law Enforcement on the Front Lines (2016)....

About the Author: David C. Pyrooz

David C. Pyrooz is Associate Professor of Sociology and Faculty Associate of the Institute of Behavioral Science at the University of Colorado Boulder. His research interests are in the area of gangs and criminal networks, developmental and life-course criminology, and incarceration and re-entry....