Why Does Counting Civilian Casualties Matter?

In May, the U.S. Department of Defense released a report—its most thorough yet—purporting to account for all the civilian casualties of U.S. military activities in 2018: 120 deaths and 65 injuries in Iraq and Syria, Afghanistan, and Somalia. The report also acknowledged the deaths of 793 civilians in Iraq and Syria as a result of U.S. and coalition military activities there in 2017. These figures almost certainly underrepresent the actual sum of civilian deaths and injuries caused by the U.S. and coalition partners in 2017 and 2018, as other monitoring organizations report well over double those numbers.

This failure to gather and share accurate data regarding the harms we inflict in our global military operations represents a significant evasion of responsibility on the part of the military and its civilian leadership. To neglect to acknowledge the harms we cause—and by extension, the persons who are harmed by our actions—is to suggest that they are unimportant or even nonexistent. Moreover, this failure at the level of institutional leadership both enables and is reflected in the American public’s abdication of our shared duty to hold the organizations that represent us accountable. Documents like the DoD report might serve to spark public conversation about what is undoubtedly one of the most pressing moral questions of our time: What are Americans’ responsibilities toward the innocent persons we harm in military operations around the world? Sadly, after nearly 18 years of war—and no end in sight—reports like these rarely make much news these days, and this important question goes not only unanswered but largely unasked.

The general assumption of both the U.S. government and its population at large appears to be that the question is sufficiently addressed by the legal conclusion that these persons’ deaths and injuries constitute lawful “collateral damage”—what the report refers to as “a tragic and unavoidable part of war.” In my recent book Expanding Responsibility for the Just War: A Feminist Critique, I offer a twofold response to this assumption.

First, responsibility is not exhausted by legal culpability. Legal instruments like the Geneva Conventions and the Rome Statute stop at prohibiting direct or intentional attacks on civilians. They do not address the broader question of what it means to be responsible for causing harm, even unintentionally, and to make oneself responsible to a person one has harmed.

Second, not all collateral damage is “unavoidable.” Indeed, one significant way of accepting responsibility is to do the investigative work necessary to determine how harmful consequences occurred and to change future practices accordingly. The consequences of neglecting to do so can be seen in the continued high numbers of civilian casualties in America’s wars. Thus, our failure to account—literally and figuratively—for the harms we have inflicted on innocent persons is a failure to recognize not only those we have harmed, but those we will similarly harm in the future, as human persons worthy of response. 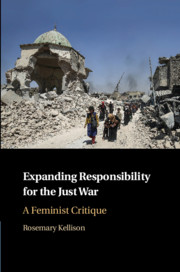 Expanding Responsibility for the Just War by Rosemary Kellison

About the Author: Rosemary Kellison

Rosemary Kellison is Associate Professor of Philosophy and Religion at the University of West Georgia. A scholar of comparative religious ethics, she has published in the Journal of Religious Ethics, Soundings, and the Journal of Feminist Studies in Religion....