In the mid 17th century, Varenius, the founder of modern geography, wrote that of all the natural phenomena, none had perplexed scientists more than the tides: the connection to the Moon was as empirically evident as it was causally elusive. Not much more could be said than that some hidden form of attraction had to be at work.

Some decades later, this notion of a hidden form of attraction was placed in a new light by Newton’s universal theory of gravity. For the understanding of tides, this was a fundamental step forward in two ways. First, the theory at once put the Moon and Sun on an analogous footing as tide-generating bodies; second, the mathematical formulation of the force of gravity shifted the focus from the unanswerable why to the more productive how.

With that, the force behind the tides was well explained. However, what we are ultimately interested in is the response of the oceans and seas to this force. This response is complex because the tides propagate as waves, as was elucidated by Laplace in the late 18th century. The complexity of the oceans, with their irregular shapes due to the presence of continents, precludes a purely mathematical treatment of the problem.

From a practical point of view, a correct prediction of high and low tides in harbors and adjacent coastal seas was the most pressing issue. Knowing the fundamental frequencies involved the tides from astronomy and hydrodynamics, the art of prediction reached a high level of reliability in the 19th century, again with some of the greatest physicists involved (notably Lord Kelvin).

By the early 20th century, the main gaps in understanding concerned the pattern of tidal propagation in the open ocean, where measurements are scarce, and the dissipation of tides. Meanwhile, another kind of tide had been discovered: the internal tides that propagate in the interior of the ocean.

The pieces finally came together with the advancement of satellite altimetry, combined with numerical modelling and increasing computer power. For the first time, an accurate picture arose of the propagation of tides in the open ocean. Moreover, it could now be estimated where the losses of energy occur. Deep ocean ridges turned out to be key areas, where energy leaks into internal tides, which in turn induce abyssal mixing. Remarkably, this small-scale mixing was found to play an essential role in maintaining the large-scale meridional overturning circulation in the ocean – revealing yet another dimension of tides. Over half a century, key contributions to these ideas came from Walter Munk, who died this year at the age of 101. Numerical models also opened up a way to study tides in the geological past, the subject of paleotides.

Writing a textbook on tides feels like a journey through time. Some parts of the book could have been written by ancient Greek astronomers, others by 17th century students of Newton’s theory, still others by a physical oceanographer in the 19th century. But the advances of recent decades enable us to bring the elements together in a newly unified way. 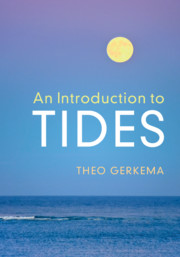 An Introduction to Tides by Theo Gerkema

About the Author: Theo Gerkema

Theo Gerkema is a senior researcher in the Department of Estuarine and Delta Systems at the Royal Netherlands Institute for Sea Research (NIOZ). He graduated as a theoretical physicist from the Rijksuniversiteit Groningen and studied the generation of internal solitons for his Ph.D. at NIOZ. The early part of his career was devoted to studying inte...