Standing Up to Investor Misconduct

In 2015, a perfect storm came together.  Big Tobacco was waging a war on multiple fronts against states that had enacted, or were considering the enactment of, stringent tobacco control regulations.  Two of the battlefronts of that war were claims brought under investment treaties against Australian and Uruguay.  Against that background, the Obama administration was pushing for the conclusion of two new investment treaties of unprecedented scope, namely the Trans-Atlantic Trade and Investment Partnership (’TTIP’) and the Trans-Pacific Partnership.  Public sentiment turned against these investment treaties.  Sensing the political opportunity, then presidential candidate Donald Trump announced that he would withdraw the United States from them, an announcement that he subsequently acted on.

“…there is one general tenor: this is an area of international law that is structurally designed to (unfairly) favour investors’ interests over states’ interests…”

Reading through the media coverage that international investment law received in 2015, there is one general tenor: this is an area of international law that is structurally designed to (unfairly) favour investors’ interests over states’ interests.  And this mattered for the simple reason that it made it easier for investors to successfully claim compensation from states, compensation payments that would be funded from citizens’ taxes.  The alleged design flaws were numerous, but one which was omnipresent was the asymmetry of obligations; in other words, investors could sue states for their misconduct, but states did not enjoy the same privilege. 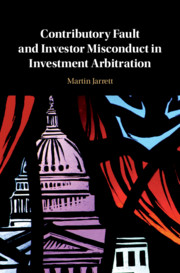 Putting all this together, it seemed that investors were not accountable for their misconduct under international investment law.  The truth, of course, is more nuanced.  Revealing those nuances is the primary goal of my forthcoming book, Contributory Fault and Investor Misconduct in International Investment Law.  Acknowledging that investment treaties do not currently impose obligations on investors, it explores the other legal tools in international investment law through which investors can be held accountable, such as the doctrine on contributory fault, ‘in accordance with host state law’ clauses, the defence of illegality, and counterclaims against investors.  The state of the jurisprudence on these tools, however, means that they are theoretical possibilities for holding investors to account.  In seeking to fill this jurisprudential void, the book puts forward the doctrine that is needed to bring these tools to life.

Contributory Fault and Investor Misconduct in Investment Arbitration will be available from August 2019.

About the Author: Martin Andrew Jarrett