Seeing What Isn’t There: False Positives in the History of Astronomy

In this post Todd Timberlake author of Finding our Place in the Solar System, 2019 examines two different 'false positives' in the history of astronomy, discussing why they occurred, and how these false observations were eventually discarded.

We often hear about “false positives” in the context of medical diagnosis, when a test indicates that a patient has a disease or infection that is, in fact, not really present.  However, false positives can crop up in any area of science and astronomy is no exception.  In this post we will briefly examine two different false positives in the history of astronomy, discuss why they occurred, and see how these false observations were eventually discarded. 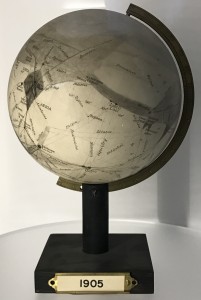 Martian globe prepared by Percival Lowell, on display at the Lowell Observatory in Flagstaff, Arizona

Our first false positive concerns canals on Mars.  In 1893 the Italian astronomer Giovanni Schiaparelli published observations of the planet Mars that noted several linear features on the face of the planet.  Schiaparelli would later suggest that these lines on Mars were canals, constructed by a Martian civilization to distribute water from the melting polar ice caps to the dry equatorial region of the planet.  This idea was taken up by the American business-man-turned-astronomer Percival Lowell.  Lowell built an observatory in the town of Flagstaff, in what was then the Arizona Territory, in order to better observe the canals on Mars during Martian oppositions (when Mars is opposite the Sun in our sky and closer to Earth than it usually is).  Lowell found many canals on Mars and constructed a series of globes showing the network of canals spread across the red planet.  He spread the word of his discovery through books such as Mars as the Abode of Life (1908).

Some astronomers confirmed Lowell’s findings, but others could not see the canals that Lowell saw.  Lowell argued that only experienced observers with the best equipment could see the canals, but most of his contemporaries were unconvinced.  Many condemned Lowell’s wildly speculative views and accused him of simply seeing what he wanted to see rather than what was actually there.  A few moved beyond verbal criticism and tried to determine why Lowell might be seeing non-existent canals, or to decisively show that the canals did not exist.  Edward Maunder conducted an experiment in which school boys were shown pictures of disconnected spots held far away.  The boys frequently perceived lines connecting the spots, even though no such lines were present in the pictures.  Maunder concluded that Lowell’s canals were an illusory artifact constructed by the human visual system from an indistinct image.  Eugene Antoniadi took a different approach, observing Mars during opposition using a telescope with a greater aperture, and thus better resolving power, than Lowell’s.  He found that the superior telescope resolved Lowell’s canals into non-linear, natural-looking variations on the Martian surface.   Of course, we now know there aren’t any canals on Mars, nor any civilization that could have built them. 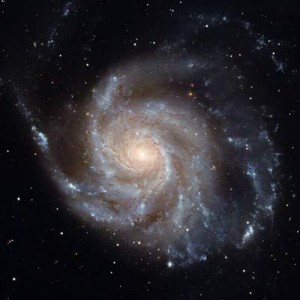 Our next false positive has to do with the rotations of spiral nebulae.  By 1915 astronomers knew that some nebulae (fuzzy deep sky objects that could not be resolved into individual stars) were truly nebulous clouds of gas and dust, while others were distant star clusters.  However, controversy swirled over the so-called “spiral nebulae.”  These were a class of nebulae, first identified by astronomers at Birr Castle in Ireland, that displayed a spiral or pinwheel structure. None of the spiral nebulae had been resolved by 1915 and astronomers were split into opposing camps concerning the nature of these objects.  Some thought they were truly nebulous clouds of gas and dust that were slowly forming into solar systems with planets orbiting a central star, thus confirming a theory of planet formation originally suggested by the French mathematician Pierre-Simon Laplace and later modified by American astronomer Forest Moulton and geologist Thomas Chamberlin.  Others believed the spiral nebulae to be extremely distant and enormous star clusters, separate from our own Milky Way system and perhaps comparable to it in size.

In 1916 the astronomer Adrian van Maanen at the Mount Wilson observatory in California published a paper that seemed to rule out the idea that the spiral nebulae were distant galaxies.  Van Maanen compared photographs of the spiral nebula Messier 101 taken over a period of about 15 years.  He examined these photograph in a stereocomparator, a device that could rapidly switch between a view of one photograph and a view of the other.  Using the stereocomparator, van Maanen found evidence that M 101 had a minute but noticeable rotation of about 15 arcseconds per year (or about one degree every 240 years).  A few other astronomers also detected internal motions in spiral nebulae, but with results that were not always consistent with van Maanen’s.  This barely discernable rotation caused major problems for the theory that spirals were vast stellar systems because if M 101 was as far away as the proponents of that theory claimed, then van Maanen’s rotation meant that the outer parts of the nebula must be moving faster than the speed of light.  After Einstein’s introduction of special relativity in 1905 such faster-than-light motions were not to be believed, so van Maanen and others concluded that the spiral nebulae were not distant star systems but were instead truly nebulous objects that lay relatively nearby within our Milky Way system.

Some astronomers doubted van Maanen’s results and eventually the detection of Cepheid variables in spiral nebulae by Edwin Hubble, combined with Henrietta Leavitt’s famous period-luminosity relation for Cepheids, showed that the spiral nebulae lay at vast distances that placed them well beyond the boundaries of the Milky Way.  Hubble’s results clearly conflicted with van Maanen’s rotations and most astronomers were convinced that Hubble had the stronger case and van Maanen’s rotations should be ignored.  Hubble, though, was not satisfied and he set out to show that the rotations were not real.  He enlisted the help of two colleagues to remeasure the photographs used by van Maanen, as well as some newer photographs.  Their measurements did indicate some shifts in the spirals but the shifts were small enough to be attributed to measurement errors.  We now know that M 101 is a distant galaxy (known as the Pinwheel Galaxy).  It lies about 21 million light years away and has a diameter of about 170,000 light-years, making it larger than our Milky Way galaxy.  With these dimensions van Maanen’s value for the rate of rotation would mean that the outer edge of the nebula would rotate at a speed six times that of light.  That, of course, is impossible.  Van Maanen’s rotations aren’t real.  In fact, spiral nebulae do rotate but in the opposite sense from that found by van Maanen and at MUCH lower rates, something like 1 degree in 100,000 years.

What can we learn from these false positives?  First, that scientists should be skeptical of observations made at the limit of what is possible.  That’s not to say that they should ignore work at the cutting edge of technology, just that they should not accept it uncritically.  Second, scientists must always be wary of their preconceptions.  Lowell believed there was life on Mars and expected to see evidence for it.  He was inclined to believe in the reality of the linear features he perceived on the Martian surface because they fit with his preconceptions.  Likewise, the pinwheel-like structure of the spiral nebulae led van Maanen and others to EXPECT rotations in the spirals.  Such preconceptions are impossible to avoid, so we must be aware of them and cast a critical eye on observations that support our preconceived notions.

Finally, these cases show us that the scientific community can overcome the problem of false positives in several ways.  A re-examination of the data by other parties may cast doubt on the validity of the original observations (as with Maunder’s analysis of Lowell’s observations or Hubble’s re-examination of van Maanen’s rotations) or better technology may come to the rescue (as with Antoniadi’s improved observations of Mars).  Even theoretical arguments can be used to discard bad observations, as when astronomers rejected van Maanen’s rotations after Hubble’s Cepheid variables showed that spiral nebulae lay at enormous distances.  False positives are just part of science, but so too is the vigilance of the scientific community to critically appraise questionable observations.

To learn more about these and other false positives in astronomy I recommend ‘Science and Objectivity’ by Norriss Hetherington.