Writing the Economy of Nature

The concepts of ecology and political economy did not exist in the seventeenth century. Political economy would not formally develop until the eighteenth century when writers like Adam Smith, Thomas Malthus, and David Ricardo came to theorize the set of ideas that we now recognize as belonging to “the economy.” Likewise, ecology wasn’t identified as a discrete discipline until the late nineteenth century when the German naturalist Ernst Haeckel proposed a new science surrounding the emergent ideas of Charles Darwin. While absent in the seventeenth century, both ecology and political economy find their conceptual roots, as well as their linguistic ones, in the early modern idea of “oeconomy”—meaning, most directly, household management. The early modern spelling “oeconomy” emphasizes the word’s Greek etymology, oikos + nomos (household law). When writers like Adam Smith used the phrase “political oeconomy” they did so metaphorically with the assumption that the collective financial activities of nation-state mirror, on a much broader scale, those of the individual household.

The connection between early modern oeconomy and ecology finds its most direct expression in the concept of “the oeconomy of nature,” which was developed in the middle decades of the seventeenth century by the natural philosopher Sir Kenelm Digby in attempt to reconcile Aristotelian physics with the new mechanical philosophy and to fit both within a Christian providential framework. The concept was subsequently adopted by a number of influential natural philosophers and physicians including Walter Charleton, Thomas Burnet, and Robert Boyle before finding its most influential embodiment one hundred years later in Linnaeus’s book Oeconomia Naturae (1749), translated into English by Benjamin Stillingfleet under the title The Oeconomy of Nature. Influenced by Linnaeus, Charles Darwin used the economy of nature as a rubric for expressing nature’s systemic interconnection.

In my recently published book, The Concept of Nature in Early Modern English Literature, I trace the oeconomy of nature’s development in seventeenth-century literature and natural philosophy, arguing for its importance in the intellectual and literary history of ecology. I contend that oeconomy not only supplied an early model for thinking about the natural world as a system, but that it also had a profound influence on literary representations of nature in the early modern period. Poets like Ben Jonson, Andrew Marvell, and Margaret Cavendish employed the metaphorics of household management to depict nature as orderly and efficient. My book was in part inspired by Donald Worster’s masterful history of ecology, Nature’s Economy: A History of Ecological Ideas (first published in 1977), which is impressive in its historical and discursive scope, but largely neglects the oeconomy of nature’s early development. Rooted in ecocritical theory and intellectual history, The Concept of Nature in Early Modern English Literature offers an important new historical framework for thinking about ecology in the early modern period. 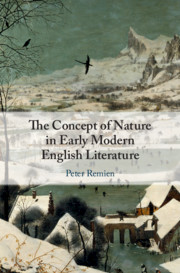 About the Author: Peter Remien

Peter Remien is an Associate Professor of English at Lewis-Clark State College, Idaho. His teaching and scholarship focuses on early modern English literature, with particular attention to economic and environmental approaches. His articles have appeared in a number of journals including Modern Philology, ISLE: Interdisciplinary Studies in Literatu...