Immigration and Refugee Law in Russia

We all remember the fragile, lifeless little body of Alan Kurdi, a 3-year-old Syrian boy, washed up on a Turkish beach in September 2015. I had just given birth to my first child, Stefan, and I only could imagine how inconsolable Alan’s family must have been at that time. Whilst many Syrian refugees were trying to make it over the Aegean Sea to Europe that tragic summer, it is not surprising that some did not want to trust their lives to makeshift boats and human smugglers. They chose a different route to escape Syria altogether and arrived in Russia.

One day, a case file landed on a desk of a lawyer who I was shadowing…

Russia, although an important political player in the Middle East, and open supporter of President Assad’s regime, was not the most welcoming place to Syrian refugees. Of all that applied for a refugee status, only two were granted it. Around 1,500 Syrians (at different points in time) were given temporary asylum, a subsidiary form of protection valid for one year. Given the UNHCR’s estimates of around 10,000 Syrian people ‘of concern’ in Russia, this recognition rate ironically represented only a drop in the ocean.

But beyond these numbers, there is a different story: a story of dedicated human rights and immigration lawyers in Moscow, St Petersburg and other parts of Russia who tirelessly represented Syrian (and others) asylum seekers, trying to grant them access to the refugee status determination procedure and represented them in courts. I was in Russia doing fieldwork in Spring 2014 in one Moscow’s NGO –Civic Assistance Committee  – directed by a truly charismatic chairwoman, Svetlana Alekseevna Gannushkina: a nine times nominee to the Nobel Peace Prize.

One day, a case file landed on a desk of a lawyer who I was shadowing. The Federal Migration Service charged two Syrian and one Palestinian men (a former Syrian resident) for working without a work permit. The low-level court processed these administrative immigration offences according to the domestic legislation and sentenced the men to a fine and deportation. This was a truly myopic decision – the men were to be returned to Syria, to war, to the very place they were trying to escape from. The lawyer took on the men’s case and appealed to a higher court. She did not dispute the facts of the case: the men were indeed working without papers. However, the lawyer wanted to shift the judge’s focus from the immigration offences to humanitarian arguments and the very vulnerable status of these men as de facto Syrian refugees. The men had by now applied for a refugee status in Russia. The lawyer also pointed to the disproportionality of the lower-court judgment: the men risked being deported to a place of war, facing death, potential torture and indiscriminate violence for an offence that was not even a crime, merely couple of months of undocumented work in Russia. The higher court rejected the appeal demonstrating the inflexible, black letter interpretation of the Russian law – the men were ‘migrant workers’ not ‘refugees’ and should therefore bear the full consequences of the law. 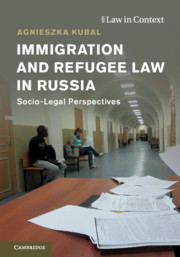 Immigration and Refugee Law in Russia by Agnieszka Kubal

We could not leave this case, nor the men, like that. Together with the lawyer, we ventured the first application to the European Court of Human Rights on behalf of Syrian refugees from Russia. We applied for Rule 39 of the Rules of the Court – interim measures – to put an injunction on the decision of the Russian domestic courts, as the men’s deportation would mean imminent risk of irreparable harm. The Strasbourg Court granted Rule 39 within twenty-four hours and gave priority to this case, which became known as LM and Others v Russia. The judgment was delivered on 15 October 2015. This was an unprecedented judgment – the Court ruled that a deportation or otherwise a removal of these men to Syria (or elsewhere, e.g. Turkey) would result in a violation of Article 2 (right to life) and Article 3 (prohibition of inhuman and degrading treatment) of the European Convention of Human Rights. The Court ruled that the men’s detention in Russia was unlawful, and ordered their immediate release (with compensation awarded). Since the judgment, the Syrian men were indeed released, and subsequently obtained temporary asylum in Russia.

What is equally important was that LM and Others v Russia became a judgment binding other European countries and barring them from removing Syrian refugees; it has since been translated to five languages (German, Croatian, Czech, Turkish and Russian). While the judgment arrived too late to save the life of little Alan, it has given other human rights lawyers in Europe a tool to fight for the rights of others. This was a true victory for the Russian human rights lawyers, whose everyday work, legal struggles, defeats and triumphs I portray in my book: Immigration and Refugee Law in Russia. Socio-Legal Perspectives.

About the Author: Dr Agnieszka Kubal

Agnieszka Kubal is a Lecturer at the Department of Social Sciences, University College London. She is a sociologist and migration studies scholar. She was educated in Krakow, Exeter and Oxford, with a postdoctoral spell at Harvard. Her D.Phil. looked at Polish migrants' experiences of the British legal environment post-2004 EU enlargement and was l...