A lesson from the Renaissance: we read the book before the text

A lesson from the Renaissance: we read the book before the text

Do me a favour: stop reading. Turn away from the screen, lean over, stretch across or get up and take a book (any book) in your hands. Don’t open it. In fact, close your eyes for a moment and feel it: what do you read? Because you are reading: the shape, the size, its feel, its smell — these all say something to you about that volume. Now open your eyes and the book: don’t read the words but instead read the page. Scrutinize the paper quality, the layout, the font: all of these send messages of what to expect from what you are about to read. That is to say, you only reach the text through the gateway of the page.

This is true of any book but some do it more self-consciously than others. The Renaissance Reform of the Book and Britain is about a moment in the Western tradition when the page’s ability to speak — its eloquence — was highly prized. Early in the monograph, the basic concept is introduced by comparison with the performance of a speech:

the words of an oration are mute until brought to life by the speaker; what the page does is akin to the combined effect of voice-pitch, speed and tone of delivery, gestures and pauses — the page is nothing less than the text’s body language.

The place and time when this realisation was very acute was Florence, c. 1400, half a century before the invention of print by movable type. There, a group of literati keen to reform culture — people we now call the Renaissance humanists — wanted to design manuscripts that would act as a visual manifesto for their intellectual agenda. Some among them, including a young Poggio Bracciolini (who recently and for different reasons was the hero of Stephen Greenblatt’s The Swerve), set about creating a new script and a new presentation of the page. Their ‘new’ might, for us, lack novelty: the long lines of text set within wide empty borders is an aesthetic with which we are very familiar. That is testimony to its success, with later generations of printers having taken it as their model.

At the same time, the humanists’ ‘new’ was, even in the Renaissance, old: they invented by looking back to a previous reform of script, from six hundred years earlier. We know that earlier bookhand as ‘caroline minuscule’, because of its association with the first Holy Roman Emperor, Charlemagne. Supported by the imperial court and by leading monasteries, caroline minuscule conquered Europe in the ninth and tenth centuries. Its success, though, was not as quick as that of the reforms promoted by the fifteenth-century humanists, despite the fact that this group of bureaucrats and merchants could not boast of similarly prestigious backing.

The Renaissance Reform reconstructs that success and asks how it could come to be by focussing on one geographical region, the British Isles. It is often assumed that the Renaissance came sluggishly to England’s shores but, in terms of the new aesthetic of the book, there was a tradition of interest from within a third of a century of the script’s invention. That tradition was a cosmopolitan creation, produced not just by English-born and Italian copyists but also by Dutch scribes active in England. This engagement tells us something fundamental about how those reforms were perceived. Their inventors, like Poggio, might have seen them as a local reaction against the international style they disparaged as ‘gothic’, but the aesthetic struck the goths themselves with a sense of recognition. Those who had looked at old books, whatever their country in western Europe, would have appreciated the humanists’ choices because they were already aware of manuscripts in caroline minuscule. We are de-sensitised to the letter-forms and page-design because we see them everywhere; by contrast, in the fifteenth century, the reforms provided the shock of the familiar.

Some Italians celebrated ‘their’ revival of the long-lost as a reflection of their privileged position as the inheritors of the Roman empire. Some also saw it as their task to export their revival to the barbarians beyond the Alps. There are several elements in which Renaissance practices did, indeed, spread slowly out from centres in Italy. That, however, is not the whole story. The reform of the book succeeded not because it was belatedly sent abroad but because of the cosmopolitan cast-list of early adopters, in Italy as well as outside it. The Renaissance Reform concentrates on those at work in Rome who came from England and, in one case, Scotland, but they were part of a larger pattern. The implication is that the humanist invention of the eloquent page won the day not because it was particularly Italian but because it spoke to Europe’s shared heritage. The Renaissance, even in its heartland, was a cosmopolitan enterprise. 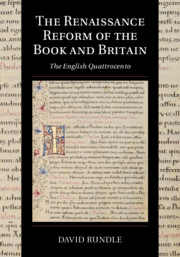 The Renaissance Reform of the Book and Britain by David Rundle

About the Author: David Rundle

David Rundle is Lecturer in Latin and Manuscript Studies at the Centre for Medieval and Early Modern Studies at the University of Kent. His previous publications include, as co-author with Ralph Hanna, A Descriptive Catalogue of the Western Manuscripts, up to c. 1600, in Christ Church, Oxford (2017)....