Is there a moral test for legal validity?

Must law pass a moral test in order to be valid? Most legal theorists today answer this question in the negative. The dominant tradition in contemporary legal philosophy, known as legal positivism, maintains that the only necessary factor in establishing a law’s validity is its social sources – for example, whether the law was passed by a recognised legal authority, such as a legislature, using the appropriate process.

An older tradition in legal philosophy, known as natural law theory, takes the opposite view. According to this theory, the validity of a law necessarily depends on both its social sources and its moral content. In Natural Law and the Nature of Law, I argue that natural law theory is correct on this issue; legal positivism is false. My argument proceeds by comparing law to other human artifacts, such as chairs and screwdrivers.

Artifacts are normally defined by reference to their function: the function of a chair is to be sat upon, while the function of a screwdriver is to drive screws. A sturdy and comfortable chair is, other things being equal, a better chair than one that is unstable and awkward to sit on.  Similarly, a screwdriver that drives screws well and with little effort is a better screwdriver than one that breaks easily or is difficult to use.

Not every artifact necessarily plays its function well. A very fragile, unstable and uncomfortable chair is still a chair – although we might call it a defective chair. Imagine, however, a purported chair that is so poorly designed that it is not even possible for anyone to sit on it. Maybe it has arms, legs and a back, but the designer forgot to include a seat. It seems plausible that such an object fails to count as a chair at all.

Law, like other artifacts, is created by humans to play a particular role. What, then, is the function of law? I argue that law’s function is to mark the boundaries of permissible social conduct by creating a sense of social obligation. We rely upon law to tell us how it is appropriate to behave. Law does this not merely by threatening sanctions, but by becoming part of our social norms and practices.

Some laws are better suited to this function than others. A law that is so badly drafted that it is difficult to understand is poorly suited to play its function. It seems like a defective example. A defective law is still a law, albeit a poor one. However, some purported laws seem to be so flawed that they are not really laws at all.

Consider a secret law that it is impossible to follow, because nobody even knows about it. Or imagine a law that is so contrary to shared moral values that almost nobody would obey it – like the hypothetical Eldest Child Act, which requires parents to immediately kill their eldest child or be punished by a nominal fine.

Enactments like these are incapable of playing law’s function of guiding social behaviour. They fail so badly that they are not even defective laws – rather, they are not laws in the first place. In the case of the Eldest Child Act, the enactment fails to become law because it is so morally repugnant that it is incapable of being generally accepted. It is not law, because it fails a necessary moral test for legal validity. 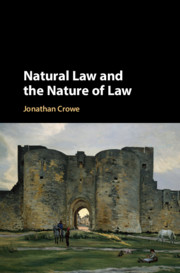 Natural Law and the Nature of Law by Jonathan Crowe

About the Author: Jonathan Crowe

Jonathan Crowe is Professor of Law at Bond University and the author of Natural Law and the Nature of Law (Cambridge University Press, 2019). Thanks to Catherine Carol and Constance Youngwon Lee for helpful comments. ...