An Introduction to the Desert Fathers

The Desert Fathers were the earliest Christian monks. They are the foundation stone of a movement that so developed over the centuries that it eventually wholly took over the Western Church and almost completely that of the East. Although monasticism has declined in recent centuries, various indications of its influence are still quite evident. Many of these can be traced back to those Christians who sought to be alone [monos  > monk] in the caves of Egypt. At about the time the church was legalized and incorporated into the Roman state, an increasing number of men and some women sought to emulate those solitaries and swarmed out into the desert to learn from them. Some solitaries inevitably found themselves at the head of a number of aspirants, not all of whom moved off into their own caves or retreats, but stayed, always at some distance from, but in touch with the elder.  It was in this way that the embryo of the monastery as we know it came into existence: a coenobion, “common life.”  Typically, the members would remain in isolation, each in his own cell, until the sixth day of the week, when all would congregate at a central location, usually for an all-night vigil ending with the Holy Eucharist when a priest was present. There would be a shared meal [agapê] then, when each had traded in his handiwork for raw materials and the necesities of life, he would return to his cell for six more days of alone-ness. Yet in their brief contacts with each other, those early monks developed a large corpus of tales and sayings, transmitted orally (in Coptic) and enormously valued as the “sayings [apothegms] of the fathers.” Fortunately, these were later recorded (in Greek) by some refugee monks anxious to preserve the traditions of the elders. These apothegms (almost 3,000 survive) were to have (and still do have) an enormous formative influence on the monastic movement. They also provide our most important source of information about the Desert Fathers. Basing his study mainly on the apothegms (but also on the anonymous History of the Monks in Egypt ca 397, and Palladius’ Lausiac History, ca 420) Wortley attempts to use the fathers’ own words to familiarise the reader with various aspects of their life, such as the great dangers (i.e. temptations) they experienced, what they were hoping to achieve,  how (because they must not only be self-supporting, but also able to assist the needy and entertain the guest) monks were always doing their handiwork, many of them processing the raw materials of the desert into rope, baskets and mats. While they worked, they were always “meditating,” – not in silence, but by reciting out loud (even singing) long passages of Scripture previously memorised. In this way, while pursuing the Gospel precepts and the monastic traditions with discretion, they hoped to achieve hêsychia, by which they meant an inner silence, and, eventually repose [anapausis,] defined as profound calm and great peace within. 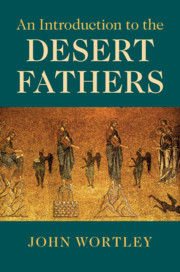 An Introduction to the Desert Fathers by John Wortley

About the Author: John Wortley