Understanding Science Through its History

Todd Timberlake author of Finding our Place in the Solar System discusses the key topic in his new book: The Copernican Revolution. "The Earth really does go around the Sun, but for a long time it was entirely reasonable to believe otherwise. This helps us to see why scientific controversies exist, but also how they are eventually resolved" 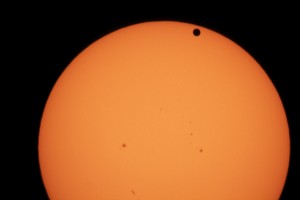 “Photograph of the transit of Venus across the Sun on 5 June 2012. Venus is the circular spot at the upper right. Other features visible on the Sun’s disk are sunspots. The first recorded observation of a transit of Venus was made by Jeremiah Horrocks in 1639. The planetary theory of Johannes Kepler had predicted a near miss at that time, but Horrocks updated and improved the theory and predicted that a transit would occur, which he duly observed by projecting a telescopic image of the Sun onto paper (as described in his Venus in Sole Visa). (Photo credit: Kalen Maloney.)”

Most people encounter science primarily through schooling. Many school science textbooks, and the courses that utilize them, present science as a series of facts, formulas, and theories to be memorized and applied. The best of these aim to generate a deep understanding of our current scientific knowledge, but they still focus on science as a finished product. Popular science books might aim to give the reader access to the cutting edge of scientific research, but these too focus on what we know and not how we came to know it. How is an interested reader (or student) to gain an understanding of science itself: what it does and how it functions?

Here’s the best way to learn about how science works: become a scientist! I highly recommend this route – it can be lots of fun, but it’s not an option for most people. However, those who cannot be scientists can still gain tremendous insight into the workings of science by learning about the history of a scientific field. This was precisely my goal in writing (with my friend Paul Wallace) Finding Our Place in the Solar System. I wanted to take readers on a journey through the scientific process.

Now, if you are going to learn about how science was done you might as well do it by learning how some really important science was done. It doesn’t get much more important than the Copernican Revolution, the transformation in human understanding from the ancient geocentric cosmos to the modern heliocentric solar system. This episode in scientific history serves as an excellent case study on the nature of science for several reasons. For one thing, it was controversial but now it is settled. The Earth really does go around the Sun, but for a long time it was entirely reasonable to believe otherwise. This helps us to see why scientific controversies exist, but also how they are eventually resolved.

Studying the Copernican Revolution helps us to understand things that we experience in our everyday lives: the motions of the Sun, Moon, and stars, the seasons, the measurement of time, gravity, the motion of falling objects, the phases of the Moon, and even rare events like eclipses or transits. The process by which we came to understand these seemingly ordinary phenomena is more interesting and subtle than you might think, and learning about that process emphasizes that science is about understanding and explaining the real world that we experience. Black holes and string theory are exciting topics, but they are completely disconnected from the actual experiences of most people.

The story of the Copernican Revolution also shows that science is more complicated, but also more interesting than the five step “scientific method” you may have learned in grade school. Sure, there are careful observations as well as building and testing of scientific models (or hypotheses). But there are also disruptive new ideas and technologies, errors and dead ends that were eventually uncovered and corrected, philosophical and aesthetic considerations, even religious and sociological concerns. These aspects of the story highlight the fact that science is done by human beings who are influenced by many subjective factors (for good or ill). Science, though, is also a collective behavior in which the community of scientists can reach more objective conclusions in spite of the subjectivity of individual human scientists. Collective change, like the Copernican Revolution, can be slow, but it is also more reliable than the work of any individual.

The story of the Copernican Revolution is a story about science, but it is also a human story. It is one of the great human stories. Reading about that story won’t make you a scientist, but it is like riding along for two millennia of scientific history. By the time the ride is over you will have a better idea of how scientists navigate their way toward a greater understanding of the natural world.