Legal Authority Beyond the State – Towards New Insights into International Law

There are now thousands of public and private regulatory bodies which seek to regulate transnational activities consequently forming a disorganised system that is instituted by, and directed towards the interests of, private actors - but why? Patrick Capps and Henrik Palmer Olsen investigate further.

Global governance is here. There are now thousands of public and private regulatory bodies which seek to regulate transnational activities to pursue various global public goods, such as food safety, human rights, a healthy environment, fair trade standards etc. There is also a proliferation of international organisations and courts. This, however, forms a disorganised system that is instituted by, and directed towards the interests of, private actors, as much as states or their citizens. Why should any of us comply with the directives of such bodies and courts? How do they become authoritative? 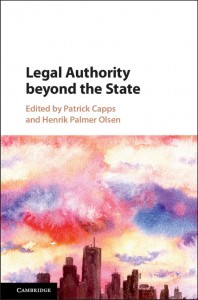 Why should any of us comply with the directives of such bodies and courts? How do they become authoritative?

In our role as editors of Legal Authority Beyond the State, we refused to be prescriptive to our contributors about when authority would authentically be created, sustained and institutionalized. That said, three of the chapters use Alan Brudner’s ‘career of authority’ as an organizing concept, and a brief discussion of his work will illustrate the approach in our book. Brudner distinguishes various logically interconnected and familiar forms of authority beginning with purely arbitrary power, through despotic governance by rules and forms of participatory governance to an idealized form of republican governance. For each stage, he argues that there are sound reasons for compliance with the words of the body or person claiming authority, except where disobedience is justified as an attempt to move authority to a more legitimate stage. The claim, then, is that when congruence is observed between an global regulator or court and the action of those they address, then the model of authority just outlined explain where that congruence is plausibly interpreted as the product of rational, purposive, submission to authority, or where we need another explanation (perhaps through various contextual factors, such as socio-economic domination, corruption, inequality in legal knowledge and resources etc.). This allows us to explain how international authority emerges, evolves and possibly fails, thereby providing a conceptually richer scheme through which empirical findings can be rendered meaningful than purely empirical accounts which just consider the fact of compliance. This is important not only for understanding global legality as it is today, but also for considering how we might achieve a sustainable international rule of law for tomorrow. At its heart, our book is about what genuinely prompts the authority of, and long-term allegiance to, the international legal order.

In Legal Authority Beyond the State, the reasons why it is rational to submit our wills to that of another is our organizing concept, which is then used to explain the immanent legality of international practice. Without this, we cannot fully grasp the ways in which international law is able to establish itself in the sense of prescribing patterns of behavior that states or their citizens are obligated to comply with.

Henrik Palmer Olsen is a Professor of Jurisprudence at the University of Copenhagen. He is a leading expert in legal theory and has published foundational research within the areas of jurisprudence, the separation of powers and the relationship between institutional design and notions of justice, with a recent focus on international courts....

About the Author: Professor Patrick Capps