Knowing What Knowing Is

Do you know what knowledge is? Before you reply, ponder for a moment the Gettier problem. It’s a puzzle. It’s a challenge. It was a moment; now it’s a tradition. It’s a centrepiece of contemporary philosophy – a conundrum about knowledge. It makes potent the possibility that we will never fully understand knowledge’s nature.

The Gettier problem is named for Edmund Gettier, an American philosopher (1927–). In 1963, the philosophy journal Analysis published his article ‘Is justified true belief knowledge?’ The article posed a question, sparking further questions, lighting a philosophical fire. Exactly what is knowledge? That is what Gettier was asking. He did it by challenging this picture:

Knowledge = A state of mind (such as belief) that is true (accurate in what it represents or claims) and well supported or justified (in a rational or truth-conducive way, such as by good evidence).

That is the justified-true-belief (JTB) theory of knowledge. It looks good, doesn’t it? Succinct and informative. Yet Gettier described two possible situations, each containing a justified true belief that fails – or so it seems to most philosophers – to be knowledge.

What is knowledge, then? The Gettier Problem (a 2019 CUP book, edited by me), surveys a history and envisions a future. Epistemology is philosophy’s engagement with questions about knowledge. (Elsewhere, I have called it ‘knowledgeology’.) Post-1963 epistemology has long been partly post-Gettier epistemology – in the sense of being somewhat shaped and animated by what Gettier is taken to have revealed. Many epistemologists continue wondering what knowledge is – if not simply and always a justified true belief.

This is not the venue for examining the minutiae of Gettier’s challenge and post-Gettier epistemology. But we may glean an idea of all of that, through a similar pre-1963 puzzle from the English philosopher Bertrand Russell (1872–1970). It is his stopped-clock case (from his 1948 book, Human Knowledge: Its Scope and Limits). Imagine believing that it is 9:12, say – because you looked at a clock on the wall while walking past it. The time is 9:12. Earlier, however, that clock had stopped – at 9:12 on the previous day. So you have an accurate belief (‘It is 9:12’). Is your belief also supported by good evidence (courtesy of that clock and your history of relying on clocks)? Yet even if it is, does your belief fail to be knowledge that the time is 9:12?

The challenge here is to respond with philosophical understanding. Can you say why this particular belief is not knowledge? And can you turn your answer to that question into a clear and accurate picture of what in general is needed if a belief is to be knowledge?

You might be surprised at how difficult this is to do. Perhaps it is impossible. Yet think of how routinely knowledge is sought and claimed – by individuals, universities, governments, companies, etc. Do we genuinely understand what is thereby being claimed and sought? The word ‘knowledge’ is used. It is used as if it is understood. But what if we merely – mistakenly – feel as if we understand it? 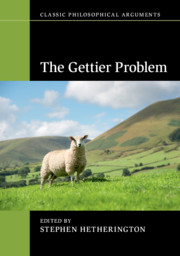 About the Author: Stephen Hetherington

Stephen Hetherington is Professor of Philosophy at the University of New South Wales, Sydney. His many publications in epistemology include Knowledge and the Gettier Problem (Cambridge, 2016)....