Remembering the Armistice in America

On November 11 2018, nations around the world will commemorate the centenary of the end of World War One, remembering the armistice that concluded the first truly global war and the deadliest and costliest conflict Europe had ever seen. In the UK, sections of the Blood Swept Lands and Seas of Red installation of ceramic poppies that attracted such large crowds at the Tower of London in 2014 will be re-displayed at the Imperial War Museums in London and Manchester; and at 11am, the capital’s churches will ring their bells as they did a hundred years earlier. In France, world leaders will assemble in Paris on the centennial for a program of commemoration, following on from President Macron’s tour of the regions of Northern France devastated by the conflict. Although President Trump will be in attendance, there will be no comparable commemorations in the US. And in contrast to the many new libraries, museums, and gardens built around the world to mark the centennial, the long-awaited creation of a National WWI Memorial in Washington D.C. remains at the development stage. These are symptoms of the fact that in the United States, WWI remains a largely forgotten war, with the origins and the consequences of American involvement poorly understood and treated with widespread indifference. In a nation that regularly and compulsively returns to other conflicts in commemorative, imaginative, and scholarly ways—The Civil War, WWII, and Vietnam especially—the legacy of WWI is often crowded out.

Yet historians, especially recently, have persuasively argued that the conflict did much to set the course of the twentieth-century US. It spurred significant advances in feminist and African American activism, produced a generation of citizen-soldiers whose advocacy would shape the GI Bill of 1944, and led to a free speech movement that gave birth to the ACLU and shaped 20th-century American jurisprudence on the first amendment. In my recent book, World War One, American Literature, and the Federal State, I look at how the war-era transformations of what the historian Patrick Joyce calls the “mundane state” shaped the nation and the literature of one of America’s most fertile creative decades, the 1920s. Although the literary legacy of the war is commonly remembered in the fiction of the so-called “lost generation” of American authors such as Ernest Hemingway, F. Scott Fitzgerald, and E. E. Cummings, who saw the war as a shattering experience of moral and political disillusion, another tradition emerged—one far more receptive to exploring the new place of the state in American lives, and the new kinds of citizenship the war had enabled. This literature thought about the new American craze for the private motor car—a craze everywhere shaped by new federal spending on roads as well as new laws on driving tests and licenses, new traffic police, and new gasoline taxes. It considered how new federal involvement in healthcare through the new Veterans’ Bureau, with its extensive Rehabilitation program, had changed the nature of being a war hero. And it thought about how ‘regional’ experience—long-established as one of the quintessential preoccupations of American writing—had been transformed by increasingly centralized political power. How American literature understood the postwar state—in an era when political graft and scandal, and widespread hostility to government overreach, often sat uneasily with an ever-increasing reliance on the state in the practices of everyday life—has a continuing relevance to the American experience. 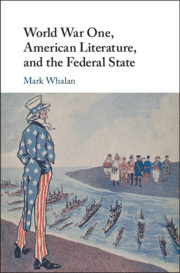 World War One, American Literature, and the Federal State by Mark Whalan

World War One, American Literature, and the Federal State is written by Mark Whalan

About the Author: Mark Whalan

Mark Whalan is Robert and Eve Horn Professor of English at the University of Oregon. His previous books include American Culture in the 1910s (2010), The Great War and the Culture of the New Negro (2008), and Race, Manhood and Modernism in America: The Short Story Cycles of Sherwood Anderson and Jean Toomer (2007). He has published in American Lite...