Jean-René Roy author of Unveiling Galaxies discusses the importance of images in astronomical discovery and understanding.

The Role of Images in Astronomical Discovery

Hosting a couple of hundred billions stars, NGC 4993 is a fairly common galaxy laying at about 150 million light-years in the constellation of the Sea Serpent. On 17 August 2017, it sent thousands of astronomers running to their telescopes.  The two Laser Interferometer Gravitational Wave Observatories (LIGO) at Livingston, Louisiana and Hanford, Washington had detected a passing gravitational wave. For a brief moment, the 4 km long L-shaped arms of this incredibly sensitive machine shrank and stretched by an infinitesimal but measurable amount.  The culprit was a pair of neutron stars crashing into each other shaking space-time and producing a colossal firework.

An image allows us to see things, to record and describe them, to prove that they exist and to reflect on them.

This time, the gravitational wave burst was not coming from an unidentified cosmic ghost. In contrast to the previous events caused by merging massive stellar black holes, this time there was a flash of gamma rays followed by a light pulse that lasted for about a dozen days.  The images, obtained at almost all wavelengths of the electromagnetic spectrum, were not spectacular. Still they provided crucial evidence for two coalescing neutron stars in their last orbits. The images of event GW170817 in the galaxy NGC 4993 have entered the gallery of transformative images. 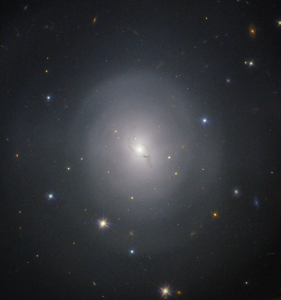 The luminous flash of GW170817 in the galaxy NGC 4993 seen with the Hubble Space Telescope. The event is the orange colour point at about 10 o’clock from the bright nucleus. Credit: NASA, ESA

Galaxies are the building blocks of the universe. Held together by gravitation, they are gigantic systems of stars and clouds of gas and dust. They populate the universe in the billions. We defined our cosmic geography less than a century ago.

Discovering galaxies and determining their nature was indeed a long path full of obstacles, confusion, debates, conflicts and finally convergence. This arduous road and exhilarating venture I re-tell in Unveiling Galaxies, The Role of Images in Astronomical Discovery. To do so, I employ a specific perspective, that of the role of viewing, drawing, photographing, that is the making of and figuring out the nature of ‘nebulae’ from images, and how this long and time honoured picturing process helped bring out the world of galaxies.   An image allows us to see things, to record and describe them, to prove that they exist and to reflect on them. The image of galaxy NGC 4993 caught in the act is one of many transformative images that have been engines of discovery and that I describe in my book.

To ground my story, I borrowed from the works of scholars who have disentangled the scientific discovery process: historians, sociologists and epistemologists.  Their perspicuous investigations have explored the minds of scientists and dissected their products. [1] These scholars have helped us understand why it took one thousand years between the first viewing of  ‘nebulae’ and the final unveiling of the world of galaxies in the initial part of the 20th century.  Thus I encapsulate the works of many. Ambitiously, I am striving to build a bridge between the genre of science writing typical of scientists and the history of science literature.