When I began studying the relationship between American leaders and followers in the late nineteenth and early twentieth centuries, I made what seemed an obvious assumption: Theodore Roosevelt had to have been a masterful public speaker.  After all, Roosevelt was wildly popular throughout his career, a master of the “bully pulpit” who, along with Woodrow Wilson, largely invented what political scientist Jeffrey Tulis has called “the rhetorical presidency.”  What I examined the evidence, however, what I found was quite a bit more complicated.

As I explain in my book, The Age of Charisma: Leaders, Followers, and Emotions in American Society, 1870-1940, Roosevelt came of age at a time when American politicians, religious leaders, and social activists were embracing a uniquely emotional style of public speaking called “personal magnetism.”  Based on the elocutionary theories of Dr. James Rush, the magnetic style and its practitioners thrilled and inspired late nineteenth century audiences as never before.  Personal magnetism’s most accomplished political practitioner, former Nebraska congressman William Jennings Bryan, deployed the style in his electrifying “Cross of Gold” speech at the 1896 Democratic convention; he won such a devoted national following that he was nominated for president three times.

Unlike Bryan, however, Roosevelt never learned the magnetic style.  His rhetoric teacher at Harvard, Adams Sherman Hill, was openly hostile to emotional oratory: “Our feelings ought to be regulated by the facts which excite them,” Hill wrote in an 1893 textbook.  During his college years, Roosevelt had “almost a defect in his speech,” wrote classmate Charles G. Washburn, “which made his utterance at times deliberate and even halting. … In his excitement he would sometimes lose altogether the power of articulation.”  “He still had difficulty in enunciating clearly or even in running off his words smoothly,” recalled classmate William Roscoe Thayer.  “At times he could hardly get them out at all, and then he would rush on for a few sentences, as skaters redouble their pace over thin ice.”

Roosevelt eventually overcame his speech impediment, but he never became a good public speaker.  In 1942, graduate student William Auburn Behl wrote to a number of journalists who had known Roosevelt and asked for their opinions of the late president’s speaking style.  Unlike Bryan, who “had magic,” responded Julian Street, Roosevelt “wasn’t a great speaker but one felt the force and magnetism of his personality and…his great honesty and genuineness.”  Others were less charitable.  Roosevelt’s speech was oddly high-pitched and his gestures jerky and off-putting – “terrible,” William Allen White called them.  “He leaned toward the audience,” remembered G. N. Keniston, “using fist and index finger gestures – flashing eyes and snapping teeth.”  (Indeed, Roosevelt developed the off-putting habit of audibly clacking his teeth together during emotional parts of a speech.)  TR was “tiring to listen to,” agreed William Bayard Hale in 1912, because he “grimaces constantly and gesticulates continually.” 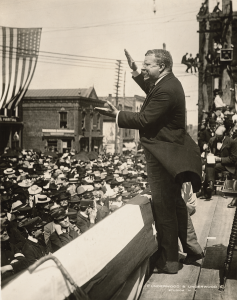 Apart from a few famous epigrams, Roosevelt’s speeches, too, were often dry, equivocal, and monotonous, in part because he obsessively revised them and then had them typed paragraph by paragraph on half-sheets of paper rather than delivering them extemporaneously as most magnetic orators did.  (Don’t take my word for it, though; you can listen to one of his speeches here.)  Roosevelt’s poor speeches caused him serious problems during the 1912 presidential campaign, when TR’s aides arranged his speaking schedule to maximize the number of newspapers that would reprint his speeches – failing to realize that the printed text itself did little to advance their candidate’s cause with voters.

Roosevelt found success as a politician not because of his oratorical prowess, but because of his boundless energy and tireless work ethic.  “Theodore Roosevelt is a marvel as a campaigner,” wrote journalist Luther M. Little in 1900, “more from his tremendous strength, energy, force, and endurance than from finish and grace of delivery or diction.”  As William McKinley’s running mate in 1900, he barnstormed the country on a three-month speaking tour; as president, he set a record for handshaking that stood for seven decades.  On the stump, Roosevelt managed to win over audiences despite his dull printed speeches.  After reading each paragraph, recalled Congressman Schuyler Merritt, Roosevelt would drop the page at his feet and “would either say something which would bring the audience to its feet in applause, or say something humorous, which would cause them to laugh” – forging a durable emotional connection with voters.

Why should we care about Roosevelt’s lack of elocutionary prowess?  Perhaps because it serves as a reminder that even the most reasonable of historical assumptions are only that – assumptions – until verified with evidence.  In the end, Theodore Roosevelt was mostly, but not entirely, what I expected him to be.  He was a successful politician with a real following among ordinary Americans; he was an energetic and sought-after campaigner.  He simply wasn’t, ultimately, a very good public speaker.

About the Author: Jeremy C. Young

Jeremy C. Young is an assistant professor of history at Dixie State University and the author of The Age of Charisma: Leaders, Followers, and Emotions in American Society, 1870-1940 (Cambridge University Press, 2017). ...