Darwin and Women: the story of Amy and Elizabeth

Amy Darwin: Bernard Darwin, The world that Fred made: an autobiography. London: 1955. Pl. facing p. 14. By permission of the Syndics of Cambridge University Library.

Darwin and Women: the story of Amy and Elizabeth

In this blog post Samantha Evans, editor of Darwin and Women: A Selection of Letters, looks at the lives of some of the women surrounding Darwin.

Darwin’s second surviving daughter, Elizabeth, has much less of a public persona than her sister Henrietta, or even the much loved Annie, who died at the age of 10. She may have had some developmental problems as a child, but her later letters suggest a calm and thoughtful woman. Bernard Darwin, her nephew, comments in his autobiography (The world that Fred made, 1955), ‘In some ways she was, though so much her inferior in intellect, more sensitive than Aunt Etty, and I think I would rather have had her judgment of character, which was instinctive but wonderfully sound. … If she had not the wits of the rest of the family and had been a little “hadden down” by her elder sister, she had by way of compensation better health, and was certainly free from their tendency to cosset themselves’ (p. 59). When I was selecting a photograph of her for the book, I chose one of her in a white dress with a locket around her neck on a dark ribbon; a carte-de-visite photograph in which she is unsmiling (as most Victorian photographic portraits are) but not sulky. Looking more closely at the props provided by the photographer, I was puzzled by her chair. It had a very low seat with a high back and a lot of padding and fringing at the top of the back. It turned out to be a prie-dieu (a chair made especially for praying; you could kneel on the low seat and lean your elbows, and a book, on the padded back). While a little ironic for Darwin’s daughter (Elizabeth was in fact an only mildly sceptical churchgoer), this wasn’t unusual. Prie-dieu chairs were a popular photographer’s prop not only for poses of piety but because they showed off the sitter’s bustle to advantage (Elizabeth is not using it for either of these purposes). The photograph was taken by a fashionable society photographer, Alexander Bassano of Piccadilly. 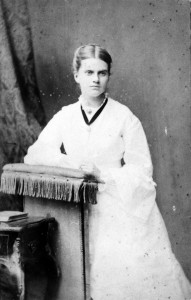 A little later I tracked down a photograph of Amy Ruck, Francis Darwin’s first wife, in Bernard Darwin’s autobiography. She was his mother, and died a few days after he was born. No provenance or date was given for the photograph, and while puzzling over it in order to work out what the copyright status of the picture might be, I realised that I recognised Amy’s chair. It was the prie-dieu again. The background was also the same as in Elizabeth’s picture. Even the book casually left on the table might be the same. The two girls, as friends often do even now, are even dressed alike: white dresses and lockets on a dark ribbon. The overwhelming likelihood was that these photographs were taken at the same session. In the Darwin Archive at Cambridge University Library there is also a studio portrait of Francis Darwin by Bassano; it includes no props, but Bassano’s address and crown imprint on the back are the same as on Elizabeth’s carte de visite. Probably Francis and Amy, newly engaged or newly married, went to Bassano’s to have studio portraits done of themselves, and Elizabeth came too to have a carte-de-visite made. (Their not appearing in the same photograph is not unusual: throughout this period, the Darwins only ever appear one at a time in professional photographers’ portraits, unless an adult is needed to keep a small child still.) 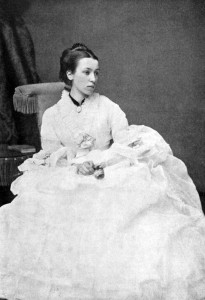 In the aftermath of Amy’s death, only a couple of years after her marriage, Emma worried in particular about Elizabeth. Amy was one of the few people Elizabeth could talk to. The Darwins were a chatty bunch and seem to have rather resented people who were ‘too’ quiet. Elizabeth candidly admitted that she found it difficult to open up to Emma herself, much as she might wish to. A remark by Amy’s mother, soon after Bernard’s birth, when she was trying to keep Amy quiet, that ‘now of course Amy would talk’, suggests that Amy may have been similarly withdrawn with her own mother. Both girls were from large families, dominated by boys, with charismatic, even notorious parents. (Amy’s mother, ‘Nain’ Ruck, was a powerful personality, and her father had been committed to an asylum; details of the case, and of his lurid accusations against himself and his wife, had appeared in The Times.) Did each recognise a fellow spirit in the another? 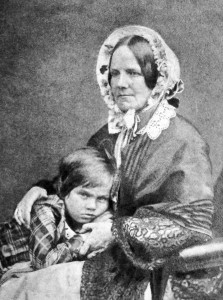 Samantha Evans is the editor of Darwin and Women: A Selection of Letters. Find out more about the Darwin Correspondence Project here