In 2016, as part of our Shakespeare 400 commemorations, we invited the public to submit short play skits inspired by the works of the Bard.

In this interview we talk to Ali Kemp and Deborah Klayman, the co-founders of Whoop ‘n’ Wail Theatre Company, who won our competition with their winning entry ‘My Bloody Laundrette’.

You can read their winning play entry for free here

CUP: Why did you decide to set up Whoop ‘n’ Wail Theatre Company back in 2011?

Ali Kemp: Well, first of all Deborah approached me because she had an idea of something that she was really burning to write, and you really wanted some help to get that going, didn’t you? That was it really, that was the birth of our first play, eXclusion in 2011, and we’ve carried on working together ever since.

Deborah Klayman: We enjoy writing plays that are funny (we hope!), but they do tend to have a bit of black humour.

CUP: Why is Shakespeare important to you?

DK: We’ve got a very particular affinity with Shakespeare because, as actresses, Ali and I actually met working on King Lear.

AK: So Shakespeare is fundamentally important to us!

DK: That was in 2006, so it may be Shakespeare’s 400th anniversary, but it’s the 10th anniversary of us working together. That year we did a world tour of King Lear and we really hit it off straight away. That led us down the path really.

AK: We’ve worked together many times as actors, but also as a writing partnership and subsequently as producers, so Shakespeare gets the credit for that, I guess!

DK: One of the things we are drawn to in Shakespeare’s plays is that he writes quite black comedy at times, and that’s something that we like to do with our writing as well.

With some of the tragedies you also find that, whilst there are obviously some upsetting moments, you do have moments where there are quite ‘light’ parts (for instance with King Lear). Even in the comedies you have some quite dark moments. Twelfth Night is a good example, where you have comedic scenes and then you have what happens to Malvolio.

AK: Although it depends on how it is played and how it’s produced, how it’s interpreted by the actors and director.

DK: Yes, and implicit in the text there is quite a lot of scope for that. With other writers you don’t necessarily get so many options for how to play it, and I think Shakespeare really gives a lot of different opportunities, it’s got that light and dark, which is reflective of all people.

Shakespeare really gives a lot of different opportunities, it’s got that light and dark, which is reflective of all people.

AK: And I suppose that never gets old, because of the endless numbers of possibilities for interpretation.

DK: Yes, I think people always talk about the themes being universal and relevant, but I think the characters are intrinsically like that as well because they are so rounded.

CUP: What inspired you to write My Bloody Laundrette?

AK: It was a response to a shout out for short plays by an organisation called 17Percent for their SheWrites Showcase –

AK: Yep, and we had quite recently been introduced to ‘The Bechdel Test’ when we’d started thinking about the play, and thinking about the number of roles for women in the Shakespeare canon. We found it interesting to think about the role of men creating art that is telling female stories, so that’s kind of where it came from initially, and then it developed. We started looking through Shakespeare’s plays to find the characters, and settled upon Juliet.

DK: I think our original concept actually was that it was going to be three Shakespearian women, so they needed to be really recognisable. Juliet was an immediate choice because she’s such an iconic and well known character.

AK: It seems to me that so much happens to her – instigated by men – so she was a really good choice to start with.

DK: Yes, and everyone talks about her and makes decisions for her. And obviously she does talk quite a lot with the nurse and so on, but again, generally speaking it’s about men.

AK: So originally we were thinking that we were going to write about three Shakespearean women, but then we kind of threw it out a bit further –

DK: I had watched something – because we’d been looking at The Bechdel Test at the time – and somebody had talked about the fact that Princess Leia represents everything! She’s a fantastic female character, I mean she’s a wife and a mother at various points throughout the Star Wars canon, however she’s also a senator, she’s a politician, she’s a rebel, she’s a fighter, she’s a general.

DK: And I think if you read about Carrie Fisher, who played her, she seems to have felt the burden of that representation. So she’s definitely an interesting character in that regard because she’s such a strong, such a positive female character, and yet she’s the only one.

AK: And being everything to everyone.

DK: And so differently from Juliet we felt almost that she was over burdened with all of the things that she was being.

AK: We felt actually that you could have just had five female characters, but with Princess Leia they were all rolled into one. We felt that she had a very different burden on her.

We felt that she had a very different burden on her.

DK: So, we then thought that if we have these two characters it would be quite interesting to have three different art forms, and the most iconic woman we could think of in Fine Art was the Mona Lisa.

AK: There’s been so much speculation as to what she’s thinking, what’s she’s doing –

DK: And I mean the attacks that she’s suffered over the years!

DK: She’s even had paint thrown on her.

AK: It’s quite interesting that a painting could generate such a response from its viewers. So, she was the obvious third choice for us.

DK: And once we had the three characters the play kind of wrote itself.

CUP: What projects are you currently working on?

DK: We have quite a few things in the pipeline, we haven’t written a full length play since eXclusion because we have been focusing on new writing, The Bechdel Test –

AK: And Whoop ‘n’ Wail Represents… which is ongoing.

DK: Absolutely. Represents… is quite a time consuming venture because Ali and I do all of that. We manage open submissions for plays – which, as I’m sure you know, takes a lot of time and reading! Once we have the scripts then we give two to each director to choose between, and we give a female writer to a male director and vice versa.

DK: So all the plays have to pass The Bechdel Test, but we have three male writers and three female writers.

AK: And we have three male directors and three female directors. It makes the whole experience very much a gender equal collaboration.

DK: Then the director will do the casting and will invite the writers to be involved in the rehearsal process. We normally do two nights of the production (six plays). They are quite work intensive but we have got a huge amount out of doing it.

AK: Personally, but also in terms of working with talented writers, directors and actors – and there’s been a lot of ongoing collaboration between them, so that’s really exciting, introducing artists to each other, which has been very gratifying for us.

DK: We’ve also had feedback from some of the writers that the remit we’ve set has actually influenced them and their craft as well.

AK: Alongside Represents… we are also writing our second full length play which we’ve been researching and it’s now starting to take shape now.

DK: We can’t say too much more about it now – it’s at a very early stage.

AK: So watch this space! 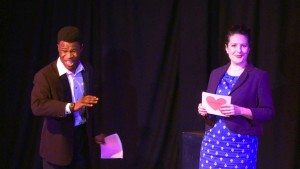 CUP: What is your favourite Shakespeare play and why?

DK: Aw! Well sorry, mine is Macbeth! Firstly, it’s ‘the Scottish play’ and I’m Scottish, but also because I find the characters and the themes really interesting, and it’s the part I’ve always wanted to play – as an actor, Lady Macbeth is the part to play! I do also like Henry VI Part III, which may be a little obscure, but there are some really great speeches for Queen Margaret.

You can also find out more about the theatre company at:

About the Author: Ali Kemp

Whoop ‘n’ Wail Theatre Company was founded in 2011 by Ali Kemp and Deborah Klayman. An innovative emerging theatre company, Whoop ‘n’ Wail is based in London and is dedicated to producing quality drama with a sense of humour and a social conscience...

About the Author: Deborah Klayman

Whoop ‘n’ Wail Theatre Company was founded in 2011 by Ali Kemp and Deborah Klayman. An innovative emerging theatre company, Whoop ‘n’ Wail is based in London and is dedicated to producing quality drama with a sense of humour and a social conscience...