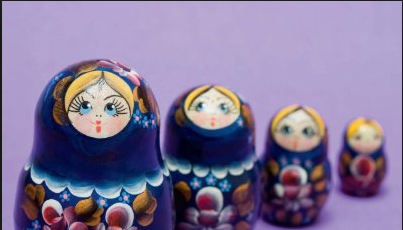 Cambridge University Press recently published my book The Law of Collaborative Defence Procurement in the European Union. Now many people ask me: “Your book is about defence procurement, right? So why do you have matryoshka dolls on the cover?”

Well the answer is simple: I use the image of matryoshka dolls to conceptualise collaborative defence procurement.

In collaborative defence procurement, a number of states decide to buy some expensive piece of military equipment together, for instance a combat aircraft or a warship. This allows them to reduce costs through economies of scale and the sharing development costs, and to increase the interoperability of their armed forces by using the same equipment. A “programme management entity” (an international organisation or a lead nation) is tasked by the participating states with the award of the contract and the management of the programme.

So as we can see the image of the matryoshka dolls is a perfect way to conceptualise the legal and organisational structure of collaborative defence procurement, and is valid as well as a model for multinational collaborative procurement in general, even outside the defence sector. So the book is of interest, not only to specialists and academics active in the defence sector, but to a wider professional public as well. Nevertheless, this matryoshka doll can be especially complex in the defence sector, as a number of exemptions can be relied on (sometimes abusively) in order to avoid complying with EU law, in particular to protect the essential security interests of the participating states.

In addition, a picture of matryoshka dolls on a book dealing with defence procurement is more original – and to some, more eye-catching – than the traditional picture of a fighter aircraft, a main battle tank or a battleship…

About the Author: Baudouin Heuninckx

Baudouin Heuninckx, MCIPS, is the Chief Counsel of the Belgian Armed Forces Procurement Division and a part-time academic at the University of Nottingham and the Belgian Royal Military Academy....