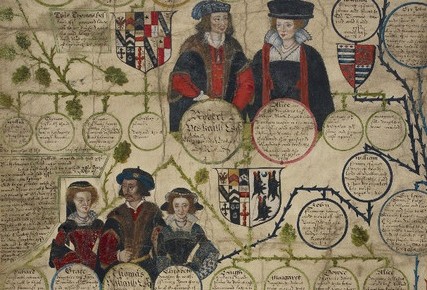 Michelle M. Dowd looks at how Shakespeare tackled the everyday issue at the time, and how that adds to his legacy today.

Beginning with the earliest commendatory poems that appeared in the opening pages of the First Folio of 1623, Shakespeare has been praised as the poet of nature, the playwright of intrinsic talent and artistic vision whose legacy is nothing less than poetic greatness itself. Certainly a large part of Shakespeare’s continued appeal lies in his literary artistry and poetic skill.  But Shakespeare was also very much interested in the more everyday world of economics and domestic life, even though we tend not to think of these things as part of his “legacy” as a playwright.

Let’s take the example of inheritance. The transfer of money, goods, and family name from one generation to the next is not a particularly glamorous topic, and it might initially seem to be an unlikely subject for a play.  But inheritance was not merely an abstract legal process in Shakespeare England; it was one of the most profound cultural and economic forces shaping the everyday lives of English families.  In many ways, our popular perceptions of English culture are to this day bound up with questions of inheritance.  As the recently concluded, enormously popular BBC television series Downton Abbey reminded us, restrictions on who could inherit the estate could have significant consequences for families (enter Lady Mary Crawley and all the drama that surrounded her marital prospects beginning in the show’s first episode).  We tend to trace this kind of “inheritance drama” back to Jane Austen, and for good reason: not only did novels like Pride and Prejudice transform inheritance into compelling narrative, but at the time that Austen wrote in the early nineteenth century, inheritance practice were quite rigid, making them an obvious foil for the interpersonal relationships that mark her novels.

But in Shakespeare’s England, inheritance practices were much more fluid; many strict limitations on inheritance rights had not yet become law. What Shakespeare’s plays offer us, then, is a dramatic index of changing understandings about inheritance; his plays often depict the many things that could (and often did) go wrong with the system, a system in which (at least according to common law) the eldest male was supposed to inherit the family title and the entirety of the estate.  Certainly we see such problems play out in the history plays and in tragedies such as King Lear, where royal succession is a hotly contested issue.  But Shakespeare’s interest in inheritance goes well beyond English royalty.  In late romances such as The Winter’s Tale, Pericles, and The Tempest, Shakespeare stages the challenges faced by families with only daughters.  And he even shows how ideas about genealogy permeate the speech of lower-class characters: in the Induction of The Taming of the Shrew, Christopher Sly comically defends himself in his verbal fight with the Hostess’s by retelling his family tree.

Such examples suggest that we might do well to continue to expand our understanding of Shakespeare’s legacy to consider the less-lofty subjects with which he engaged: the mundane world of daily life, work, money, and family squabbles. How might it change our appreciation of Shakespeare and his plays if we value his engagement with the everyday as a vital part of his artistic legacy?

About the Author: Michelle M. Dowd

Michelle M. Dowd is currently Associate Professor of English at the University of North Carolina, Greensboro and is the incoming Hudson Strode Professor of English and Director of the Hudson Strode Program in Renaissance Studies at the University of Alabama. She is the author of The Dynamics of Inheritance on the Shakespearean Stage (Cambridge Univ...