Shakespeare through the Ages 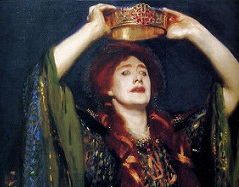 Gail Marshall, author of Shakespeare in the Nineteenth Century and Shakespeare and Victorian Women explores why Shakespeare is still so embedded in our culture and has been through the ages...

As a Victorianist, I’m attuned to the Victorian-ness of the streets I walk through, the buildings I see, the spaces that we all inhabit, and the stories that shape our lives and expectations.  But those spaces and stories are often inflected through Shakespeare too; from the iconic statue of the author in Leicester Square to the porticos of theatres and public buildings, we can see traces of Shakespeare in most of our major cities.  And he can play a part too in the enduring reputations of directors, actors and actresses through the centuries: a good reputation in Shakespeare is an essential part of long-lasting renown. It’s no accident that John Singer Sargent’s famous portrait of Ellen Terry in the National Portrait Gallery represents her as Lady Macbeth, and was inspired by her performance of the part in 1888.  Dressed in her famous dress of iridescent green beetles’ wings, Terry holds her crown aloft.  The moment is not one represented in the play, but her ability to inspire this visual response in Singer Sargent has coloured memories of Terry and Lady Macbeth ever since.

Shakespeare is part of a collective memory that everyone in Britain shares simply through having studied Shakespeare at school.  That set of memories is interestingly coherent. A quick and unscientific survey of multi-generational friends on Facebook, who went to a variety of UK schools, shows that in pre-16 education all but one person studied at least one of: A Midsummer Night’s Dream, Romeo and Juliet, The Merchant of Venice, and Macbeth, with the latter two being the most widely taught.  These plays were also amongst the most popular Shakespeare productions in the nineteenth-century theatre, as Janice Norwood has shown in her ’Reference Guide to performances of Shakespeare’s plays in nineteenth-century London’.  Culturally too, they figure largely in novels, poems and letters from the period, almost forming a second language for the Victorians – literally so in the case of Karl Marx, who is said to have used Shakespeare to help himself to learn English.  Those texts are also amongst the Shakespeare plays to have been published individually most often in the nineteenth century: Mark Hollingsworth has shown that Hamlet tops the list with 63 editions, then Macbeth with 51, The Merchant of Venice 41, Julius Caesar 39, Romeo and Juliet 37, and A Midsummer Night’s Dream 31.  (I don’t doubt that a survey of recent A-level texts would have included Hamlet.)

Perhaps we are still in thrall to the Victorians’ Shakespeare, a figure constructed out of private reading, rather than formal education, and theatre productions which were determined by their opportunity for spectacular display, as in A Midsummer Night’s Dream, or, more importantly, their capacity to give excellent acting opportunities for actor-managers and their leading ladies.  Macbeth, The Merchant of Venice, and Romeo and Juliet all offer brilliant leading roles which could last a life-time: less hung-up on youth than modern audiences, Victorian spectators were happy for Romeo and Juliet to be played by actors and actresses throughout their careers.  As we go to the theatre, or indeed cinema now, to see Shakespeare’s work, and continue to read him, it is possible that what we recognize as we do so is a form of Victorian Shakespeare, embedded in our collective cultural memory, and translated for the twenty-first century.

To win Shakespeare in the Nineteenth Century enter our daily Shakespeare giveaway, Much Ado About Winning – www.cambridge.org/shakespearewin

About the Author: Gail Marshall

Gail Marshall is Professor of Victorian Literature and Director of the Victorian Studies Centre at the University of Leicester....