Into the Intro: Corporate Social Entrepreneurship

We go Into the Intro of Christine A Hemingway's Corporate Social Entrepreneurship: Integrity Within (2014).

However, my starting point is to look at some examples of corporate irresponsibility, in order to begin to address these normative questions about the role of business in society.

What is CSR and why is it necessary?

In contemporary capitalist society, corporations are ubiquitous and so they impact on everyone. Corporate social responsibility (CSR) is therefore a subject of interest to management practitioners and consultants and to the gamut of the academic business and management disciplines, as well as to the academic study of environmental science, law and politics and also to the general public. This is not least because of the prevalence of newsworthy examples of corporate irresponsibility (Hemingway 2005), which can provide an entry point for debates about the role of business in society.

A recent example of corporate misdemeanour was the case of Toyota GB.

The management, based at headquarters in Surrey (UK), had decided to fine their car dealerships if a fault discovered by their mechanics was reported to the customer whilst the car was still under warranty. The warranty policy and procedures manual (seen only by the dealerships) stated that only faults that affect safety and reliability could be reported to customers. But the dealerships voiced their concerns to senior management that there was a grey area where other faults which could not be reported could indirectly affect safety and that the policy was unethical.

Such managerial decisions, which were rescinded after the issue was broadcast in a Sunday newspaper (Insight, 2012), can be understood as a strategic need to reduce business costs. But this can sometimes involve cutting corners as a consequence of the imperative to increase profits, year on year.

Paradoxically (because it is another example of business cost), another contemporary issue in business ethics is excessive executive renumeration across both the public and the private sectors. This is currently being investigated in the UK by the High Pay Commission.

Indeed, the so-called ‘fat cat scandals’ have been numerous, the most infamous example of this being the ‘grotesque pension arrangements’ of Sir Fred Goodwin (Paxman, 2009), who retired as CEO from the Royal Bank of Scotland at fifty years of age.

With a reputation for cost cutting, Goodwin exited with a pension of £635,000 p.a. (£12,000 per week) for the rest of his life, after presiding over the bank’s unprecedented annual loss of £24.1 billion – the biggest loss in British corporate history.

These may be seen as examples of corporations acting irresponsibly. Thus CSR can be defined ‘in terms of the social and environmental impact of systemic organisational activity’ (Maclagan, 1999: 43). This thick construction was broadly illustrated by Gond (2006), whereby CSR represents the interface between business and society (see Figure 0.1 below). 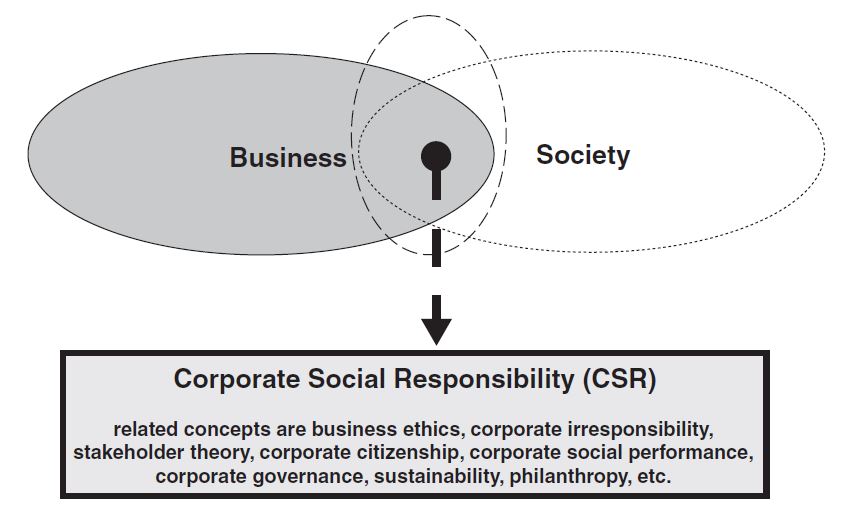 There are other related terms. But here CSR is the generic term which I have used to discuss any activity at this interface between business and society, and therefore it also encompasses corporate misdemeanour and corporate irresponsibility.

Thus the topical and political natures of corporate social responsibility are two important themes. This is because CSR encompasses normative and therefore inherently controversial arguments regarding the role of corporations in society. And these debates have produced three different perspectives on CSR: first, market fundamentalism, sometimes referred to as the theory of the firm, grounded in neoclassical economic theory; second, the business case for CSR, sometimes known as enlightened self-interest; and third, a multifiduciary perspective. At the core of these debates lies the voluntary, discretionary nature of CSR.

CSR may also be seen as a function of the corporation’s changing environment, again producing controversial debates regarding who the corporation’s responsibilities should extend to (Mitchell, Agle and Wood, 1997), against a background of growing corporate power and debates about globalisation (Achbar and Abbott, 2004; Held, 2002; Hertz, 2001).

Indeed, capitalism’s key tenet and what is seen as its sole focus, i.e. the maximisation of wealth, is considered by some to have gone too far, with the gap between the rich and the poor ever widening (Skidelsky and Skidelsky, 2012).

But these concerns are not new. For example, the economic historian Tawney emphasised ‘the social purpose’ as a duty of industry (Tawney, 1926: 242), and was highly critical of how he saw the development of industrialism, when he said that ‘its teaching is that each individual or group has a right to what they can get, and denies that there is any principle, other than the mechanism of the market, which determines what they ought to get’ (Tawney, 1926: 43).

Tawney was greatly opposed to what he saw as a modern society with no limits on personal acquisition, sentiments that were also echoed over forty years ago by the management theorist Peter Drucker, who insisted that managers’ responsibilities were: for the public good, that he subordinate his actions to an ethical standard of conduct, and that he restrain his self-interest and his authority wherever their exercise would infringe upon the common weal and upon the freedom of the individual. (Drucker, 1968: 454)

But other scholars have rejected this interpretation of the role of business and advocate that the pursuit of self-interest is also in society’s interest. These scholars align themselves with the theory of the firm, or neoclassical economic theory, whereby all activity has to be directed towards delivering shareholder value: The classical view of the role of business in society is based on the economic principle that human well-being is served by the efficient use of society’s resources and that the free enterprise system is the best means of achieving that efficiency. (Baron, 2003a: 645)

In this regard, CSR has been condemned as a ‘fundamentally subversive doctrine in a free society’ (Friedman, 1970: 8), or it may be dismissed as an inefficient way to run a business.

For example, Baron referred to stakeholders as ‘the non-market environment’, which ‘is populated by numerous interest groups and activist organizations that raise concerns about the practices of firms and pressure them to change those practices’. (Baron, 2003b: 108)

Another perspective on CSR is referred to as ‘the business case’, whereby CSR has increasingly been adopted as part of strategic business management practice. In these instances, CSR is often handled via public relations, whereby the focus of CSR is to manage stakeholder perceptions, the aim being for the corporation to be seen to be taking its social responsibilities seriously, in the long-term interests of the firm (Brown and Dacin, 1997; McWilliams and Siegel, 2001).

Clearly, a strategic business perspective of CSR would adopt an instrumental, ‘means-to-an-end’, orientation, whereby the emphasis is on corporate image management with stakeholders, for competitive advantage. The business case, however, has increasingly been adopted by corporations who subscribe to the view that ‘good ethics is good business’. This is also referred to as enlightened self-interest (Moir, 2001; Stormer, 2003), whereby greater emphasis is placed on the integration of CSR into the modus operandi of the firm, as well as into its corporate communications.

Thus a stakeholder approach to CSR can be viewed in one of three ways: solely as a PR exercise, as business strategy or from
a multifiduciary (social duty) perspective.

Third, the multifiduciary approach to business ethics and CSR (Goodpaster, 1991) is concerned with a firm’s duty to its stakeholders.

Here, the firm is regarded as having ethical responsibilities ‘to do what’s right and avoid harm . . . going beyond legal requirements’ (Trevin˜o and Nelson, 2004: 32). This may be understood as a different approach to capitalism. The approach emphasises a discourse with all the firm’s stakeholders regarding what might constitute ethically correct corporate behaviour, because it is regarded as the morally right thing to treat all stakeholders fairly and not simply to include them for tactical reasons, due to a potential impact on the firm’s commercial achievements (Maclagan, 1999).

Christine A Hemingway is author of Corporate Social Entrepreneurship: Integrity Within (2014). She is an ex-corporate executive turned academic, having spent over a decade in blue-chip industrial management, followed by 14 years as an academic. She has over 30 years’ experience working in public and private sector organisations. Currently, she is Visiting Fellow at the Nottingham University Business School (UK). Prior to this, she was a Brand Manager in a wide range of different industries, predominantly in fast-moving consumer goods, and latterly was European Marketing Manager with Allied Domecq. She has taught social entrepreneurship at the University of Nottingham and strategic management and marketing at the University of Hull. Her research interests are in the psychological drivers of corporate social responsibility (CSR): business ethics, as well as management and organisational behaviour. Her research centres on moral psychology and social responsibility as a subjective state.