Pope Francis visits Philadelphia for the 2015 World Meeting of Families

Philadelphia’s year-long preparations for Pope Francis’ visit to the city for the 2015 World Meeting of Families (WMOF) bore fruit when the pope, weary but still joyfully greeting all he saw, arrived in the city on Saturday morning, 26 September. 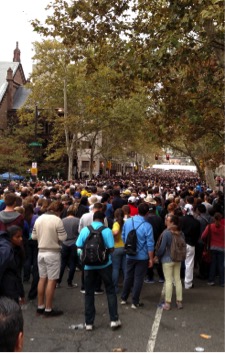 Preceding weeks had seen the local media saturated with news of the government security preparations that had downtown residents in a frenzy for the past couple of months, with rumors of magnetometers, eight-foot fences, transportation shutdowns, and security mandates that seemed to change hourly (deliveries to stores and restaurants? Yes, No, Maybe. Traffic? No cars allowed in or out of the “traffic box” that extends a mile or so in each direction.) One worry was that news of tight security would scare away visitors. Main downtown streets were eerily quiet in the mornings, while afternoons brought large crowds streaming toward the pope’s address at Independence Hall, the Festival of Families, the papal Mass on Sunday (in front of the “Rocky” steps of the Art Museum), and parish groups marching down the traffic-less streets singing. Quite a sight.

The WMOF has not received as much attention from the media as one might expect, given that it has been the most widely attended such gathering in the history of the event. A cursory review of speakers and events reflects the diversity of the global church, even if topics tended to tilt in a more traditional direction. The messages have varied. In his address to a packed crowd in a cavernous convention hall, Cardinal Luis Tagle of the Philippines observed, “You may have a big, big house and still be homeless.” Echoing themes of Pope Francis, he emphasized the importance of encounter, mercy, and healing in the family and in society.

These themes played a major role in both the pope’s amazing address to the U.S. Congress (strongly emphasizing the common good and the need to work for inclusion) and his speech to the United Nations (challenging world leaders to take “effective, practical and constant, concrete steps and immediate measures for preserving and improving the natural environment and thus putting an end as quickly as possible to the phenomenon of social and economic exclusion, with its baneful consequences”).

In his wonderful homily at Mass on Saturday morning in the Cathedral Basilica of Sts. Peter and Paul, Francis used a story from the life of locally-born St. Katherine Drexel to challenge all laity, clergy and religious to act on behalf of the Gospel, have “a sense of personal responsibility for the Church’s mission,” and be “a leaven of the Gospel in our world.” He urged both creativity and continuity in this project: “This will require creativity in adapting to changed situations, carrying forward the legacy of the past not primarily by maintaining our structures and institutions, which have served us well, but above all by being open to the possibilities which the Spirit opens up to us and communicating the joy of the Gospel, daily and in every season of our life.” 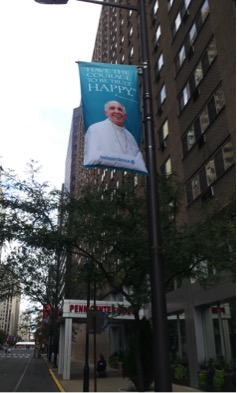 One of the many banners hung throughout center city Philadelphia.

In response to the pope’s emphasis on care for the poor and excluded, a share of media attention has been given to the social justice dimension of the Church’s life. Local public radio affiliate WHYY’s online presence NewsWorks provided a primer on the church in Philadelphia by focusing on the lives of individual people. On the other side of the continent, the LA Times featured a story on the state of the church in Philadelphia that highlighted both the precarious state and the pervading hope that characterizes this diverse community.

Sr. Mary Scullion, Executive Director of Project Home, has been rallying Philadelphians to care for the poor in her role as co-chair of the WMOF Hunger and Homelessness Committee. The committee provides opportunities for direct action. Around the city, a number of communities have taken advantage of the pope’s visit on the occasion of the WMOF to present the legacy of the Catholic community in the city of brotherly love. The American Catholic Historical Society hosted an exhibit that traced the relationship between Philadelphia and Rome. Urban Trinity: The Story of Catholic Philadelphia, a history of the Catholic Church in Philadelphia from the colonial period to the present, has been widely advertised around the city. Urban Trinity is a loving but unflinching look at the pilgrim church, indeed ecclesia semper reformanda est.

And in the midst of that local pilgrim church, Pope Francis’ joyful faith in the grace and power of God, clearly heard in his off-the-cuff remarks on love and the family at the Festival of Families, has evoked a joyous response throughout the city, from Catholics and non-Catholics alike. His message is infectious: “Have the courage to be truly happy.”

About the Author: Nick Rademacher

Nick Rademacher is Secretary of the College Theology Society and Associate Professor at Cabrini College....

About the Author: Tony Godzieba

Tony Godzieba is the Editor of Horizons: The Journal of the College Theology Society and Professor of Theology & Religious Studies at Villanova University....