My Favorite Footnote to Mrs. Dalloway

From Woolf to Homer

Preparing the textual edition of Mrs. Dalloway evolved in stages. First, I traveled to London, Los Angeles, Bloomington, Indiana, and took the train into New York City (where I also teach), to compare the first British edition to all the extant versions of the novel, including holograph draft material and page proofs as well as British and American versions published in Woolf’s lifetime. Collating all of these changes, checking and re-checking them, took a lot of time and demanded an unusual attention to minute detail.

That was tedious work, but also excellent training in beginning to listen for what I came to call the dog whistle of allusions.

The second stage was writing footnotes (after that, came writing the introduction). I began by compiling and assessing all the footnotes to the prior editions of the novel and built outward, reading scholarship on the novel and adding those insights to my growing list. But the most exciting part was when I found a reference that no one had documented before.

One phrase that troubled me came in the midst of the character Septimus Smith’s’s most disturbed and disturbing thoughts. In this scene, the shell-shocked World War One veteran, is in Regent’s Park with his wife, awaiting a doctor’s appointment. Septimus thinks: “His body was macerated until only the nerve fibres were left. It was spread like a veil upon a rock.”

That “veil upon a rock” sounded strange. As did the word “macerated.” There was an allusion in there—I could hear some high frequency resonance—but what was the source? I looked to The Waste Land: “Here is no water but only rock,” but that wasn’t quite right. I wondered if the body on the rock might be Prometheus, so I read versions of Prometheus by both Aeschylus and Shelley, two writers whom Woolf revered, but found nothing. I consulted Yopie Prins’s great article on why Prometheus Bound was such a popular text for Victorian women classicists, still all to no avail. I kept the phrase rolling around in my head, hoping that some day it would chime with something, but I was losing hope. 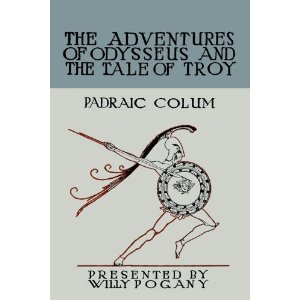 Then, one night, I was reading The Children’s Homer to my daughters and I read: “and then, with the veil bound across his breast, he threw himself into the waves. For two nights and two days he was tossed about on the waters. When on the third day the dawn came and the winds fell he saw land very near…. A great wave took hold of him and flung him toward the shore. Now would his bones have been broken upon the rocks if he had not been ready-minded.” A veil and bones upon rocks on one page. Could this be my clue?

This episode, in which the goddess Ino saves Odysseus from Poseidon’s storm by lending him a magical piece of fabric, appears in Book Five of The Odyssey. Wearing this veil, Odysseus washes onto shore, exhausted, and is soon found by the maid Nausicaa. I was quickly able to confirm that Woolf “read 5 books of the Odyssey” (D2 205) during this time. Thus, I knew she had just re-read this story—and, moreover, seems to have quit reading Homer, whom she did not greatly love, shortly thereafter. Looking a little deeper, I checked which translations of Homer were in the Woolfs’s library and looked at how each translated the name of the magical fabric. Butcher and Lang’s translation renders the Greek as a “veil imperishable.” Moreover, Woolf’s reading notes paused over the image of the rocky coast:  ‘430 | At last he was dashed against rocks; a very odd image comes—his skin was torn off by the rocks’ (Berg RN25 80).

Thanks to some bedtime reading, then, I was able to hear the allusion to Homer in Septimus’s mad thoughts. It’s an echo that resonates profoundly for our understanding of the character for, in this moment, Woolf implicitly compares Septimus’s plight to that of Odysseus, one of the most celebrated traumatized soldiers in Western Civilizations: a connection that I hope will inspire scholars to say more about the role of war in the novel and just one of the hundreds of footnotes in my edition.

Here is the completed footnote:

His body was macerated [ . . . ] like a veil upon a rock The imagery of this passage draws heavily on Book Five of the Odyssey. There, Odysseus, in his protracted journey home from war, finally escapes Calypso and builds a raft, but his enemy Poseidon sends a storm, preventing his landing in Phaeacia. The goddess Ino appears from the waves, saying ‘Here, take this veil imperishable’ (Butcher and Lang 87). (Chapman translates the word as ‘riband’; Buckley uses ‘scarf’.) The veil protects him, allowing him to land on the rocky shore: ‘he would have been stript of his skin and all his bones been broken, but that the goddess, grey-eyed Athene, put a thought into his heart’ (Butcher and Lang 89). Odysseus remains unconscious until awakened by Nausicaa and her hand-maidens days later. VW re-read the Odyssey for ‘On Not Knowing Greek’. Cf. VW’s notes on Book Five of the Odyssey: ‘430 | At last he was dashed against rocks; a very odd image comes—his skin was torn off by the rocks’ (Berg RN25 80). See also: ‘I have read 5 books of the Odyssey’ (D2 205). Septimus’s image of himself recalls the figure of the Greek god Prometheus, bound to a rock in punishment for having given fire to human beings. VW’s tutor Janet Case translated Aeschylus’ Prometheus Bound in 1905 and the Woolfs owned a copy of this translation. For the prominent role of Prometheus Bound among feminist classical scholars, see Prins. Shelley’s verse play Prometheus Unbound opens with a description of the god in a ‘ravine of icy rocks [ . . . ] bound to the Precipice’. See EN 130:10–11.

About the Author: Anne Fernald

Anne Fernald is the editor of the Cambridge Edition of Mrs Dalloway....