There's always an element of shock or surprise when we discover an unexpected visiting spider, but what about when it's one that can jump?

As the night time draws in, and the shift of seasons here in the UK cause the temperatures to drop, my little village home becomes besieged by spiders of all sizes.

They cling to the brickwork and shrubs outside. They make their home between the bins – stretching their ever-hopeful webs in order to ensnare their next meal. But, their industrial engineering seems only to catch me when I step out of my door each morning.

Others – the much larger, brown, and hairy-legged wolf-spider ones – somehow find their way in, running laps of my lounge in the evenings, or standing still in my bath, before I catch them and put them back outside in what feels like an infinite game.

But, these spiders don’t frighten me. They don’t make me jump.

But what if they were the ones that jump?

And they aren’t just in films. 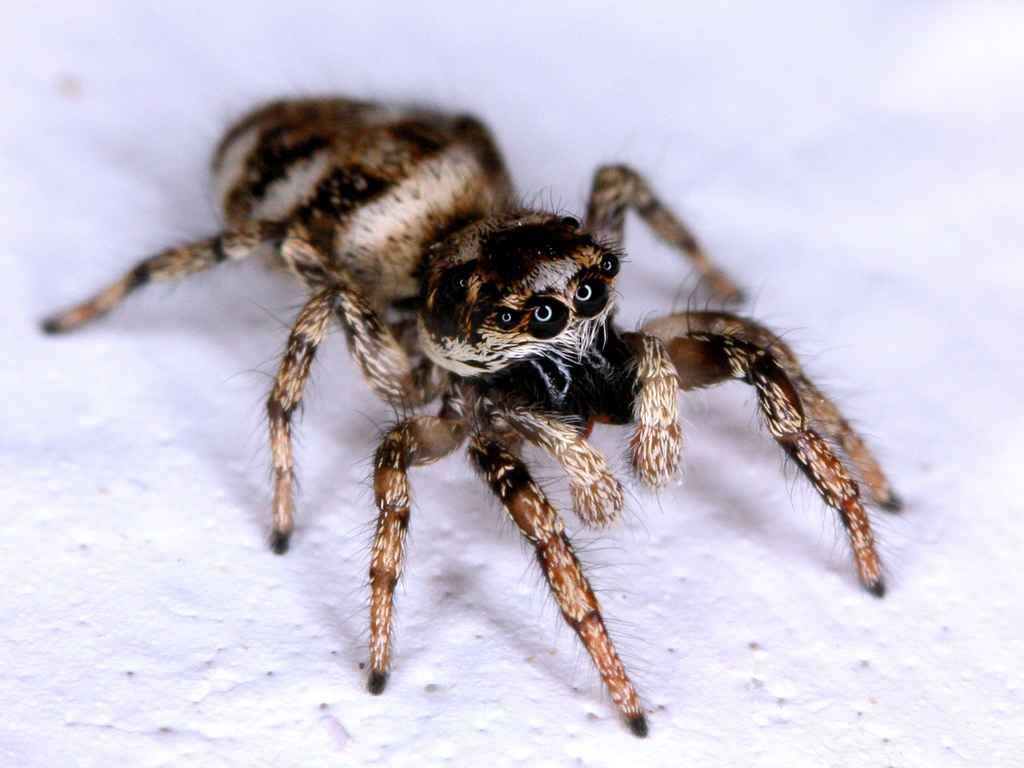 According to Cecil Warburton‘s book Spiders (1912, re-published 2012), there are thousands of jumping spider species, but the Salticus scenicus or catchier-named Zebra Spider is one of around 30 jumping species that can be found in the UK.

The garden-spider entangles its prey in a web, the wolf-spider runs it down by sheer strength and speed, but the jumping spider stalks it.

Unlike its tropical jumping cousins, this one appears to be the fluffy Disney edition – having earned its name not due to it’s prey, but due to its distinct short black and white hairs that give it a striped colouring common to its namesake.

The Zebra Spider’s legs are short and robust, unlike those of the galloping wolf-spider, with fore-legs that are particularly strong. Warburton notes:

“The garden-spider entangles its prey in a web, the wolf-spider runs it down by sheer strength and speed, but the jumping spider stalks it”.

He examines the Zebra Spider further, giving particular admiration to its eyes. All eight of them. Four on the front, and four on the top of it’s high forehead.

He concludes that if a human was to have a comparative set of eyes, they would ‘have to be as large as saucers!’

According to research by Martin Nyffeler of the University of Berne, it is believed that there are about 152 spiders per square metre. Most being absolutely tiny.

Does this mean that there’s a Zebra Spider watching you read this, preparing to pounce?

Warburton does say that the Zebra Spider is perfectly at home upside-down on a horizontal surface, so they can hide anywhere.

But as their body is only about 6.5mm in length, you’re unlikely to come to any harm. They prefer insects.

I bet you’ll still check though.