The Joy of Archival Research

Behind the Scenes of Academic Research

Alex G. Oude Elferink, the author of The Delimitation of the Continental Shelf between Denmark, Germany and the Netherlands, discusses the exciting puzzle of piecing together sources to shed light on an historical mystery.

Looking back, the most fascinating part of my research for The Delimitation of the Continental Shelf between Denmark, Germany and the Netherlands was the collection of relevant documents in the public records of the three countries. Although composing a manuscript on the basis of the material I had gathered in a sense was much more rewarding – it showed that the material I had gathered allowed to tell an interesting story  and it was great to see this coming together – it also required much more effort. The writing process required piecing together a story from many different sources and trying to understand seeming inconsistencies and at times dealing with a paucity of information on essential points. I regularly came to a deeper understanding of what went on during this process. The moment you realize this always comes in flash … “ah yes, this is how it is!” Still, it does not compare to the experience of picking up a document from a folder in the archives and realizing that you are onto something. 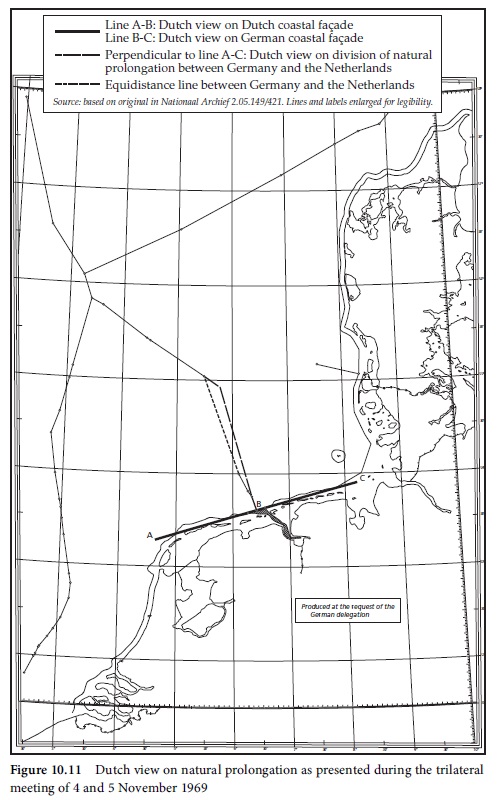 Somewhat curiously, in one instance this concerned a draft of a document that I had already had a look at. However, at that moment I had not yet had access to documents from the archives that shed another light on the final document. When I came across the draft in the archives I immediately realized that one of the Dutch government lawyers had been, to put it undiplomatically, lying to the International Court of Justice. No small matter in my view, although maybe not exactly unique, and I recall pausing for a moment to take in its implications and also thinking “is this really the case?”  Well, it was.

The figure in this post provides another example of finding a key document. When I saw the figure I was puzzled. It showed a line that was less advantageous to Germany than a Dutch claim that had been rejected as unreasonable by the International Court of Justice. How could this have been presented in November 1969, after the judgment of the Court in February of that year? Having a closer look at the legend of the figure and recalling what I had read in documents on earlier negotiating rounds, it dawned on me. The Dutch were telling the Germans that they were not going to negotiate on the basis of the Court’s judgment as had been agreed by Germany and the Netherlands beforehand. I have to add that having grasped this fact from the figure, it still took much research to further document how it got to this point.

A final example of the joy of archival research was the discovery of a report that had been written by professor Rudolf Bernhardt for the German Foreign Office. The report was mentioned in the archives of the Foreign Office, but they did not hold a copy of the report itself. These other documents did suggest that the report had had a significant impact. Enquiries with a former collaborator of professor Bernhardt and the Max Planck Institute in Heidelberg of which he had been the director also did not yield any results. A couple of years later, when I was doing research in archives of the German Ministry for the Economy, the index contained a reference to a folder holding a report. To my delight the folder contained the complete report by professor Bernhardt and when I later had the time to study it in the context of other document it proved to be possibly even more significant as I had at first thought.

Alex G. Oude Elferink is the author of The Delimitation of the Continental Shelf between Denmark, Germany and the Netherlands....