Hemingway’s Letters, Up Close and Personal

Written by: Frances B.

Field Trip to the JFK Presidential Library and Museum

Cambridge's publicity team visits The Hemingway Collection to see a handful of his famed letters.

Even though Cambridge is an academic press, it’s quite rare for us to actually see primary sources up close. Our authors hunt down, analyze, and ultimately write about such documents, but all we see, on our end, is the finished manuscript that we turn into a book. But when we recently had the opportunity to visit the John F. Kennedy Presidential Library and Museum in Boston, we knew exactly what we wanted to see: The Hemingway Collection.

Situated on scenic Columbia Point, with views of downtown Boston and the harbor, since 1968 the JFK Library has been the official repository of the correspondences and papers of the Kennedy Administration. Although JFK and Ernest Hemingway never met in real life, after Hemingway’s death in 1961 President Kennedy lifted the travel ban to Cuba, enabling Mary Hemingway to travel to their former home Finca Vigía and bring back crates of his papers and paintings on a shrimp boat. Mary Hemingway agreed to donate her husband’s collection to the JFK Library only after First Lady Jackie Kennedy personally assured her that there would be a dedicated space for his works and artifacts. 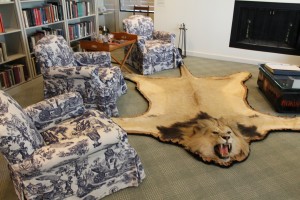 After a brief security clearance, during which we were told what we could and couldn’t bring up to the research floors (no pens or water bottles!), our guide and resident archivist Stacey took us up to The Hemingway Collection. We were ushered into the chilly, triangular room—which is meant to resemble Finca Vigía, from the white window shutters to the original paintings on the wall—when we were immediately taken aback by the lion pelt doubling as a rug on the floor (in mid-roar, no less). Stacey warned us not to step on it, as he’s very fragile, but there was certainly no chance of us doing that. When we asked if Hemingway shot the lion, Stacey conjectured it might’ve been Mary who pulled the trigger. (Good shot, Mary!)

The display cases lining the walls are packed with Hemingway artifacts and memorabilia. There are his dog tags from World War II, when he was a war correspondent for Collier’s; facsimiles of his letters and manuscripts; his travel suitcase; editions of The Old Man and the Sea in different languages; and a handful of his awards and medals. Interesting fact: according to Stacey, his 1954 Nobel Prize for Literature has never been found; it’s rumored that he donated it to a convent in Cuba.

The highlight of our visit was definitely seeing his letters in person—in particular, his previously unpublished short story, “My Life in the 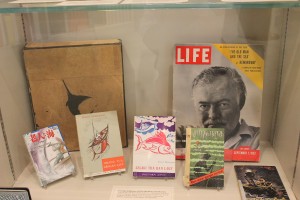 Bullring with Daniel Ogden Stewart.” Encased in plastic sleeves, this work shows his distinctive, bold cursive handwriting; Stacey remarked that his handwriting is so consistent that it’s very easy for archivists and scholars to tell when a piece of writing is a fake. Upon examining Hemingway’s letters, we also had a deeper appreciation for Sandy Spanier and the editorial team working on his letters. Although most of his writings are scanned and then converted into a text document, many still have to be deciphered and transcribed by hand.

The Hemingway Collection contains only a fraction of Hemingway’s papers and artifacts; thousands of materials (manuscripts, letters, photographs, and more) are stored in the JFK Library’s cage, to which only a few senior staff members have access. (Given the high prices that anything related to Hemingway can fetch at auctions, it’s no wonder.) Nonetheless, we enjoyed being up close to the writings of such an iconic American writer himself. And since our visit granted us a “researcher’s pass” that’s valid for a year, we now have the chance to go back!

About the Author: Frances B.