The Birth of a Literary Legend

Our library marketing associate traveled to Illinois, where she visited the birthplace and home of a young boy named Ernest Hemingway. To celebrate the upcoming release of The Letters of Ernest Hemingway: Vol. 2, she gives us an inside peek at the place where it all began.

I stayed in the Midwest for about a week after the American Library Association’s annual conference this year. After spending a few days with family in St. Louis, it was back to Chicago, particularly Oak Park, to roam the neighborhood of Ernest Hemingway’s childhood—a place where Hemingway’s neighbor, Frank Lloyd Wright, said had “so many churches for so many good people to go to.”

We punched the address for the Hemingway Museum into the GPS and came upon this large building, complete with columns and distinct Hemingway draperies. After speaking to a very nice woman at the front desk about his birthplace, we walked through the black and white checkered hallway to the gift shop to purchase our tickets. And hey! What did we see there? The Cambridge Companion to Ernest Hemingway, The Letters of Ernest Hemingway: Volume 1, and the Volume 2 teaser notebooks! Actually, we were talking to the clerk for so long that she tried to sell me the Companion; she seemed shocked when I said that I worked for Cambridge University Press and already had access to that text.

We walked through the museum while we waited for the tour of the birthplace to begin. Although it was a small room, it was filled to the brim with rare Hemingway artifacts, including drafts of his novels, military garb, poetry (both serious and jocular), school photos and report cards (He seemed like a good student…but look at those Ds in music and Latin!), typewriters, hunting equipment, and even a canoe!

There was one area that stood out to me, certainly because Volume 2 of The Letters of Ernest Hemingway focuses on the Paris years. There 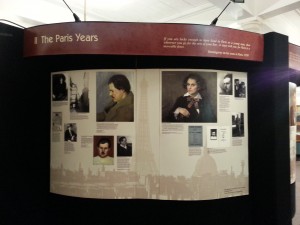 was an entire wall dedicated to his time in Paris, framed by his famous quote, “If you are lucky to have lived in Paris as a young man, then wherever you go for the rest of your live [sic], it stays with you, for Paris is a moveable feast”. With everything from the view from his first apartment, to a reprinting of his passport, to information on his relationships with the likes of Gertrude Stein and Sylvia Beach, to portraits and family photos, this wall reignited the excitement I felt when we spoke as a group with Sandra Spanier about the content of the second volume.

The birthplace, 339 N. Oak Park Avenue, was a five minute walk from the museum. The picturesque Queen Anne style home was built by Ernest’s maternal grandparents in the 1890s. Although the house has undergone extensive changes since the Hemingways moved out when Ernest was six years old, it has been restored so that visitors can see just how it looked when young Hemingway sat on his grandfather’s lap telling stories.

The flower lined wood-plank sidewalk welcomed us through the shade of the large trees to the heavy wood and glass front door. Off to the right of the walk stand a large wooden sign and a small stone monument declaring that on July 21, 1899, Ernest Hemingway was welcomed into the world in this very house.

The entryway of the house was so beautiful. It has a lush red carpet and red and white striped walls surrounding the intricate staircase. There 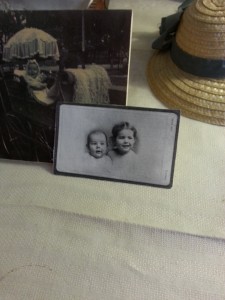 are Hemingway family photos on the wall, a large mirror, and a period-specific child’s tricycle flanking the doorway. One photograph in particular caught my eye. It showed the Hemingway family in 1905—Marcelline, Sunny, Clarence, Grace, Ursula, and Ernest. Our tour guide asked us if we noticed anything out of the ordinary. Well, Marcelline and Ernest looked very similar in that picture, but I wouldn’t say it was out of the ordinary. I mean, aren’t siblings supposed to resemble each other? Even if a brother and a sister have the same haircut? Well, there’s a story about that. Ernest’s father was a pediatrician and his mother, Grace, believed that it was very prestigious for a pediatrician to have a set of twins. Marcelline and Ernest were close in age, but not that close in age. No worries, she made them be twins anyway. She cut their hair the same and even held Marcelline back in school!

The sitting room was our first stop. There Ernest’s mother, Grace Hall-Hemingway, a singer, performed small concerts and taught piano lessons. The large fireplace, complete with a wooden mantel, was decorated with busts of Lincoln and Jackson and had a cornet hanging from the top corner. The night Ernest Hemingway was born, his father ran outside and played the horn to announce the birth of his son…to his parents who lived across the street. I found myself wondering whether Ernest’s fraternal grandmother knew what the music meant—or if she just thought someone was playing the trumpet in the middle of the night.

On to the dining room! During this time, it was common for adults to eat meals in the dining room while the children ate with their nannies or maids in the kitchen. This wasn’t so in the Hemingway-Hall household. Grace’s father, Ernest Hall, encouraged his grandchildren to join him in the dining room for breakfast. Every morning, he and the children told adventure stories, often surrounding a courageous dog, picking up on where they left off the morning before. It is believed that these mornings sparked young Ernest’s imagination, molding him into the storyteller and outdoorsman that he would soon become. 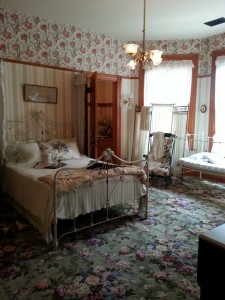 We walked through the kitchen (sadly, I couldn’t get a photograph—there were too many people!) and up the back stairs to the bedrooms. After we saw a bathroom with electricity (!), modern plumbing, and a linen closet, we got to explore the bedrooms. The first room looked very sparse, and rightfully so because it was the maid’s quarters. This room contained a complete inventory of the Hemingway’s possessions—Grace conducted the inventory shortly before they moved out. The next bedroom was similar to the first. It belonged to Grace’s uncle, Tyler. He was a travelling salesman. Ernest and Marcelline loved when he came home because he would tell stories of his adventures.

Next to Uncle Tyler’s room was Ernest and Marcelline’s shared bedroom. Although these aren’t the original beds, they are very similar to those that the children slept in. Since Marcelline was older, she got the ‘big kid bed’ while Ernest slept in the crib. There was a toy box with a little plaque on it in the corner of the room. The toy box contained, among other things, Ernest’s sewing kit. On top of being an animal lover and storyteller, young Ernest was quite kind-hearted and loved mending his father’s pants!

Grace’s luxurious bedroom was attached to the children’s room. This is the very room that Ernest Hemingway was born in. Although Clarence was a pediatrician, they had another doctor come to deliver Marcelline. That is, until the doctor passed out. Clarence was forced to deliver Marcelline, and from that day on, he decided that he would deliver all of his children, including Ernest.

We then walked through a short hallway and into Ernest Hall’s bedroom. I think it was the best bedroom in the house! It was the turret room, looking out over the neighborhood, complete with a hearth, family photos, and outdoorsy, manly things. One of the walls featured a sweet picture of Ernest Hall with Ernest, Marcelline, and Ursula on one of their weekends away in the country.

Clarence’s bedroom was small yet cozy. It was filled with various wildlife specimens. There were starfish, skulls, stuffed mammals, and animal bones. Clarence took special care to educate his children, most notably Ernest, about different animals, encouraging an appreciation for wildlife that Ernest carried for the rest of his life.

When we left the birthplace, it was like a spell was broken and we were back in 2013. We got in the car and explored the area—driving past the high school Ernest attended, his boyhood home, and the Frank Lloyd Wright houses, all in close proximity to one another—it was easy to see how this peaceful neighborhood nurtured young Ernest Hemingway, compelling him to become the writer we continually celebrate.