Tuesday was Charles Darwin’s 204th birthday and I was like, hey, I know about that guy! I’ve never been the kind of person who is especially interested in anything science-related. I mean, my interest basically extends to making manatee habitat dioramas out of shoe boxes in fourth grade and half-heartedly looking at the stars through a telescope with my dad in the backyard. So it was a shock to basically everyone I’ve ever met when I announced that I’d be taking an island biogeography course in the Bahamas in my junior year of college. They said things like, “Marie, you realize this is science right?” and “You just want to go on a vacation” and “A shark is going to eat you when you go snorkeling” and “Hiking is so not your thing.” You know, totally supportive.

I went to Hartwick College, a private liberal arts school in Oneonta, New York and a really great thing about Hartwick was the January Term program. Between the fall and spring semester, students can sign up to take one class on campus, take one class abroad, or just stay home for an extended winter break (if you had enough credits!). I had the opportunity to travel to the semi-deserted island of San Salvador in the Bahamas and complete a biology honors challenge during my junior year. I only had a vague sense of what island biogeography actually was (I sort of paid attention in intro to biology class, guys!) and I was ready for an adventure.
Believe it or not, I actually learned a lot about Darwin in one particular class on 1890’s British literature. I learned about his philosophies, his “bulldog”—Thomas Henry Huxley—his criticisms from the religious community, and his overall affect on society, from literature to music to (DUH) science. So it was with this knowledge that I began my adventure to San Salvador. And, you know what? Even though I knew, abstractly, about Darwin’s time with the finches on the Galapagos Islands, I never really put it together that THAT was island biogeography until I was doing it myself. (Or maybe it was just because I have a deep and inexplicable loathing for birds and I didn’t think beyond the finches.) 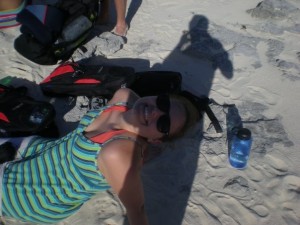 Islands, particularly those that are mostly uninhabited like San Salvador (due to the lack of fresh water), are great for studying biogeography because they represent  the extremes of evolution, making patterns much clearer, especially for un-sciencey people like myself. So, you’re probably wondering how my class actually got to see these patterns of evolution if we were on one island the whole time. Well, we swam to different cays and islands that surrounded San Salvador, that’s how! We took note of the small variations in plants from land mass to land mass, and how the little seedlings are able to travel from island to island in order to take root (on the backs of birds! Bats! Sea turtles! Other animals that aren’t as cute! Through the waves! In the wind!).

Every morning, we went hiking on different parts of the island, taking great care to notice the similarities and differences in the vegetation as we got further and further from the ocean. Every afternoon, we snorkeled at different beaches so we could see how the coral reefs, fish, sea turtles, sharks, crustaceans, and even the shape and feel of the sand differed from one side of the island to the other. We did a night swim where we saw creepy bioluminescent creatures, a couple of days later we swam over the continental shelf (we couldn’t see anything! Nothing but blackness!), and on the last day, we got to swim in the multi-colored world that exists beyond the barrier reef.

I have to admit, while I was there, I didn’t feel like I was learning much. It seemed like a really strange vacation where we stayed in an old naval base (the Gerace Research Centre), complete with old metal beds, communal showers, and DELISH (or not, you know) meals of peanut butter and jelly sandwiches, lasagna with corn in it (yea, corn) and Kool-aid. I came away with a deeper appreciation for nature, an understanding of the extreme diversity in the plant and animal kingdom, particularly that diversity that exists under the sea, and a real grasp on the studies that Charles Darwin presented to the world during the fin-de-siècle before our most recent fin-de-siècle.