Sounds Like Teen Spirit: The Flynn Effect and Teens

Library marketing associate Marie analyzes trends in teen speech and behavior to reveal how the Flynn effect impacts this subculture.

James R. Flynn’s new book Are We Getting Smarter? raises the important issues that IQ scores represent—from the minimum score required for the death penalty to the increased number of women in universities across the country. However, there is one argument in this book that gives me pause. In the chapter “Youth and Age,” Flynn suggests that the “new” teenage subculture that has emerged since the early 1950’s has evolved: “It has always had the power to make its member use an alternative to adult speech. Today it inhibits them from developing the capacity to use adult speech. They have become less bilingual and more monolingual” (106). He clarifies this statement in an article in The Irish Times called “Are you smarter than a 10-year-old?” In it, he states that he worries about young people because “although they are in many ways brighter than their parents (they certainly have higher IQs), they are falling behind verbally.” Flynn goes on to say:

“I think teenagers are distanced from their parents based on subcultures. The word teenager didn’t even exist until 1950. My generation wanted to become adults as fast as we could to get money, sex, motorcars and privacy. Teenagers have that now without becoming adults. And they’ve got their own slang, their own world on the internet, and instead of becoming gradually socialized into the world of their parents, they’re quasi-resistant to it.”

While it’s certainly true that the word “teenager” didn’t exist until 1950, that doesn’t necessarily mean that there wasn’t always a subculture that separated teens from their parents. Yes, the years before the 1950’s were plagued by World War II; and yes, the serious implications of the war did cause many to grow up too quickly, but based on the ever evolving nature of music, technology, and fashion that is inspired by the younger generation in any given decade, there has always been a resistance to becoming like the generation that came before. In the WWII years, teenagers were bobby-soxers who danced the jitterbug, called old-fashioned people fuddy-duddies and money lettuce and I’m sure that their parents were confounded by some of the things they said and did. 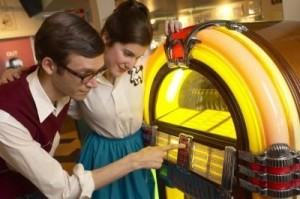 Slang has evolved right with teenagers, but that doesn’t indicate a devolution in verbal skills. The teenage years are about experimenting with identity—which is something that young people do much more freely than adults. With that experimentation come different music, personal style, the evolution of technology, creativity, personality, and speech. Arguably, the evolution of rock and roll has made a huge impact on the brief subculture of the teenage years. Seeing an evolution in language should be no surprise, even if that language exists for only a moment in time, and within a small group of people, aged 13-19. Take, for example, the terms used for an attractive girl—chick (50’s), skirt (60’s), bunny (70’s), fine (as in “she’s so…” 80’s), all the way to valid (as in “she’s so…” 2012). “Cool” has evolved from far out (70’s) to boss (80’s) to the bomb and dope (90’s) to kewl (00’s) and finally landing on fly, hot, and fresh (2012). These terms are temporary and just as those who were teens in the 90’s no longer go around proclaiming things are “dope,” and maybe I sound like a total n00b (current slang term for someone who isn’t up on the latest technology, pop culture, etc), but I can guarantee that current teens won’t be calling things “hot” in two years’ time. They, like each generation before them, will transition into adulthood and graduate from current “hip” terms.

Instead of diminishing verbal skills, the lack of writing skills should be investigated. Having worked at my college’s writing center, I noticed that with each new batch of freshmen came new and interesting writing styles (that I tried, sometimes fruitlessly, to hammer out of them). My students lacked the formal knowledge necessary to convey strong analytical reasoning in their papers. It wasn’t what they were saying that was lost on me; it was how they were saying it. Many times they shortened words—you became u—or they chose to place commas, literally, anywhere, in the sentence, that, they thought, commas belonged? The grammatical inconsistency combined with abbreviated words and phrases weakened their arguments, which is a shame because they were oftentimes very creative and strong.

It seems, then, that it’s not a verbal inefficiency at all that separates teens from the adult world, but a grammatical and technological barrier does exist on both sides. If anything, the fact that teens use words like “Photoshop” “tweet,” and “Google”’ as verbs shows that their vocabulary is expanding rather than diminishing.  To use Flynn’s own words in his New York Times op-ed, teenagers’ minds are just “more modern” than their parents. They need to learn how to use the copious amounts of technology at their disposal that will benefit them intellectually, which will ensure their transition from their “subculture” to actual adult life.