On the Road for The Letters of Ernest Hemingway, Part One: The Pacific Northwest

For This Side of the Pond readers who couldn’t attend one of the recent West Coast bookstore events for The Letters of Ernest Hemingway, we wanted to share some of the highlights with you. In five days, general editor Sandra Spanier managed to squeeze in six events at some of the most wonderful bookstores in the US.

Associate Director Melissanne Scheld managed to keep pace with Sandy, and reported back the following. . . .

Despite one incident each of my driving on the wrong side of the road AND driving on the sidewalk (!), Sandy managed to arrive at her inaugural event, at the venerable Powell’s. Close to one hundred Portlanders showed up on this rainy afternoon. Sandy has an encyclopedic knowledge of Hemingway and covered an amazing range of topics. Of course, Sandy also read from some of the letters: She read a heartbreaking one from Ernest to his friend after he was dumped by Agnes von Kurowsky during WW1. One of the (many) beauties of The Letters of Ernest Hemingway is how it presents Hemingway as a real person with the same excitements and disappointments we all experience.

Powell’s was a real joy—the perfect way to start Sandy’s tour. The Events Coordinator Kevin Sampsell couldn’t have been more accommodating in helping Sandy prepare and the questions audience members asked were equally compelling. When asked what surprised Sandy the most about researching Hemingway’s letters, she shocked the audience by revealing Hemingway colored and permed his third wife’s hair. He was quite interested in hairstyles.

All kinds of interesting people showed up for Sandy’s tour. When Sandy mentioned in her talk that Hemingway owned an ironic rubber stamp that read “I never write letters,” during the Q&A a charming gentleman held up a small paperback and showed the title page which had the same stamp—cool! The book was a collection of Hemingway’s short stories translated into Russian; it cost the owner less than fifty cents about a decade ago. People chatted with her, they bought books, Sandy signed books–all in all it was a great event.

Thanks Portland and thanks Powell’s for being such enthusiastic hosts!

Double-duty day as Sandy’s schedule included two events: a private session for the good folks at Amazon and later, a visit to The Elliot Bay Book Company.

Cambridge’s long time vendor manager at Amazon (and good pal) Elaine Bongiorno met Sandy and took her over to the Fishbowl event. During lunchtime, Amazon invites authors with exciting new books to chat with staff members. Despite the fact that it was Halloween, it seemed lots of Amazon folks are also Hemingway fans.

For instance, someone asked, “Will the letters change how people see Hemingway?” Sandy replied that the letters present a lot of raw data which differ from how we view Hemingway. She pointed out his experiences during WWI: Readers familiar with A Farewell to Arms would assume Hemingway held very different feelings about WW1, perhaps even cynical and disappointed feelings. Yet on the contrary, the letters show how very proud Ernest was to serve in the Red Cross during WW1. Many describe how honored he was to wear the uniform and what a noble cause he was supporting. It seems clear in the letters that this was a positive, character building experience for the young man. So, the letters show a new side of the author and reveal a much more complex person than previously described.

Sandy – and Cambridge – very much appreciated so many Amazon staff taking the time from their busy days to join in the conversation; hope you liked the candy!

After a brief walk around Pike Place Market, it was off to the second event of the day. It’s no wonder the Elliott Bay Book Company is known across the country. The staff, the selection, the store itself – all were very impressive. Dave Wheeler, Sandy’s host for the evening, set up a cozy space for the author chat, and it filled up very quickly.

Even though this was already the third event, the questions asked were quite different than from those at Amazon and Powell’s. One guest asked about Hemingway’s relationship to alcohol. His image is so tied to drinking, but is there more to that? Sandy explained that he came from a tee-totaling family in Oak Park (a dry town) but that he was extremely disciplined. He never drank while writing for publication and took his work very seriously. He spent several very focused hours each morning working but than spent the afternoon away from his desk.

A woman asked Sandy about her “emotional intake” from spending so much time with Hemingway. Sandy admitted to knowing him very well, from being very familiar with his inner thoughts and feelings; too much of Hemingway’s persona has been shaped by the older, more iconic personality. He was a very appealing young man, very ambitious and eager to see the world, but that often gets lost in his macho mythology. His work is not tough; his characters, male and female, are very vulnerable. And then she simply added, “He’s a great writer.” 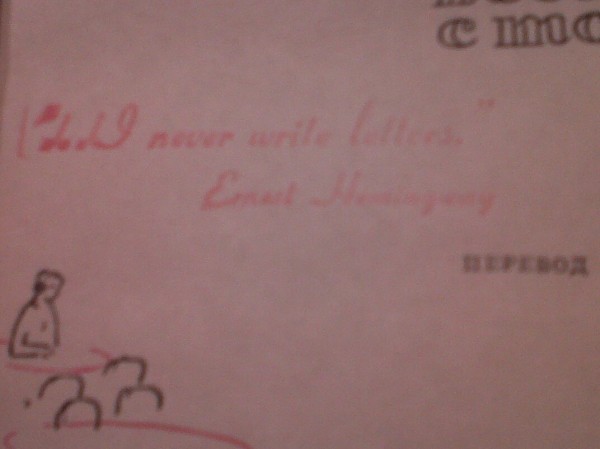 The title page of a Russian edition of Hemingway’s short stories, stamped with “I never write letters–Ernest Hemingway.”

About the Author: Melissanne S.

Melissanne is the associate director of sales and marketing in Cambridge's New York office....