The Fifteenth Anniversary of the Srebrenica Genocide: Marš Mira (Peace March)—Part One of a Series 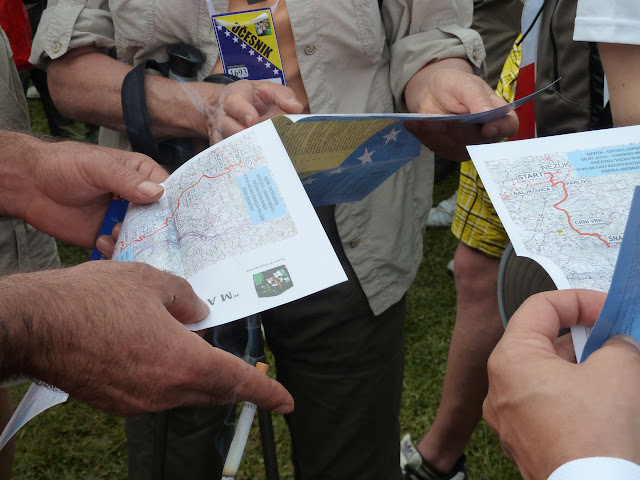 Map of the Peace March, Nezuk

The three-day commemorative “peace march” began on the morning of July 8 with throngs of participants, some of whom had already camped out the night before and others just arrived, gathering in a field near the village of Nezuk. This was to be an inverted journey: the participants were to retrace the grueling trek made by the column of 15,000 Bosniak men and boys fifteen years before. They started from the point of survival for those who broke free into the territory controlled by the Army of the Republic of Bosnia and Herzegovina; then, with each step and each hour, they made their way through the hills, valleys, woods, and villages–the land the column traversed, where it was ambushed and cut off, where some 6,000 men and boys (out of the over 8,000 victims in total) perished en route to safety, either captured and killed by the Army of Republika Srpska or, wounded and weak, died along the way. It was a march to commemorate their suffering and their courage that would end at the Srebrenica-Potočari Memorial Center, some 110 kilometers away.

A reminder of war’s imprint, day 1

Among the participants were survivors from the original trek. Bosnians of all generations, men and women, boys and girls, joined their ranks as did foreigners from across the globe, including Europe, Canada, and the US. Turkey had a strong showing, at least if the abundance of the bright red star and crescent flag was any indication. Hiking enthusiasts, youth groups, even a local mining company had come to express their support for the Srebrenica community.

So much of the commemorative activities around the Srebrenica genocide involve movement into and across space, pilgrimages of remembrance to places weighted by the specter of past violence. And yet for as sad an occasion as it was, the march tempered the haunting memories and imaginings of its participants with moments of kindness and camaraderie; with sweeping vistas of lush, verdant hills; with warm food and cool water drawn from local wells.

If ever there was a quintessential Bosnian march, this must be it: where else would you find fildzan (small porcelain cups) of steaming black coffee offered to weary hikers as they passed through villages? The hospitality was soul stirring. An old woman held forth a tray of homemade pastries, “Bujrum!” And then the smoking! We’re talking thousands of packs of cigarettes. Only in Bosnia would self-described chain-smokers attempt a three-day, 100 plus-kilometer hike up and down hills in the middle of summer. 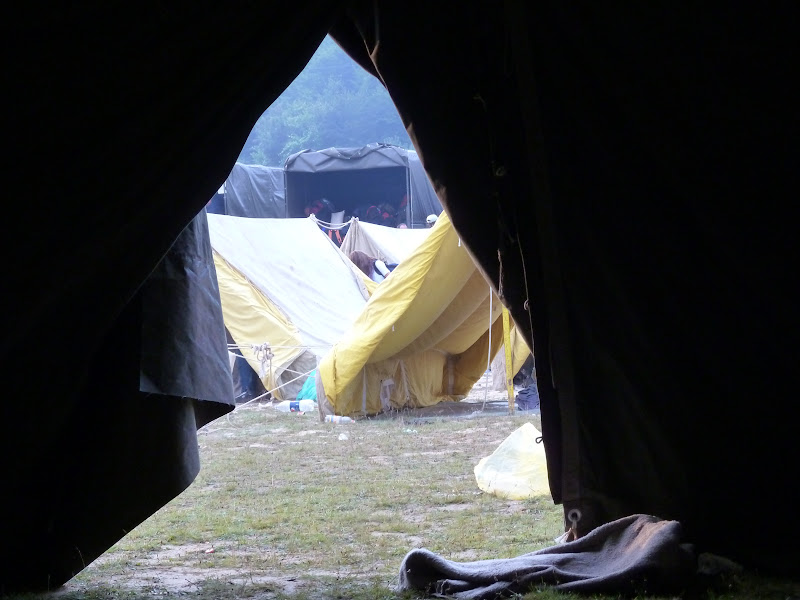 The view from inside the women’s tent

Evenings were a time of respite when the participants rested their blistering feet and filled their stomachs. The marchers were lodged in a veritable refugee camp–from the pale turquoise UNHCR tents that cropped up throughout the clearing to the army-style grub of beans and goulash and the scratchy woolen blankets that served as bedding and cover. Both mornings, the group awoke to the sounds of the sabah, the first of the five daily Muslim prayers, and the early morning light. Just as quickly as it was erected, the camp was dismantled and the marchers were on their way again.
As the participants approached the final destination on the afternoon of day 3, people grew quieter and a calm settled in. There below was the memorial center and its neat rows of white tombstones. The sense of the inverted journey reappeared: a reverse course and a safe arrival to the graves of those who died on that same path. Walking through the gates of the memorial center and past the stone panels inscribed with the names of the victims, each in their own way, the participants acknowledged how this trek had left an indelible footprint on their own lives.
Lara J. Nettelfield and Sarah E. Wagner are the authors of Srebrenica in the Aftermath of Genocide (New York: Cambridge University Press, forthcoming) 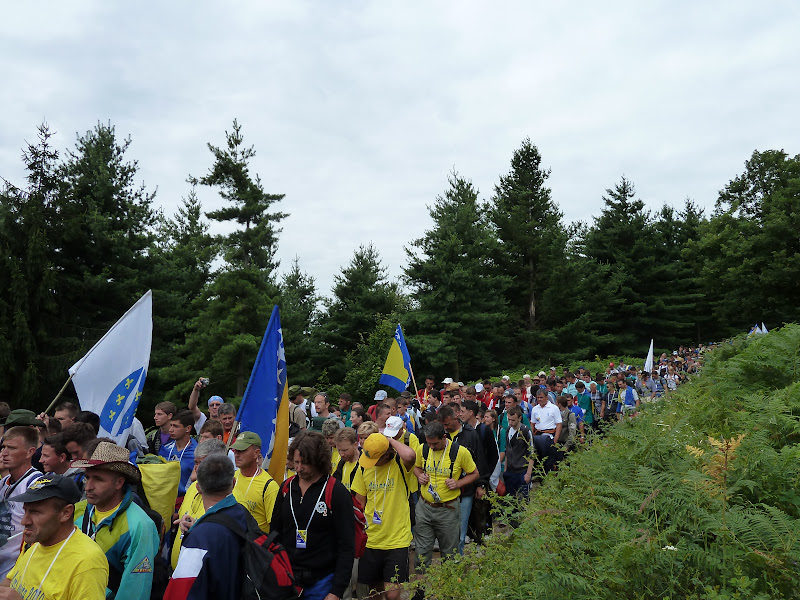 Marchers set off on day 1 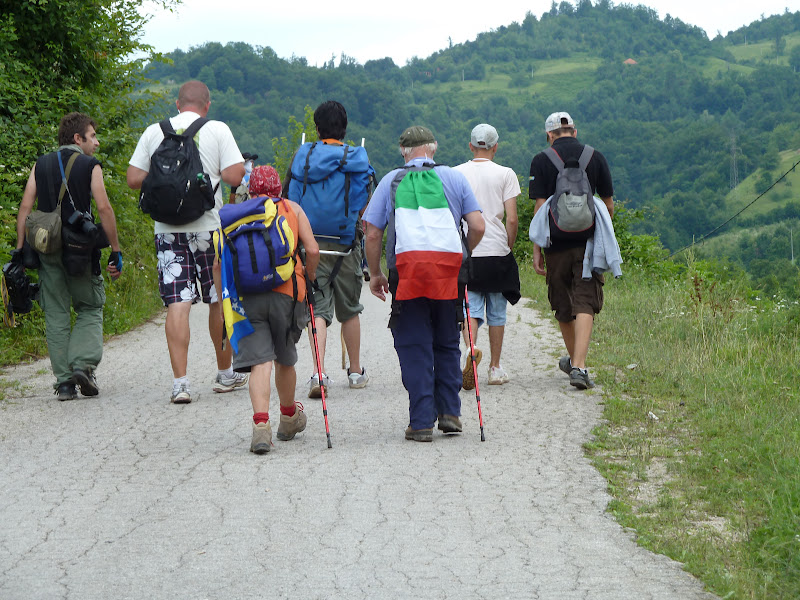 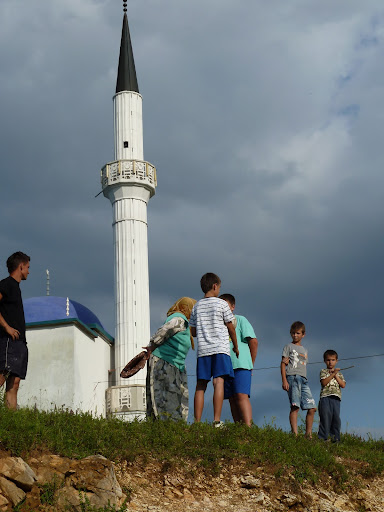 Children stand in front of a mosque to watch the marchers

Crossing a bridge near Glodi 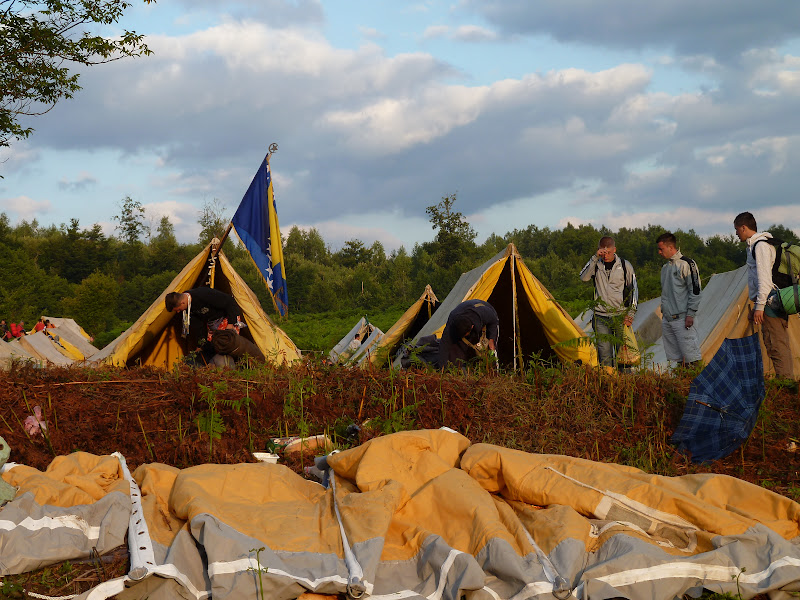 Campsite at the end of day 1 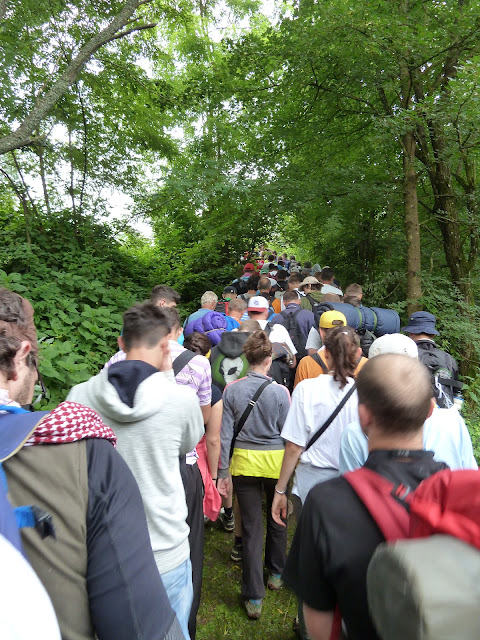 Setting off on day 2 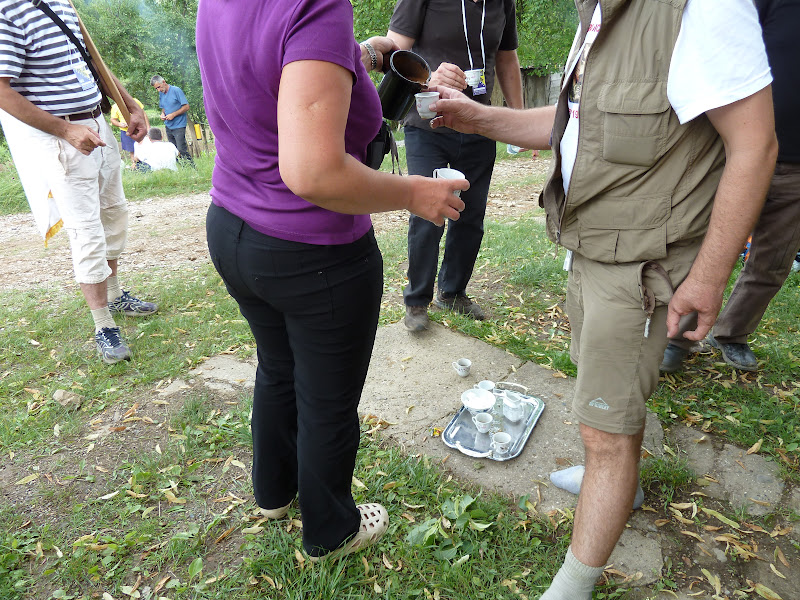 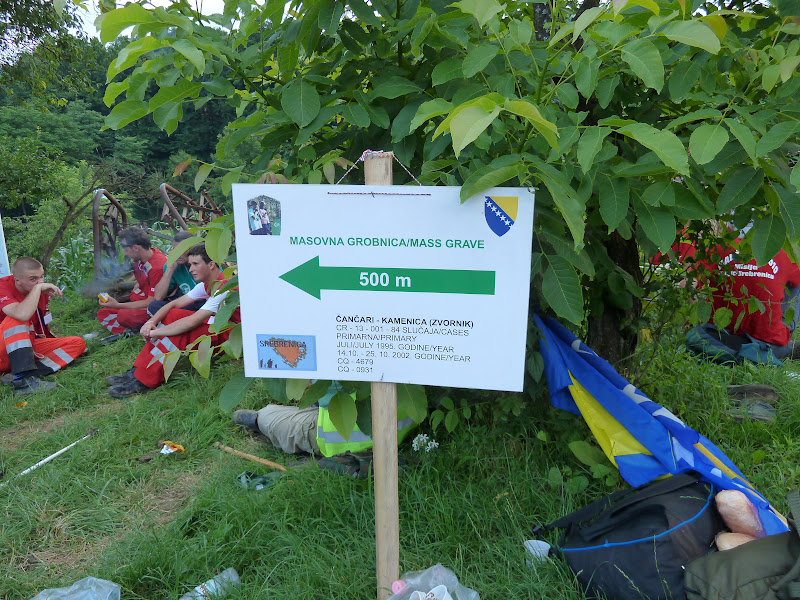 Medics rest near one of the Kamenica mass graves 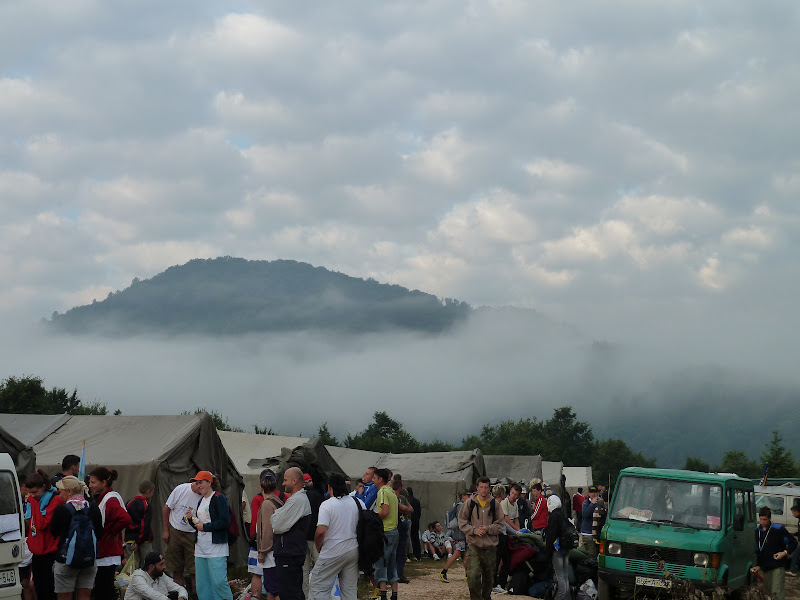 Day 3, the camp near Konjevic Polje 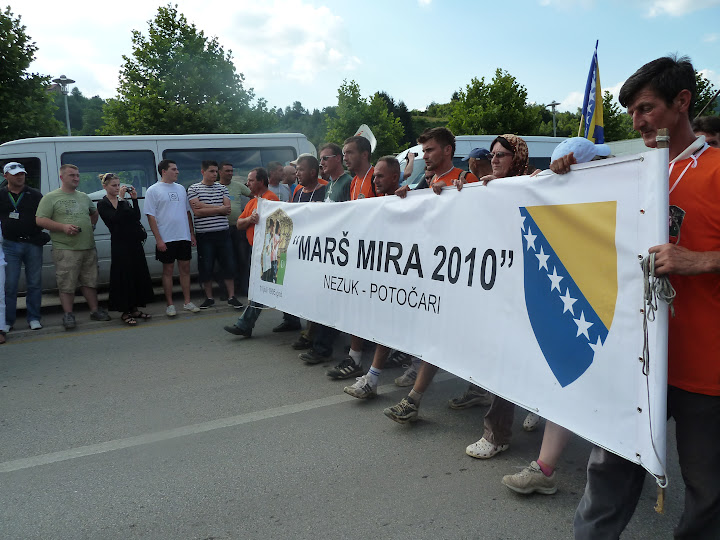 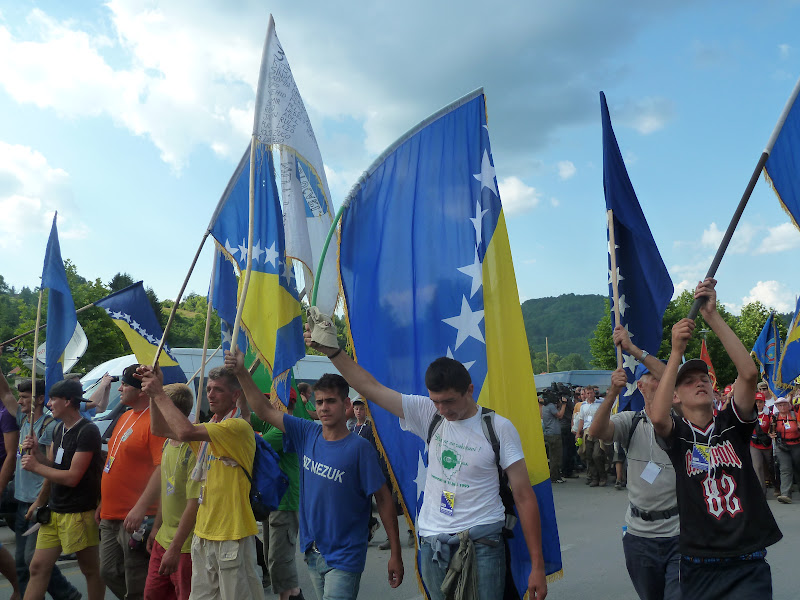 A show of national spirit 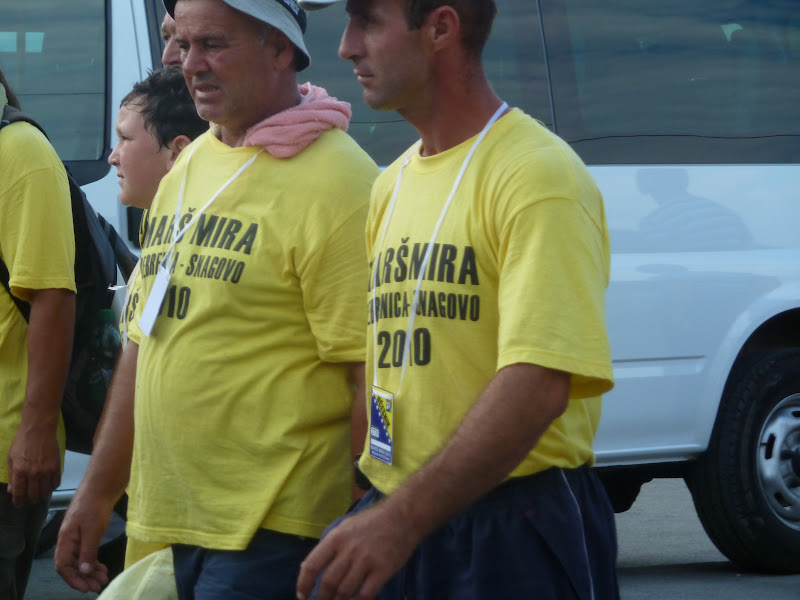