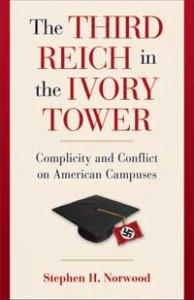 Over 20 American colleges sent delegates to Nazi Germany in 1936. It was just a few decades ago that elite education institutions in this country were placing quotas against Jewish students, encouraging students to visit Nazi Germany on exchange programs, refusing to hire Jewish refugee scholars fleeing Hitler, and punishing both faculty and students who protested the school’s friendly relations with the Nazi regime. In his book, The Third Reich in the Ivory Tower, Stephen Norwood details the climate of an academic world sympathetic to 1930s Naziism.  Hadassah’s review is found here.

Watch as Steven Norwood discusses the situation at American universities at The Vidal Sassoon International Center for the Study of Antisemitism at The Hebrew University of Jerusalem (first 40 minutes).

Stephen Norwood on American Universities attitudes towards the Nazis

About the Author: Stephen H. Norwood

Stephen Norwood is the author of The Third Reich in the Ivory Tower: Complicity and Conflict on American Campuses (2011) and View the Author profile >