Written by: Robert B. Talisse

Political commentary proceeds by means of debate rather than report today. 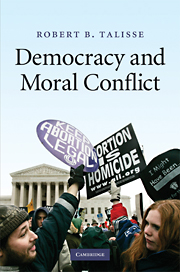 This is an understandable consequence of the new technology, which makes engagement easy. The heightened exposure to debate is a good thing, too. Open debate is democracy’s lifeblood. Yet popular political disagreement has taken on an odd hue. Rather than presenting facts and professing a view, commentators present views concerning the views of their opponents. Despite heated disagreements over Big Questions like healthcare, stem-cells, abortion, same-sex marriage, and global warming, we find a surprising consensus about the nature of political disagreement itself: All agree that, with respect to any Big Question, there is but one intelligent position, and all other positions are not merely wrong, but ignorant, stupid, naïve. A minute in the Public Affairs section of a bookstore confirms this: Conservatives should talk to liberals “only if they must” because liberalism is a “mental disorder.” Liberals dismiss their Conservative opponents, since they are “lying liars” who use their “noise machine” to promote irrationality.

Both views betray a commitment to the Simple Truth Thesis, the claim that Big Questions always admit of a simple, obvious, and easily-stated solution. The Simple Truth Thesis encourages us to hold that a given truth is so simple and so obvious that only the ignorant, wicked, or benighted could possibly deny it. As our popular political commentary accepts the Simple Truth Thesis, there is a great deal of inflammatory rhetoric and righteous indignation, but in fact very little public debate over the issues that matter most. Consequently, the Big Questions over which we are divided remain unexamined, and our reasons for adopting our different answers are never brought to bear in public discussion. And what passes for public debate is no debate at all. No surprise: debate or discussion concerning a Big Question can be worthwhile only when there is more than one reasonable position regarding the question; and this is precisely what the Simple Truth Thesis denies.

This is difficult because we feel invested in our own Big Answers. But it’s a fantasy to think that the billions of people with whom we disagree have all simply failed to appreciate the facts. This fantasy is easily dissolved once we come to realize that those who reject our own Big Answers often give good reasons for their views and against ours. We might not find ourselves convinced by their reasons, of course, but we can no longer see them as ignorant or foolish. The lesson to draw is that there is a difference between being stupid and being wrong; the most important truths are often the most difficult to discern, even by the most careful and sincere inquirers. This lesson dismantles the Simple Truth Thesis and leads us to acknowledge that although there may be but one correct answer to each Big Question, there are several defensible views concerning which of the going answers is, indeed, correct. So if the Big Questions matter to us, we should be most eager to hear the reasons of our opponents. We should pursue real disagreement, with real interlocutors, not the cooked-up arguments against caricatured opposition on offer from the political commentary industry.

Democracy is the proposition that a just, peaceful, and morally decent society is possible among equals who disagree over Big Questions. Democracy tries to enable such a society by maintaining the conditions under which citizens could reason together, and, despite ongoing disagreement, come to see each other as reasonable. Citizens who see each other in this way can agree to share in the task of collective self-government despite ongoing discord over Big Questions. The Simple Truth Thesis repudiates this ideal. Accordingly, as our politics become more argumentative, they become less concerned with actual argument. Yet if we lose our capacity to argue with each other—to confront openly each other’s reasons—we will lose our capacity to see each other as equal partners in self-government, and thus we will lose our democracy.

About the Author: Robert B. Talisse

Robert B. Talisse is author of Democracy and Moral Conflict (2011)....