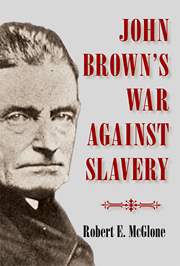 John Brown’s militant abolitionist crusade changed American history. His actions during the guerilla war in Kansas Territory from 1855 to 1858 sparked both violence in Kansas Territory and Missouri and philosophical debate across the nation. Brown escalated the debate over slavery to the point that it sparked the Civil War via his raid on Harpers Ferry on October 16, 1859. Brown’s contemporaries and historians have been debating his motivations to take up arms against proslavery forces since he unsheathed his sword against slavery in Kansas Territory.

Robert McGlone’s work is well-researched and he writes in a stimulating academic style that reflects an effective understanding of the historiography of John Brown scholarship. Readers will have to do prerequisite reading of a chronological biography about John Brown to be able to appreciate McGlone’s work. His study is almost pure analysis, which requires preliminary knowledge in order to comprehend McGlone’s in-depth analysis of John Brown’s motivations.

The traditional assessment of John Brown’s motives is that he was moved by his Calvinist Christian religious beliefs to begin his abolitionist crusade. His violence was a product of the belief that he was God’s agent on earth, and he was called by God to fight slavery. He did so largely on his own, eschewing family, friends, and supporters’ advice to moderate his abolitionist campaign, and thus committed violence in the prosecution of his militant efforts to combat proslavery forces. Virtually every contemporary and historian interprets Brown’s motives in this religious light, from Richard Hinton’s John Brown and His Men (1894) to Evan Carton’s Patriotic Treason: John Brown and the Soul of America (2006). Brown scholars typically utilize the same body of evidence, a collection of observations by Brown’s contemporaries and letters from John Brown’s era to prove their arguments. Brown’s contemporaries and historians utilize these sources to the point that most works about John Brown are so predictable that it is possible that the reader can successfully prognosticate where the author is going from the first chapter of each work.