Chris’ article got me thinking about the deceptively simple task of reading, and so I thought it may be appropriate to share my own experience with this challenge as of late. 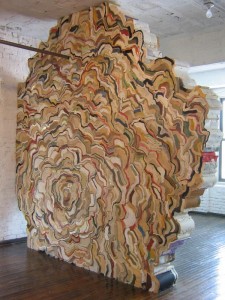 We’re all familiar with the evil, frustrating syndrome that is writer’s block. Let me jog your memory: you sit down, ballpoint pen in hand, bursting at the seams with creativity and ambition, prepared to get to work. It may be an academic paper or dissertation that you’re grappling with, or perhaps you’re trying to write a poem, or work on your first novel. Whatever the case may be, your goals are in order; all that’s left is the writing part. The hardest part, that is. Because regardless of how brilliant you are, how unique your ideas and how colossal your capacity for Green Mountain coffee, the fact is that sometimes the right words just don’t come. Now this may sound odd, but sometimes I find myself in a similar position when it comes to reading, a seemingly passive act in comparison. And I am definitely not one of those people who cannot bring myself to pick up a book for leisure, something other than the stuff assigned for class that we can often Sparknote our way out of if needed. No, I am a loyal lover of the novel, and usually have minimal (if any) trouble breezing through hundreds of pages in size 8 font of a story that piques my interest. But alas, in recent weeks I’ve found it increasingly difficult to focus on a text for more than a few minutes without promptly getting distracted. And so I’ve come to the conclusion that the only appropriate diagnosis for this malady is to classify it as a dreadful case of Reader’s Block.

A couple of weeks ago, the day prior to leaving for a brief trip abroad to attend a family wedding, I perused the shelves of the Cambridge “Library of Magic” in search of the perfect book to accompany me on my journey. For me, the “ideal position for reading” is usually while in transit, and with 17 combined hours on two planes to look forward to, not to mention the three hours in between flights, I thought it best to prepare myself with ample reading material. So in addition to the latest David Sedaris hardcover I received many months ago as a birthday gift, I finally, after careful and lengthy speculation, picked up another title from the makeshift library that appealed to me. With a newfound excitement, I boarded the plane eager to undertake a literary marathon.

Or so I thought.

The first hour airborne is excusable; this is the take-off period, typically followed by one of those alarmingly small airplane meals. But even after my tray was collected, rather than cracking open one of my books, I instead turned on the video screen and proceeded on to watch the in-flight entertainment, a screening of the chick flick “He’s Just Not That Into You” (which I had, at that point, already seen twice). As the movie ended and the final credits rolled, I slept for the remainder of the flight. In London-Heathrow airport, where I could have easily killed my stopover time with one of the two 300-page bricks weighing down my bag, I somehow passed the time touring the same duty-free shops repeatedly. Needless to say, I didn’t touch either novel on the subsequent flight either. For some reason, the act of reading had become a chore to procrastinate rather than an enjoyable activity. I was stuck.

While in India, much of my days were preoccupied with preparations for my cousin’s wedding and catching up with a number of long-lost relatives. During this time, I once again took out my paperbacks in a vain attempt to occupy the jet-lagged, sleepless nights with some mental stimulation. Somehow, staring at the ceiling in insomnia during the wee hours of the a.m. proved infinitely more appealing. The return trip to New Jersey was equally futile. My books sat mocking my lack of motivation, consuming space and collecting dust as I opted instead for a Bollywood film on the first flight and my dying iPod on the second.

…the billboard ads changed from Z-100 to Hoagiefest, and I found myself rereading the first few sentences over and over again.

A cure commonly recommended for writer’s block is to put away your materials for a little while, go elsewhere and distract yourself with other matters before returning to work. Applying this remedy to my own situation, I took my first couple of days back in the States to deliberately not read, hoping that maybe I had just been trying too hard and that by the time I returned to the Press the following workweek, I would be refreshed enough to get back to my normal self and read with ease during my commute home. I got on the bus at 5:45, prepared for the long ride, book in hand, determined this time around. Upon leaving the Holland Tunnel, I opened to Chapter One and started to read. So far, so good. But progress slowed, and as I got closer to home, came to a plateau altogether. 7 o’clock rolled around, the billboard ads changed from Z-100 to Hoagiefest, and I found myself rereading the first few sentences over and over again. Nearly 90 minutes had passed and I had accomplished nothing.

Author Gabriel Garcia Marquez says (regarding writing), “One of the most difficult things is the first paragraph. I have spent many months on a first paragraph, and once I get it, the rest just comes very easily.” Could this be true for reading as well? Perhaps we underestimate the actual effort that goes into reading a novel, because although writing may involve more physical activity, reading requires just as much concentration and mental focus. Or, maybe we have grown so accustomed to constantly dividing our concentration between activities that our attention spans have dwindled and our minds have become increasingly vulnerable to distraction. It feels like ages since I last picked up and read a novel, simply for the fun of it. Perhaps I should take Marquez’s words of wisdom into consideration, and make the first paragraph the first step. If I can just get through that initial chunk, maybe the succeeding pages will be smooth sailing. In fact, I’m going to try it as soon as I submit this post and leave for the day. Hopefully, when I ride the bus tonight, I will have finally discovered the cure for Reader’s Block. Wish me luck.

For those still struggling, Jessa Crispin has further suggestions. –Ed