Cosmic Explosions You Can See

The biggest bang we know of since the Big Bang was confirmed last Thursday, February 19. It’s Gamma-ray Burst (GRB) 080916C, spotted by NASA’s Fermi Gamma-ray Space Telescope at 7:13 pm EDT on September 15th of last year. Scientists knew right away that it was an extremely powerful burst, but further study has shown that it’s the biggest ever seen, originating more than 12.2 billion light-years away. For more details, read NASA’s report here. GRBs are thought to occur when massive stars run out of nuclear fuel and collapse into black holes. Fermi has only been operational for about eight months, and it’s already found a record-breaker. Who knows what else it will show us? 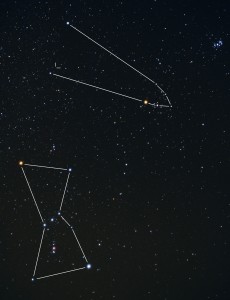 Gamma-ray bursts, powerful as they are, don’t last long. A ‘long’ GRB usually lasts from about two seconds to a few minutes (GRB 080916C broke another record: it lasted 23 minutes). This means that it’s very unlikely most average backyard astronomers will ever get to see one.

Still, there are exploding stars that you can see, even in a beginner’s scope. ‘Supernova remnant’ (SNR) is the very accurate name used to describe the expanding clouds of material left by stars after a supernova collapse. In a very real way, they are the continuous explosion of the star. They don’t last long, either, at least in cosmic terms: after several tens of thousands of years, the material spreads across such a wide area that it fades from view. There are at least two SNRs that are within reach of small scopes. One is small and fairly easy to find; the other is large, faint, and a challenge.

M1 was the first object recorded by Charles Messier in his catalog of objects that he thought might be confused with comets. Messier was an eighteenth-century French astronomer who had a passion for hunting comets. He compiled a long list of objects spotted through small telescopes, and then accurately mapped them so he and others would not mistake them for new comets. The Messier Catalog has become one of the most popular lists of objects among amateur astronomers because all are within reach of even modest modern scopes. It includes galaxies, nebulae, and star clusters, both open and globular. M1 is the only supernova remnant Messier found.

In smaller telescopes, M1 — popularly known as the Crab Nebula — is not very impressive. It looks like a slightly elongated fuzzy patch, about six arc-minutes by four (the moon is 30 arcminutes in diameter). Still, think about what it is: the remains of a supernova bright enough to be seen during the day in the year 1054. The event was recorded by both Chinese and Arab astronomers. The Crab is expanding so quickly that changes in its size and shape can be seen in photographs taken only a few years apart; this at a distance of 6,000 light-years! 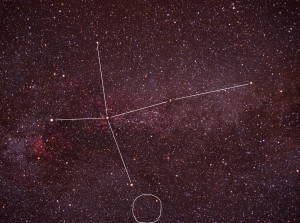 M1 is fairly easy to find in the sky. It lies about one degree north of the star ζ (zeta) Tauri, which is the star that marks the tip of one of the horns in the constellation Taurus, the Bull (it’s the horn closer to Orion, the Hunter). Click the above photo – M1 is marked by two lines.

The Veil Nebula, though also a supernova remnant, is very different, and more of a challenge to see. This is because it is much older, so has spread thinly across a larger swath of sky, about three degrees wide. It looks beautiful in long-exposure astrophotos, but is hard to view directly. Dark skies are essential, and low power. An ‘OIII’ filter, which blocks most light accept for a narrow band given off by the oxygen in the nebula, is supposed to be a big help, too.

The Veil is in the constellation Cygnus, the Swan. It’s located to the south of the bright star ε (epsilon) Cygni, which marks the southern wing of the Swan.