Barack Obama as a Democratic Man 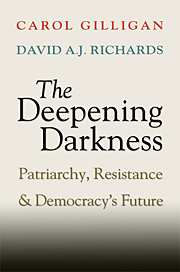 The remarkable manhood of Barack Obama suggests he is as forward-looking on issues of gender as on issues of race, transcending old categories and inviting new understanding and debate. We see this in the number of talented women he has appointed to his administration, including Hillary Clinton as secretary of state. But, we are struck as well by his commitment to listening across conventional political divisions and his desire to forge a politics not based on demonizing enemies. Obama resists hierarchy politically (placing one group over another), because his psychology is not internally divided by the gender binaries of more patriarchal men (for example, a masculine reason, or mind, over a feminine passion, or body). For the same reason, Obama is less vulnerable than more patriarchal men to perceived insults to honor that reflexively elicit violence–thus, his resistance to the Iraq misadventure.

Obama’s background and life story suggest some of the paths to democratic manhood. His predecessor, George W. Bush, was a patriarchal man, “burdened” (as Maureen Dowd observed) “by the psychological traits of an asphyxiated and pampered son.” Obama barely knew his father, developing his liberal and humane values in relationship with his mother and her parents, Toot and Gramps. Both his mother and Toot were strong, adventurous women, loving men while holding to their own ambitions and sense of themselves. Obama stayed in loving relationship to unidealized real women (including a mother who did not sacrifice her intellectual life), and through them came to his own vibrant relationship with a woman clearly his equal. In Dreams from My Father, he identifies a “strong, true love” with an equal as what saves men from the “male cruelties” that destroyed his father. In doing so, he shows us a manhood that is democratic, not patriarchal.

Obama’s inaugural speech makes clear the power of democratic manhood to deepen our democracy. While defining our nation’s challenge—both at home and abroad—as one of building upon “the sacrifices borne by our ancestors,’ he does not idealize American history. In asking us to “choose our better history,” he asks us to remember what we have learned as a people who “have tasted the bitter swill of civil war and segregation.” For Obama, responsibilities arise from relationships, and he emphasizes those not celebrated; “men and women obscure in their labor—who have carried us up the long, rugged path towards prosperity and freedom.” His responsibility to his Kenyan father extends from “the small village where my father was born,” to understanding how and “why a man whose father less than 60 years ago might not have been served at a local restaurant can now stand before you to take a most sacred oath.” But his understanding of responsibility directly reflects what he owes his remarkable single mother as well as Toot and Gramps, as he calls on the American people to show “a parent’s willingness to nurture a child.” He asks us to remember and build upon not falsifying ideals but real relationships: “these men and women [who] struggled and sacrificed and worked till their hands were raw so that we might live a better life.” He calls for new forms of deliberative political intelligence, drawn from real debate between equals in service of real values, “honesty and hard work, courage and fair play, tolerance and curiosity, loyalty and patriotism.”

For Obama, as a democratic man, these values demand the inclusion of all people, “the God-given promise that all are equal, all are free, and all deserve a chance to pursue their full measure of happiness,” a promise he extends to “nonbelievers”: and one he finally defines in terms that dissolve “the lines of tribe,” so that “our common humanity shall reveal itself.” In contrast, Obama rejects as “childish things” a polarized and reactionary American politics that feeds on exclusion, “the petty grievances and false promises, the recriminations and worn-out dogmas that for far too long have strangled our politics.”

Both the style and content of the inaugural address echo, probably self-consciously, the speeches of Lincoln—for Lincoln, the appeal to our universal values of human rights against the anti-democratic values of the proslavery South; for Obama, “the rule of law and the rights of man:” against a reactionary right-wing fundamentalist politics based on “the old hatreds.”. There is both moral passion and the most sober analytical reason in Obama as there was in Lincoln, both men joining emotion and thought in the service of realizing a more perfect union. What strikes us at this moment in American history is the transformative power of democratic manhood. By challenging patriarchal gender binaries and hierarchies, it shows us how childishly undemocratic we have been and brings real democracy again within our political grasp. Only a manhood resisting patriarchy can understand and advance democracy.

About the Author: Carol Gilligan

Carol Gilligan is a co-author of The Deepening Darkness: Patriarchy, Resistance, and Democracy's Future (2008). Gilligan has been University Professor at New York University since 2002. She is also a visiting professor...

About the Author: David A. J. Richards

David Richards is the author of Fundamentalism in American Religion and Law: Obama's Challenge to Patriarchy's Threat to Democracy (2010), and he is the co-author of View the Author profile >