Will President Obama govern as a moderate?

From the Charlotte Observer, January 20

Will Barack Obama govern as a Moderate, a Centrist, or a left of center Democrat?

Every sane person is a moderate in the sense of disliking extremes and striving for reasonableness in their politics. Historic Moderates, men and women whose lives have been changed by the political philosophies of Aristotle, Cicero, and Montaigne, meet a higher standard. They mediate differences and conciliate conflicts at some personal risk or cost. Moderation is a phenomenon of the moment, and moderates either choose their fights carefully or allow themselves to be caught up in moments of peacemaking. Moderation is often equated with Centrism, but the two are different callings. Moderation is a tradition of political ethics while Centrism is the behavioral science of winning and securing power, sometimes by elbowing others away from middle ground.

Six American presidents were historic moderates: Washington, both Adamses, Madison, Lincoln, and Wilson. Others showing flashes of moderate leadership included Monroe, Cleveland, Theodore Roosevelt, and Eisenhower. Too recently for us to be sure, the presidencies of Ford, Carter, George H. W. Bush, and even Reagan and Clinton had moderate moments. 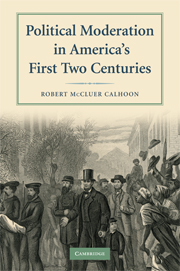 Washington (like Reagan) understood theatrics: his voluntarily surrendering political power when others urged on him unelected kingship. Madison moderated constitutionalism through his mastery of theory and from repenting of two immoderate lapses, one following the demise of his Virginia Plan at the Constitutional convention and another when distrust of Hamilton drove him in the mid-1790s into the camp of Jeffersonian radicalism. Like John Quincy Adams (and Jimmy Carter), Madison had a long, moderate, and influential post-presidential career.

As an academic and a public intellectual, Wilson prepared assiduously for a moderate presidency, though its moderate phase lasted only fifteen months before a more militant progressivism claimed his heart.

Lincoln appeared to be a self-taught, accidental, Moderate, though in reality his immersion in Blackstone and the King James Bible was fully the intellectual equivalent of Wilson’s scholarship on Walter Bagehot and his teaching of Edmund Burke.

Predictably, Barack Obama favors the Lincoln model. He got into trouble when he told Time magazine that “Lincoln’s rise from poverty, his ultimate mastery of language and law, his capacity to overcome loss and remain determined in to face of repeated defeat—in all this he reminded me not just of my own struggles [but] also of a larger fundamental element of human life—the enduring belief that we can constantly remake ourselves to fit our larger dreams.”

The problem here was not immodesty but rhetorical overkill. Mastery of language and law undergirded all of Lincoln’s other strengths, especially his fortitude. Mastery of language in Obama we have seen. And his Harvard legal training and University of Chicago teaching experience auger well for his presidency.

But he has not yet spoken about the law with anything like the penetration and poignancy of Lincoln debating Douglas. Lincoln nailed his colors to the popular “reverence for the laws, . . . breathed by every American mother to the lisping babe that prattles on her lap, taught in schools, written in Primers, preached from the pulpit, proclaimed in legislative halls, and enforced in courts of justice” until it became “the political religion of the nation.”

Like Lincoln in his time, Barack Obama understands to his finger tips what Alexander Bickel, during Watergate, called “the morality of consent” or “imperfect justice, for there is no other kind.” Months from now, when the nation is locked in conflict over, say, health care reform or the costs of nuclear power, President Obama, better than anyone since Lincoln, may be able to remind us that the best legislative remedies may end up satisfying no one, that both parties may have to muster enough humility to come together in permanent emergency mode to acknowledge and confront intractable problems.

Amoral Centrists and battle-hardened Liberal and Conservative partisans may never fully appreciate what Lincoln called, in his first Inaugural, “the better angels of our nature.” But a president attuned to paradox and to the subtle juxtaposition of correctable vices and common sense virtues—Aristotle’s golden mean—can move a nation in the direction it is almost ready to go.

About the Author: Robert M. Calhoon

Robert M. Calhoon is the author of Political Moderation in America's First Two Centuries (2008). Calhoon is a professor of history at the University of North Carolina at Greensboro. He is also the founding editor of the on-line Journal of Backco...