The European Organization for Nuclear Research [CERN] has their Large Hadron Collider [LHC] up and running. The first test-fire was successful. A lot of fearful people fearing the creation of a super-massive black hole are calmer now. Should they be?

In his next post, Majid weighs in on the science vs. religion debate the best way he knows how: not as an evolutionary biologist, but as a physicist. Read it here >>

[UPDATE]: Great to see so many questions in the comments section, which I, of course, am not qualified to address. I’ve contacted Dr. Majid to see if he wishes to answer to any of them. Keep ’em coming!

[UPDATE #2] Please see Dr. Majid’s comment below in response to some of your questions.

Shahn Majid will be filling us in on why these taken-for-granted dimensions of reality hold so much fascination for physicists, mathematicians, theologians, and philosophers.

‘Without spoiling the fun of the piece, I should probably add that I do firmly count myself among those that say ‘no’, LHC definitely won’t produce a giant black hole that swallows up the Earth. For one thing, the circumstantial evidence is overwhelming — much more energetic collisions occur all the time out there in the Universe at large and astronomers don’t see them producing black holes. However, the theoretical issues about the possible production of black-holes and what exactly happens to them if they are produced is a fascinating story that takes us to the edge of our understanding of the structure of space and time…’

There’s nothing like the prospect of imminent death to get you interested, especially considering the usual public interest in hard-core particle physics. This week it was the switch on of the Large Hadron Collider in CERN, Geneva. The BBC, at least, was quick to denounce reports that this might result in the creation of black holes that might coalesce and grow, eventually swallowing up the entire Earth and in the process destroying life and civilisation as we know it.

So that’s what all the fuss is about.

Actually, there will be two particle beams, going in different directions, and only once both of these are working will CERN scientists actually collide them and possibly create black holes. So we don’t know yet. Should we be worried?

Conventional wisdom, which includes all theoretical physicists of any repute, is `no’. But lets take a closer look at what is involved in this doomsday scenario. After all, conventional wisdom in physics has often been spectacularly wrong. It would not be a good idea to find this out now `the hard way’. Suffice it to say that if you are not interested, you really should be. This is not something you want to take entirely on faith. 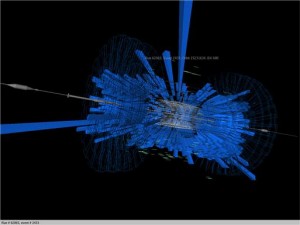 First off, what are ‘hadrons’? Hadrons are things like protons and neutrons that make up the nucliei of atoms but which also can exist in their own right. Protons have a positive electric charge and hence can be manipulated by electromagnets into beams travelling at close to the speed of light. When they collide with another such beam of the opposite direction, the huge energies involved allow all kinds of other particles to be created in the collision. It’s these collision fragments that the scientists at CERN want to study. Among them, should for example, be the elusive Higgs particle.

The main problem has been put forward as the possibility of black holes being created. What are ‘black holes’? Imagine gravity so strong that not even light can escape. Since nothing can travel faster than light, it means that once sucked in, nothing can escape. In modern terms, spacetime is ‘curved in on itself’. This is also why black holes are in principle black. In fact, black holes typically do not appear black because of particles falling in and producing radiation in the process. Also, an effect predicted by Beckenstein and later by Hawking is that black holes are not black for another reason, related to quantum theory. In quantum theory even empty space is teeming with particle and antiparticle ‘quantum fluctuations’. If, say, the antiparticle part of such a fluctuation gets sucked into the black hole, its particle partner would appear to be ejected from it. This also leads black holes to evaporate. For large black holes the rate of evaporation is extremely small but not so for tiny ones. I’ll be saying more about black holes in a later blog.

The doomsday scenario and the scientific response to it run as follows, see an article in the CERN Courier.

So the argument mainly rests on steps 1 and 2. The official position is that step 1 might occur but step 2 makes it safe. In fact, string theorists are naturally quite excited about the possibility of step 1 as it would be an incredible vindication of their efforts.

My own view is that step 2 is suspect as the COMPLETE evaporation of black holes is an assumption and the truth is that once the black hole shrinks to a certain size (the so-called ‘Planck scale’), the approximations made by Beckenstein and Hawking break down. In fact our entire theoretical understanding breaks down and we do not actually know what happens to them after that. This is because we enter the ‘quantum gravity regime’ and contrary to the impression often created in the popular press, scientists do not actually have any theory of quantum gravity. There could well be a ‘quantum pressure’ that balances the tendency to evaporate and results in a stable object that does not ‘pop’. Meanwhile, in my opinion, we just do not know. It is still hard to imagine such microscopic black holes adding up to very much but it is not inconceivable.

I’m only not worried because I do not think that step 1 will occur in the first place. But this is just my personal skepticism. The claim rests on the idea in string theory that the four-dimensional spacetime that we appear to live in is actually part of a higher dimensional continuum. Gravity in the higher dimensions could be much stronger than that observed in the 4-dimensional `slice’ that we live in and as a result black holes might form much more readily than previously thought. Such ideas gained concrete form around the end of the last millennium, notably in the work of Lisa Randall and Raman Sundrum (see Lisa’s popular science book Warped Passages, HarperCollins, 2005)

My problem is that this is all very speculative, there are a lot of ‘ifs’ involved. I remember Lisa Randall from her first year in grad school at Harvard (we were in the same class) and I have great respect for her work. So I’ll be absolutely thrilled if black holes are created in the LHC and if they provide evidence for any form of string theory. However. at the moment, string theory has not had any verified or even verifiable other predictions and therefore remains highly speculative. Until then, the pre-string theory conventional wisdom is that the energies in the LHC are about ten million billion (10^16) times too small to create holes. I’m sticking with that for the moment.

Meanwhile, these issues about the Planck scale are tied in with profound theoretical puzzles, probably the biggest of which is the mystery of `dark energy’. I will say more about that in next week’s post.

Read next week’s post: Science and Religion – the Physics Angle >>