No Justice for Dallas Rape 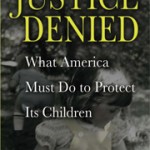 Justice Denied author Marci Hamilton sent me yet another story demonstrating the frustrating position that law enforcement finds itself in when dealing with childhood sex abuse and the Statute of Limitations.

‘DALLAS – While authorities said they have solved the case in the rape of a child in 1983, justice will not be served.

‘Through DNA tests, police said they discovered Dewayne Douglas Willis, a man presently sitting in a Texas prison for burglary, was the man responsible for the crime. However, in three weeks, Willis will walk out a free man with no parole or restrictions due to the statute of limitations.’

It’s another sad example of how the Statutes completely cut off prosecutors for pursuing these cases. But further into the article, some heartening news:

‘Now, DPD, along with Dallas District Attorney Craig Watkins, are pushing for new state laws that would make rape suspects who cannot be prosecuted at least register as a sex offender or have it noted in their criminal history that DNA has linked them to a rape.

‘”This is all new, going into uncharted territory,” Watkins said. “I think here in Dallas and Texas we can be on the forefront of making a real difference in how we progress in the criminal justice system.”‘

Perhaps a step in the right direction, but Marci has a better answer — just abolish the statutes for rape cases.