Do Universities Spend Enough of their Endowments? 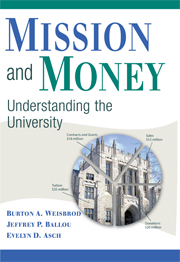 For the most part, they’re nonprofits. So can universities demonstrate their benefit to society?

A New York Times article yesterday reported on a meeting between university presidents and two members of Congress.

Senator Charles Grassley and Representative Peter Welch are both pushing the administrators to spend more of their endowment money to push down rising tuition costs.

Mission and Money: Understanding the University authors Burton Weisbrod, Evelyn Asch and Jeffrey Ballou contributed a report to this roundtable.

It is comparatively easy to mandate minimum payouts from college and university endowments but much more difficult to ensure that such a mandate translates into more affordable undergraduate education. While we acknowledge the government’s right (and, indeed, responsibility) to examine whether nonprofit schools are providing socially valuable benefits that justify their favorable tax treatment, we also believe that the currently fashionable call for mandating minimum payout rates is a dangerous solution that is likely to do more harm than good. There are a number of reasons for this.

First, a mandate applied simply to “large” endowments targets the wrong institutions. Endowments are meant to ensure a school’s future viability in the face of adverse financial circumstances. When ranked by the number of years a school could fund its current expenditures with endowment payouts alone, only two of the largest-endowment schools—Princeton (4) and Harvard (16)—break into the top twenty.

Second, mandating payouts need not mean more aid for needy students. In an increasingly competitive marketplace, any new financial aid might flow to wealthier students as merit aid. Indeed, the extra payout might not fund financial aid at all, but rather administrators’ salaries or a new swimming pool. Preventing this would require that the federal government begin stipulating how a school can and cannot spend its endowment payout. Does it really want to go down this path?

Third, endowment payouts are only one source of financing for universities. If schools are compelled to spend money that they prefer to save, they may seek to bolster those savings through other channels, spending more on fundraising or even reducing financial aid.

Fourth, mandated minimum payouts may lead to creative accounting that renames assets something other than “endowment” so as to exclude them from payout regulation. Such an unintended consequence of regulation could result in overall lower payouts than exist now.

Fifth, targeting large endowments could affect at most a small percentage of undergraduates: the overwhelming majority attend schools with endowments under $500 million.

It is quite appropriate for legislatures to consider when an endowment is “too large” and so should be either taxed or discouraged in some other way. Moreover, we applaud the legislators’ emphasis on increasing the affordability of higher education. Nevertheless, it is our hope that they will consider other means of pursuing this goal.

About the Author: Jeffrey P. Ballou

Jeffrey Ballou is the co-author of Mission and Money: Understanding the University (2010). Ballou is an economist at Mathematica Policy Research, Inc. in Cambridge, Massachusetts. Prior to joining Mathematica, he held facul...